In many cultures a truth is simply bestowed upon the youth as given. You are not supposed to question the authorities, let alone to have new ideas yourself.

The Socratic method is quite the opposite. It emphasizes the process, rather than the end result. In a Socratic dialogue, nobody has the absolute authority. The ultimate truth, or something fuzzily and convergently approaching the truth, is to be co-discovered through the exchange of ideas.

In the internet era, with the advent of communication tools such as twitter, the Socratic method is finding a new significance. Now it is easy to exchange ideas with people over a large physical distance. The sheer density and purity of the dynamics of exchange is contributing to the amassing of the critical mass.

The Socratic method needs to be studied and practiced in earnest, in search of the new principles of distributed enlightment. 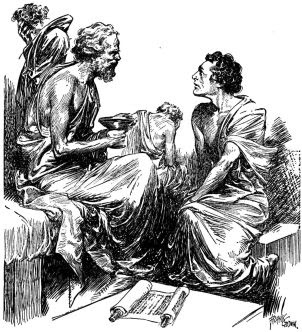 On Thursday, I had a wonderful time interviewing Michael Sandel in Tokyo for a magazine. Sandel's "Justice" (http://www.justiceharvard.org/) is very popular in Japan, as elsewhere in the world. The whole lecture has been broadcast on NHK educational. Lots of people were deeply inspired by Prof. Sandel's passionate teaching.

Prof. Sandel told me how much hard work has been put into the making of the series. Although there are lots of open coursewares on the web, the "Justice" program is unique in the quality of the video work, not to mention the academic excellence.

Although the ambience of the Harvard classroom was one of the key elements in the "Justice" experience, the defining moment came from deep thinking. In the first lecture, after discussing the Trolley car example, Prof. Sandel goes on to deliver a short speech. That's when he says that the purpose of the lecture was to incur a "restlessness of reason" in the students. I almost gasped when it came. The restless of reason has been in me ever since. With Michael Sandel in Tokyo.
Posted by Ken Mogi at 9:39 AM 5 comments:

Which is a good thing.

For a long time, Japan has prided itself as the first nation to modernize in the region of Asia. Despite the terrible and self-brought defeat in the Second World War, Japan has somehow clung to the title of "the foremost in the region." Until recently, that is.

Now Japan seems to have lost all its confidence. In my own perspective, for someone born and brought up in Japan, this shift in the national psyche is needless to say sad, although admittedly tinged with the excitement of new competitiveness.

Personally, in my own life, I have always enjoyed the game of catching up. My home country losing the position of no.1 is no problem for me, especially as I tend to base the value of my own existence and others' independent from any nationalistic thinking anyway.

Recent travel to Singapore (I just got back to Tokyo this morning) convinced me that now the tropical nation of 5 million people is more advanced than Japan in many respects. Especially as regards the immigration policy. I never understood how it is, but some people in Japan are ultra-conservative about welcoming people from abroad as collaborators in society building. As far as I am concerned, people are people everywhere. There is no reason why people from abroad should not be encouraged to come to Japan and enjoy the opportunity for challenge...in a slightly different way from the ethnic Japanese, perhaps, therefore adding to the diversity of people's traits in the process.

As I have stated, I think Japan is losing its self-confidence. Which is a good thing. One always has the chance of reviewing oneself from the external point of view, when one has a crisis in one's self confidence. Most probably, the time for self-doubt and soul searching has come to Japan.
Posted by Ken Mogi at 10:24 PM 5 comments:

Institution is the last resort of a scoundrel.

On the second day at the CUTE center in NUS (National University Singapore), we had another hectic and yet deeply enjoyable time. In the morning, we discussed in the session of Society 2.0, chaired by Penny Low, Member of the Singaporean Parliament. Adrian Cheok and Masa Inakage joined in, adding stimulation to the already heated and heating debate.

In the afternoon, we had a public talk on the NUS campus. The groove was fantastic. Thomas Crampton, social media guru specializing in China and Asia, (Thomas Crampton's webpage) started his talk capturing in video the dialogue with Yair Goldfinger, founder of ICQ. When I asked Thomas what he was doing, he said he was just shooting for youtube. A speaker on stage capturing his own talk for youtube! That was just the right atmosphere for me.

Talks by Yair Goldfinger and Penny Low followed. It was my turn to give a talk. I discussed how the evolving contingency structures on the net was nurturing humanity 2.0. Woo Woontack then gave an excellent talk on augmented reality.

In the Panel discussion that followed, I said something that I would only say when I felt certain that the audience was the right kind and the reception would be electric. I said, just as in the famous quote by Samuel Johnson "Patriotism is the last resort of a scoundrel", nowadays "Institution is the last resort of a scoundrel." Thomas Crampton jibed in, saying that universities should aim to be open to the public as much as possible, as it was the mission of the universities to spread knowledge to the wider society.
There was a memorable response from a man in the auditorium who said that he was living on an island which was 12 hours ride on boat from Singapore, and how he was accessing all the academic information thanks to the internet.

Before we knew it, it was twilight. We had a wonderful party on the NUS campus. At such times, I have a habit of strolling away from the people. When I was admiring the Singaporean sunset alone, I noticed there was another soul looking in that direction. It was none other than Masa Inakage.

At these moments one feels that two souls are resonating. Masa was admiring the same natural wonder with me, without knowing that I was hiding myself in the darkness of night. 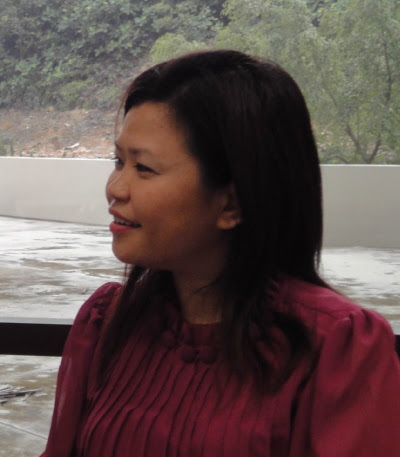 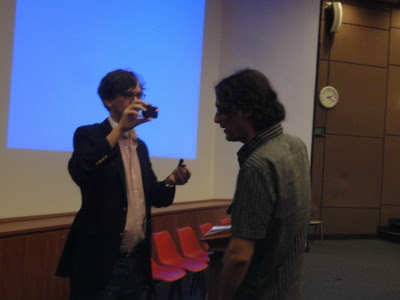 Thomas Crampton capturing his own talk for youtube. Yair Goldfinger is being interviewed. 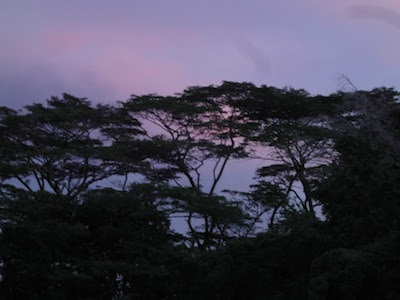 The sunset on the NUS campus. Masa Inakage admiring the same sunset.
Posted by Ken Mogi at 11:06 AM 4 comments:

I kept walking, singing the unsung song of praise.

Since I came to Singapore a few days ago, one of the things that attracted my attention has been the sheer cultural diversity. Chinese, Malay, Indian, Indonesian, and other cultures are mixed in an impressive atmosphere of tolerance and creative fusion.

The other night we were invited by Jimmy, a friend of Atsushi Sasaki, to a sea food restaurant. We found ourselves in the suburb of Singapore, Jurong West, far from any tourist destinations and right in the middle of residential area. It was a rare opportunity to immerse oneself deep in the Singaporean way of life, as it happens unsung, unreported, but full of life under the tropical sun.

When dusk fell, everything seemed to become gentle. There was some magic in the air. As I stood alone in a market place, I felt that one star was too bright to be true. No matter how long you gaze at it, the star did not change its position.

We had a wonderful supper at the sea food restaurant. While eating, I strolled around. There were many manifestations of the different cultures that make up Singapore. Visualization is the spirit of today. Visualization of diversity is something particularly divine and rewarding. I kept walking, singing the unsung song of praise. 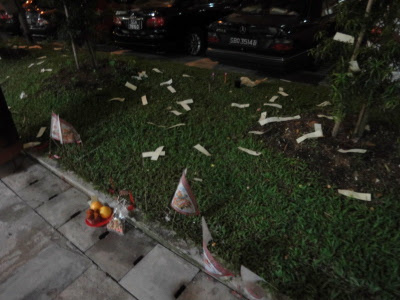 Singapore is such an urban country on the surface. You have the impression that no matter where you go, you find buildings and paved streets. A friend of mine told me that if you go to the Singapore zoo, you will find the land as it was before development, covered all over with jungle vegetations. That gave me an inspiration, without actually visiting the zoo.

During the coffee break of conference at the National University of Singapore, I took a walk. Although I was not aware of my motives, I think I was unconsciously seeking nature.

After a few minutes, I came to the border of development. The flat land that surrounded the buildings ended, and there was a rather steep slope. It was covered thick with trees and plants, something that I had not seen in Singapore before, but something which, when you came to think about it, was only natural in such a tropical climate.

Wandering around, I witnessed several butteflies fly. Welcome to fragments of Singapore before civilization. I cried with joy in my heart. Something came to fruition after all those years. 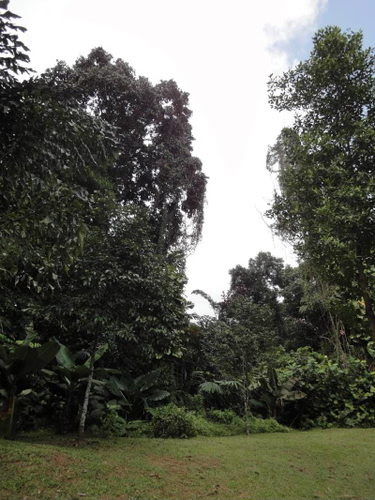 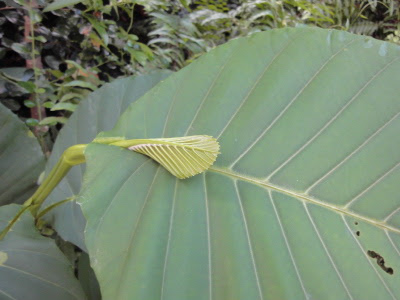 I am in Singapore now, attending a conference at National University Singapore.

I met with Ilya Farber, my neurophilosophical friend now based in Singapore. We were discussing about various matters over Mexican food, when Ilya mentioned about the spirit of rebel in the United States.

Obedience without reason was not appreciated highly in the United States, Ilya said. If you have a reason to do something against the convention at a time, you are encouraged to do so. Rebel with reason is better than obedience without reason. That is the American spirit, Ilya told me while we were enjoying the night breeze of Singapore.

We also engaged ourselves in discussions on the philosophy of pragmatism. What a stimulating night! 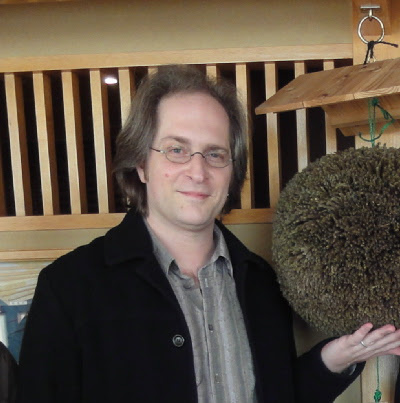 Ilya Farber in a Tokyo restaurant earlier this year.
Posted by Ken Mogi at 7:55 PM 4 comments: