As a kid I used to stay in the blanket, especially on a cold morning.

I would wrap myself entirely in the warm cloth, with only my head sticking out of it. At this posture, the wayward strings and fluffs would be just in front of me. I would watch them in a correspondingly capricious mood, slightly out of focus. Then I would gradually find myself in a virtually isolated state. Cozily isolated.

The world around me disappears. There is just I and the piece of string protruding out of the blanket. I would be immensely happy. Like I was still in the mother's womb. There was nothing to be added, or subtracted. I am in a perfect state of bliss.
Then time passes, and I have to go to the toilet, or prepare myself to go to school. With a sigh and resignation, I would hesitatingly get out of the blanket. Those were the days.

Mornings have become practical nowadays. I seldom get into the blanket mood. When, on a rare occasion, I find myself reluctant to get out of it, I regard it as a special bonus. The spirit of childhood has returned to me.
Posted by Ken Mogi at 7:32 AM 6 comments:

The things that I would like to do, the worlds in which I prefer to be, have not changed so much over the years. The key is how you can be honest about it. We have a great functionality of adjusting to the environment, and that could also be a source of curse sometimes.

Gravitational pull can be enjoyed. The escape velocity for the earth is 11.2 km. Let's see how fast I can run this year.

And let's keep enjoying the small things, like the blossom of violet on the side of the meandering path.
Posted by Ken Mogi at 7:17 AM 4 comments:

The knack is to be struck unawares.

I love the Beatles. The definition of my heaven is when I drive in the U.K. countryside, listening to a Beatles album, preferably St. Peppers or Abbey Road.

My manner of encounter with the music of Beatles was unexpected. When I was 12, I was listening to the radio, and all of a sudden this music just jumped into my ear. I knew it was something quite different from what I had been hearing. That was the Beatles.

The time was 1975. Although by then the fabulous four had already dissolved the group, there were always waves of revival, and I was caught in one of them.

Once, I narrated my own initiation into the kingdom of Beatlemania to the famous photographer Shimpei Asai, who captured many memorable moments of the group's Tokyo tour. Shimpei said that it was an ideal way of getting to know the music of Beatles.

The knack is to be struck unawares. Without any prior knowledge, suddenly you're exposed to a whole new realm of the unknown. It is love at first sight or hearing.

What bliss. Life is full of surprises. You have to wait for one.

Writing this, I am reminded of Miranda's immortal speech in Tempest.

"O wonder!
How many goodly creatures are there here!
How beautious mankind is!
O brave new world,
That has such people in't!"


What a genius is William! How well he captures the blessings of the unknown!
Posted by Ken Mogi at 8:07 AM 3 comments:

I had several dialogues with the artist Shusaku Arakawa in 2006, including one television shoot. The location for the TV dialogue was in the “Reversible Destiny Lofts MITAKA -In Memory of Helen Keller“. The producer was Goichi Hanano.

Shusaku Arakawa is a fascinating person. He speaks with energy and passion, and his words are poems in motion.

Once Shusaku gave a lecture at the Tokyo University of Fine arts and Music. For those who attended the lecture, and for those who subsequently listened to it on the internet through the MP3 file, the talk is now a legend.

I particularly remember the moment when Shusaku cried aloud, noticing that he has inadvertently let out some saliva as he was talking too enthusiastically.

"Look! In that saliva, there are billions of organisms. You see? The world is like that! Full of life!"
The memory of that "full of life!" moment would stay with me for a long long time.

Human memories are strange. I somehow remembered my time with Shusaku Arakawa this morning. 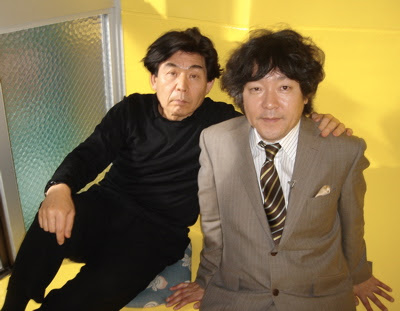 With Shusaku Arakawa in the “Reversible Destiny Lofts MITAKA -In Memory of Helen Keller“, April 2006.
Posted by Ken Mogi at 8:53 AM 3 comments:

It is interesting that intellectuals who are not ostensibly religious are drawn to the life of Jesus Christ. Oscar Wilde, whose life on the surface seems to be one of indulgence and extravagance rather than prudence, came to a deep understanding of the life and teachings of Jesus Christ in his last years. Wilde was imprisoned for a "crime" which by today's standards is nothing but an expression of personal traits best left for discretions. Wilde's De Profundis, written in the prison, delights the reader with the artist's in-depth interpretation of the man that was Jesus Christ.

Leo Tolstoy, the novelist of Anna Karenina and War and Peace, dedicated his later years to writing on Christianity. His book "The Gospel in Brief" had a profound effect on Ludwig Wittgenstein, arguably the greatest philosopher of the 20th century. Wittgenstein carried the book everywhere, and recommended it to people he encountered, so that he came to be known as the "Gospel man".

It is interesting to observe in what context Jesus Christ became an inspiration for these valuable people. It was the principle of individuality. In Jesus Christ we find a man who did not become fearful of obeying one's inner voice even if that was against the common sense and codes of morality of the society at that particular time. Creativity is often proportional to the courage to venture into unbeaten paths, and Jesus Christ provided the ultimate role model.

In the pursuit of individuality, "God" could be a metaphor. God represents that which is unchangeable and ever life-supportive in the battles of individuality in a society where the peer pressures are sometimes too strong and the codes of behavior too demanding.
Posted by Ken Mogi at 7:17 AM 7 comments:

Sanshiro is one of my beloved novels by Soseki Natsume. As I was transferring data into my new notebook computer, I had some time, and was reading an English translation of Sanshiro.

Haruki Murakami writes the preface. What Mr. Murakami says is quite interesting. I quote.

The protagonist of Sanshiro, however, is different. He, too, is unable to find his proper place amid dislocated circumstances, but he never fully confronts those circumstances as a problem within himself. Instead, he accepts them in a relatively natural way, with a young man's particular kind of nonchalant resignation, as something entirely external to himself. "Oh, well, that's how it goes," he seems to say. Stomach pain has not yet entered his world. I think that Sanshiro is a personal favorite of mime because it depicts this natural functioning of the young protagonist's psyche in an utterly mellifluous style. Sanshiro watches life sweeping him along the same way he looks at clouds sailing through the sky. The free movement of his gaze draws us in almost before we know it, and we forget to view him critically.

Here, Mr. Murakami's usage of the "stomachache" metaphor is interesting. It is well known that Soseki Natsume suffered from stomach conditions for most of his career, especially in the late years. It may well be that such physical circumstances influenced what Soseki wrote as a novelist in a profound way, affecting the world view and the manner in which the protagonist of the story moved around in the fictitious world.

In this context, Haruki Murakami himself might be regarded as "Soseki without stomachache".

Sanshiro. Translated by Jay Rubin.
Posted by Ken Mogi at 7:33 AM 5 comments:

Please look in, and follow me if you like what you see.
Posted by Ken Mogi at 8:09 AM No comments:

People have this idea that autobiographies are written by people who have "done it", whose merits and achievements have been more or less established.

There are times, however, when an autobiography is produced in the middle of a career, "prematurely" or too soon according to the above stated criterion.

Richard Wagner's "My Life" (original German title "Mein Leben") was one such autobiography out of context. Covering the composer's life between 1813 and 1864, it describes the often turbulent events and life's courses of the composer of Tannhauser, Lohengrin, and Tristan und Isolde. It was dictated to Cosima Wagner, his second life, in response to a request by King Ludwig II of Bavaria.

At the time of the publication of Mein Leben, Wagner's career was far from over. He went on to compose Die Meistersinger, complete Der Ring des Nibelungen, found the Bayreuth festival, and create his final opera Parsifal.
What was the significance of Mein Leben? I suspect that it led to a resurgence of Wagner's creative momentum at a critical period.

The significance is a psychological one. Looking back on one's past, searching for hidden meanings, discovering latent agenda, understanding one's own choices and coming to terms with one's own self is sometimes a necessary and benevolent process for the creator. In the healing of soul, in the journey into one's spiritual magma there is often a key for a renewed surge of the creative dynamo.

For these reasons, I regard the dictation of Mein Leben as a process of reconciliation and regeneration for the great artist.
Even if one doesn't actually go as far as producing a premature autobiography, reflecting on one's past is surely a panacea for the soul when the waters are troubled and your volcano remains silent. 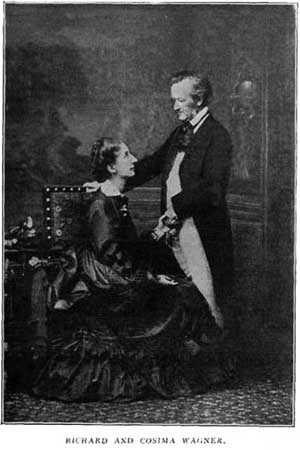 Richard and Cosima Wagner
Posted by Ken Mogi at 8:08 AM 1 comment: