We were originally bound for Washington D.C. Then, at Narita airport, the ANA receptionist told us that air traffic was expected to be disrupted around Washington, due to the forecasted heavy snow. She kindly suggested would we like to travel to Chicago instead, from where we could make connections to Cleveland, our final destination.

This kind of contingency in travel is always enjoyable. I spent the half hour or so waiting for our ticket transfer typing on my laptop on the airport counter.

In Chicago, we found a Chili restaurant. It was morning time in the United States. Expecting to be fed some spicy food, we were disappointed to find that only breakfast menus were available. The coffee was quite enjoyable, though. I guess American coffees are on a steady trend of improvement.

Having arrived in Cleveland, while waiting for the car to start, I am writing this journal.

Just outside the terminal building, I found one interesting sign. It said "Pet Relief Area". Intrigued, I followed the arrows. As expected, there was a small grassland area, where you could find some pet droppings. Smile crossed my mouth as I imagined how relieved these small loved ones must have been, after having gone through the ordeal of an airborne trip.

Now we are going to down town. Our adventure starts here. 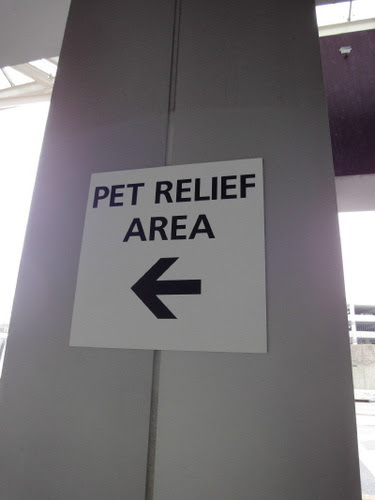 I am bound for Cleveland, Ohio, U.S.A. today. It is on a great lake, and is characterized by freezing weather in winter, or so I hear.

I have absolutely no idea what to expect, but that is exactly what excites me. Nothing is more enjoyable in life than a pure surprise, and I suppose Cleveland would be full of them.

I will post my encounters as they come along in this space, once I am over there in the new world.
Posted by Ken Mogi at 4:25 AM 3 comments:

The Japanese economy is experiencing a prolonged period of depression, starting from the bust of the bubble economy. Some have even called the past two decades as "the lost 20 years."

Because the human brain is well developed and capable of adapting to the environment, it is possible and natural that the Japanese people are experiencing days of low key mentality. The coupling of the national economy and the sentiments of the individuals in this way, however, is certainly not something inevitable.

It is entirely possible to "decouple" one's mental activities from those of the nation. One could have one's own brain "grow" at a high rate, despite the fact that the economy in general is in stagnation.

The leaning process of the brain is open-ended, and one is certainly able to keep learning, as the study materials have become more or less free with the advent of the internet.

The single important wisdom for anyone in today's world, whether living in Japan or anywhere else, is to decouple one's learning process from the social contexts and make it grow rapidly, to achieve one's hidden potentials.
Posted by Ken Mogi at 7:38 AM 4 comments:

When I was hearing the NHK radio this morning, the news reader said that the Vancouver Olympics was just nine days away.
Then I suddenly realized that my favorite town is going to be in the spot light very soon.

My fond memories of the town was associated with festivities from the beginning. One day, Verna took me with Randy and Trevor to the PNE parade. At that time, I had no idea what "PNE" stood for. Later, the knowledge came to me that PNE actually stood for "Pacific National Exhibition". It was a parade of people in colorful costumes, with dragons and other fantastic entities entertaining people as they went along the street.

Then came the Expo 86. I happened to visit Vancouver there at that time. The seaside areas was transformed beyond recognition, and my favorite town appeared somewhat enchanted and a little distant.

Now I am waiting with my heart beating, to see how Vancouver would be transformed in the aftermath of the Olympics. It would surely put Vancouver on the map, big time, while my fondest memories would ever remain with the small time things, like the trips to Dairy Queen restaurants when Verna treated us with chocolate dipped ice cream.
Posted by Ken Mogi at 7:32 AM 5 comments:

I did not need to wear the color any more.

At one time in my life, I quite liked the color orange. To me then, the color seemed to represent vivacity and free thinking. I actually wore orange clothes. My friends laughed at me.

Then, I think the process of internalization started. the color orange started to penetrate into the core of my soul. I learned to live orange, rather than to wear it, and after the learning process was over, I did not need to wear the color any more.

I wonder if a similar process of internalization happened when as a kid, up to 4 or 5 years, I quite fancied the color red, and then ceased to have red items all of a sudden one day.
Posted by Ken Mogi at 7:01 AM 5 comments:

Here are some of my recent tweets.

When your time is up and you fall, you can become a nurse log, and protect and nurture life at large. In forest nothing is lost, even death.

In order to grow, you need to have a root. The difficulty is that the root is invisible and can be quite easily overlooked and ignored.

If humans were able to change shapes like the moon periodically, what a dynamical life would follow. Just imagine that!

The value of diversity, whether biological or cultural, is that you are overwhelmed. You feel small.

To enrich and respect the diversity inside you means that you give up controlling everything. You float on a wave of things.

Having a chat with my philosopher friend Ken Shiotani. Pragmatism is different from utilitarianism, he says.

http://twitter.com/kenmogi
Posted by Ken Mogi at 9:15 AM 6 comments:

The color of sea was something very subtle.

So one day in my twenties, I finally made it to Prince Edward Island. If I remember correctly, I flew from Montreal, and had to land twice before reaching Charlottetown.

After a few hours on the island I discovered that the island is a charmer quite independent of the Anne series.

Most enjoyable was the bicycle ride from Cavendish to North Rustico. It was a seaside road, and the wind blew against your face as you sped along. There were few cars, and you felt quite safe.

One in North Rustico, there were loads of restaurants providing the definite local delicacy, lobster. I sat at the table waiting for the lobster, but quite unexpectedly, something quite different finally won the day. The mussels. The steamed mussels were so tasty that I had to have a second helping, despite the fact that the serving was very generous in the first place.

The color of sea was something very subtle. There was this exquisite gradation from the seashore to the offshore, apparently reflecting the combination of effects due to the water surface reflection and the underlying sand, which was famously and in fact red.
Posted by Ken Mogi at 7:35 AM 3 comments:

Starting the day thus as an idiot

When I was a senior high school student, I was influenced by the German culture a lot. I loved to (and still love to) listen to the works of Richard Wagner, and avidly read the writings of Nietzsche.

I was over 30 when I finally made it to the land of my fantasies. My virgin landing was made in Munich, the town of King Ludwig II. Munich became my favorite destination, not least because of the National theater where you can appreciate the finest performances of operas.

Among the many things that I enjoyed while being in Munich, I must count beer as the foremost joy. I was surprised that the default ordering unit in many beer houses was one liter. When you sit down, and say "Bier, bitte", they automatically bring this huge thing. Another surprising thing is that you are able to consume the thing somehow.

One of my classics was when I visited the Hofbräuhaus in the morning. I believe it was at 10 a.m. sharp. At this early hour, and it was a weekday, there were already some customers.

I ordered the default beer ("Helles!"), and drank from the heavy glass. I had my favorite pratzel. The salt goes very well with the beer.

By the time I finished my second glass, I was completely red colored and merry. When I stumbled out of the beer house, it was broad daylight. I went into the direction of my next destination, although I don't quite recall what it was.

Starting the day thus as an idiot was one of the best things that I ever did while on road.
Posted by Ken Mogi at 9:08 AM 4 comments: