To me, it seems apparent that the nation states are approaching the end of their "good before" period. The NSA scandal in the United States is just the tip of a huge iceberg.
How could democratically formed governments be such monsters? Because they are just showing their true nature. Why do we need nuclear arsenal at all? The MAD (mutually assured destruction) strategy is trivially "mad", as it becomes increasingly difficult to control nuclear weapons in a reliable way (just think of the "rogue" states and potential nuclear terrorists).

For me, it seems increasingly difficult to justify the brutality (symbolized in a newly coined word "privicide") of nation states, just in the name of social contract theories. Nay, I am not advocating anarchy. That would be too trivial. I am just pointing out that nation states are approaching the infamous status of "religion" (sensu Richard Dawkins) nowadays.
Posted by Ken Mogi at 8:58 AM 2 comments:

I must confess I never really liked sports drinks. I know they are isotonic and contain electrolytes, but plain water usually seems to be good enough for me.
This morning I made an exception. I was running and it was hot. I felt that I sweated a bit more than usual. I happened to have some coins in my running shorts pocket, so I bought a bottle of Aquarius, manufactured by Coca-Cola.

Well, I am not too sure about the benefit. I suspect there might be some “threshold” of activity above which sports drinks might be beneficial. I have run three full marathons, and after these races sports drinks did seem desirable. For mild exercises, I am still not convinced.
Posted by Ken Mogi at 10:28 AM 2 comments:


I am a mixture of things.


It was sometime ago when I learned the convenient word “broadcaster”. Yes, I am actually one.

My career became complex when I agreed to host the Professionals program of NHK in 2006. Since then, I have been a mixture of things. I am a brain scientist, writer, and broadcaster.

While I make other plans, I still pursue the holy grail of qualia. I believe the prevalent statistical approaches (all of them) to qualia do not lead to a solution. I am the odd one out.

Meanwhile, I am hosting a program on design and arts with my co-host Asami Kiyokawa. I enjoy the studio shootings, in which I interview creative people from various walks of life.

That’s me. I am a mixture of things. 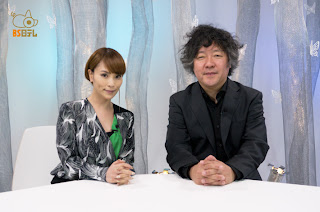 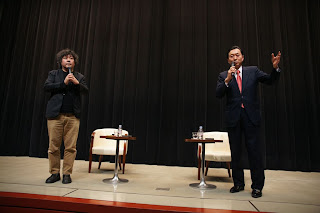 One of the interesting enigmas of Japanese society is that it is kind to an outlier. You may be surprised. You have heard that it is a homogeneous society. You may have been informed that that peer pressure is high in Japan. These observations are certainly true. At the same time, the Japanese society is kind to outliers, aka strange people. As long as they are entertaining, that is.

You may say something really unusual. You may advocate a very unique system of education. You may testify how corrupt the Japanese society is. As long as you provide some entertainment values (the way you say it might be rather cute, or the fact that you believe you can stand up to the status quo might be rather amusing), people don’t really care. They rather welcome you. They put you on tv variety shows. You can give interviews in large circulation magazines.

So as long as you provide some entertainment, giving a safe glimpse into a rather outlandish universe of human nature, people of Japan would welcome you. Actually that is precisely the status that some expatriates living in Japan have come to enjoy, whether they are comfortable with that situation or not.

The problem with this is that you are not really supposed to touch the core of society. It is OK if you say some unusual things about how children should be educated. However, you are not supposed to change Japanese education in any substantial manner. That would be quite another story. There, Japan is surprisingly resistant

There is a popular culture of consuming strangers. This tendency would be certainly true in many cultures on the globe. In Japan it has been made into an industry. It is a mechanism in which the nation is able to maintain the status quo while enjoying occasional distractions away from the norm. People can get bored even in a homogeneous society, you know.
Posted by Ken Mogi at 10:59 AM 3 comments:

Not so cool Japan

The Japanese government is trying to export “cool Japan”, according to some recent media reports. The Ministry of Economy, Trade and Industry (METI) is putting a rather handsome amount of money, to let the world know that Japan is officially “cool”.

It is certainly laudable that the government is finally acknowledging that anime and manga are as important to the nation’s image abroad as automobiles and electronics. It also makes practical sense to try to make some money through the “export” of “cool Japan”, drawing tourists to the nation at the same time.

Among those in the know, however, the government policy package that is being announced under the name of “cool Japan” is being given a weary look. “We’ve seen it happen and then fail before”, is the general feeling. In order for the “cool Japan” policy to become really “cool”, it would appear, a lot of rethinking of the scheme is necessary.

Yesterday, it was reported that the government is trying to issue a special coin commemorating cool Japan. The artists that are to be involved include such attractive names as Akira Yamaguchi, Akira Toriyama, and Hiroshi Senju. So far, so good.

However, when it was reported that the government is putting the inscription “We deliver you cool Japan first” on the coin, it naturally raised quite a few eyebrows. It tasted too much like the “bland” government policies that were announced with fanfares and then went silently out of sight in the past.

If you go back to the basics, it is questionable if any government action can ever become (or indeed should become) “cool”, especially in a market economy. The measures planned to be taken by the Japanese government, at least those announced so far, are so distant from being “cool”. Then do we really need government policy to become “cool” in the first place?

Kabuki is certainly cool, but it became cool not because of, but in spite of, the government at that time. The tradition of male players performing female roles (to such glorious and moving effects) came from the ban of any female on stage by the Tokugawa government. The now legendary manga artists (such as Osamu Tezuka and Fujio Akatsuka) who used to reside in the humble apartment house of Tokiwa-so in northern Tokyo did not have a government grant to accomplish their revolutions.

It is certainly true that an economic stimulus package would work even if it is misguided, as illustrated by John Maynard Keynes when he said "the government should pay people to dig holes in the ground and then fill them up."

Thus, a “cool Japan” policy, even when it is not wise, might actually be better than nothing, even when it is actually a manifestation of “not so cool Japan”. That is the only consolation that one can draw so far from the lukewarm reception that this supposedly brave new policy has stirred.
Posted by Ken Mogi at 8:43 AM 2 comments: