When I was a kid, I really loved to eat watermelons. I would sometimes eat them graciously with a spoon, with all the grace that a boy child could command. On other occasions I would just bite into the red flesh and spit the seeds out, often into the garden, but sometimes in the den.

As one gets older, one grows out of many things, and sadly, in my life, watermelons have been phased out.

This summer, there was a resurgence of watermelons. There seems to be always a tinge of watermelon in my unconscious. When I walk along the street, watermelons pop into my view, and I take notice of them. When I am staying in a hotel, and a buffet style breakfast is served, I seem to be taking more slices of watermelon than usual.

The other day I was pondering this comeback of watermelons in my life. Ostensively, it all started when I chanced upon some watermelons on the night streets during my last trip to China (end of June). The visit reminded me of a novel ("Hometown") by the Chinese writer Lu Xun that I read in my teens. In this novel, there is a beautiful description of the watermelon field.

It must be the connotations of nostalgia and forgotten psychology that kick-started the chain reaction. I am yet to pin down the significance of watermelons in my life. 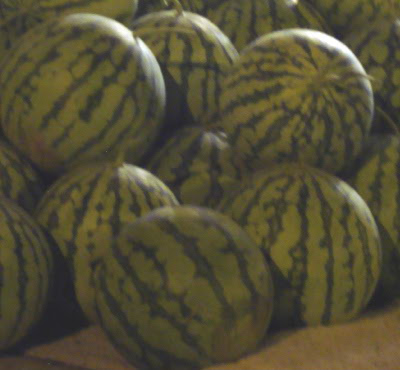 Watermelons on the night street.
Posted by Ken Mogi at 7:56 AM 3 comments:

In the great masterpiece by Soseki Natsume, Sanshiro, there is a humorous passage between Yojiro and Sanshiro, two University students.

Sanshiro, after extending the logic thus far, thought that he has been a bit influenced by master Hirota. In actually, he was not that desperate.

Next day, at the university, the lectures continued to be dull. However as the air in the auditoriums were superficially far removed from the frivolous society, Sanshiro, by three p.m., succeeded to be a member of the Second World, the world of academic endeavors. Sanshiro, thus feeling like a great cultural figure himself, walked to the Oiwake police station when he happened to meet Yojiro.

Yojiro bursted into laughter. Sanshiro's posture of being a serious thinker was disrupted. Even the officer at the police station seemed to be laughing.

"What is it?" Sanshiro demanded angrily.

"YOU tell me what it is. When you walk, walk like a decent human being! The way you step forward, you look like an epitome of ROMANTIC IRONY."

Sanshiro did not understand what Yojiro meant with this western word. Unable to say anything sensible, Sanshiro asked "did you find the lodging?"

"That is why I just visited your place. Tomorrow, we move. You would come and help, wouldn't you?", Yojiro answered.

"Where are you moving?"

Yojiro hurried by. Sanshiro went back to his lodging quickly.

Later that night, Sanshiro walked back to the University library, and looked up the word "Romantic Irony". He found that it was a concept originally put forward by the German poet Schlegel. According to the idea, a genius must wander around all day, without any objectives, without making conscious efforts. Finding what "Romantic Irony" meant, Sanshiro was finally relieved, went back to his lodging and slept.

Ever since I read this passage in the novel in my youth, I have been fascinated by the concept "romantic irony."

Nowadays, in the cognitive neurosciences, the concept of
default network is very much in focus. I sometimes weigh the relation between the default network and romantic irony, and ponder the resonances.
Posted by Ken Mogi at 6:14 AM 4 comments:

Ever since I learned that there was going to be a total solar eclipse in the southern islands of Japan I wanted to be there.

However, these islands are very small and it is difficult to get there. As time passed, and the news about sold-out air tickets and overpacked boats circulated, it became clear that I cannot be on these remote islands on the 22nd of July, 2009.

For a while I thought of flying to Shanghai, where the total eclipse belt would pass. My schedule made it impossible to realize. I had appointments on the days and before and after.

Gradually, I reconciled myself with the idea of observing the partial solar eclipse. I did just that.

On the day of the solar eclipse, I placed myself in a forest and watched the disfiguration of the sun in the sky. As the moon passed between the sun and the earth, the world around me turned into dusk. But not totally dark. Soon the sun began to shine again.

Thus I learned to accept an imperfection in life. I realized that there is certain glory in an imperfection. The lingering aftertaste of unfulfilled expectations. 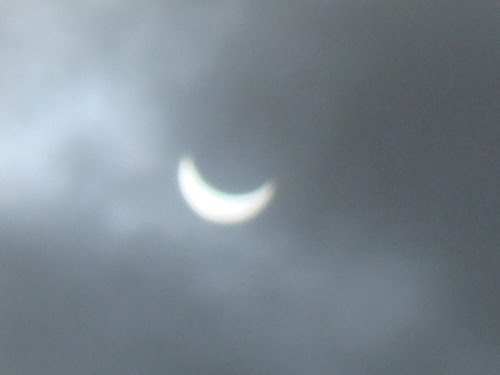 When I was a kid I used to be a bookworm. When I am really absorbed in reading, I become one with the book. On one memorable afternoon, I read four thick books in a row, after borrowing them from the library.

One of my favorite pastimes is to lay myself on the sofa, and keep reading the books, preferably on a lazy summer afternoon. As I am too much occupied nowadays, I cannot indulge myself in this sweet marriage with the imagined and fictional, much to my regret.
Posted by Ken Mogi at 8:16 AM 33 comments:

I went to the performance of "Hansel and Gretel" of Seiji Ozawa Ongakujuku 2009.

The first time I heard live music under Seiji Ozawa's conducting was when I went to a Salome performance with my mother in the suburbs of Tokyo. The music by Richard Strauss was played with fire and full of passion. I became an instant fan.

Ever since, I have been listening to Ozawa when I had a chance. One of the most memorable occasions was when I attended the performance of the Saito Kinen Orchestra conducted by Seiji Ozawa, in the Queen Elizabeth hall. I was studying in Cambridge then, and took the train to the King's Cross railway station in London.

Listening to Hansel and Gretel, I thought about how deprivation nurtured fantasy. Hansel and Gretel are very poor. They cannot get anything other than dry bread. Water is the only drink they come by. When Gretel is fortunate to get some milk from a neighbor, her mother accidentally spills it, breaking the new jar. Angrily. the mother tells Hansel and Gretel to pick up some berries in the forest.

The valley of deprivation is very deep for the boy and girl. Because of that, in a contrast, the dreamlike fantasy of angels that guard Hansel and Gretel's troubled sleep in the night forest becomes shining and rewarding.

Deprivation is the mother of the arts. A great artist can see deprivation even in a situation when there is peace on surface and materialistic abundance everywhere. The artist's soul can identify and then fulfill a spiritual void.
Posted by Ken Mogi at 7:30 AM 9 comments:

In the small house that I rented in Cambridge, there was an old wooden chair. I used to sit on them in the evening, sipping beer and watching the swallow in the sky.

"This chair has a sentimental value for me", said the University Professor who rented me the house. "You see, my father made it for me when I was kid".

There is something about the human brain's ability to comprehend and learn language which is quite extraordinary. It was the first time that I heard the expression "sentimental value" used in this particular context, and the meaning was immediately clear. The term has stayed with me, and the memory sometimes returns to me as if in a flash, the enigmatic moment when I first came across this expression of the English language.

We do sometimes succeed. For example, I remember vividly how when I was about eight I came across a huge tree where literally tens of common bluebottles (Graphium sarpedon) gathered. This particular species is not uncommon, but I have never seen them in such an abundance before or ever afterwards.

It was in the backyard hill of my relative, in my mother's native island of Kyushu. The forest that covered the hill is now lost, turned into a huge housing project.

The fact that the environment which nurtured it would never return adds fuel and sparkling to the sentimental value of this memory. I treasure it like a gemstone of bygone days.
Posted by Ken Mogi at 9:06 AM 2 comments:

Some time ago, I was talking with the curator Yuko Hasegawa. We were discussing the nature of criticism, a necessary element in evaluating works of contemporary art, which is Yuko's field of expertise.

"When I look at a piece and do not like it, I simply move on", Yuko said.

"I walk and look, and keep moving on, saying this is not it. Then, once in a while, I come across a marvelous piece that really shakes my soul. Then I say to myself, here it was."

Yuko's method of criticism in action fits me. Criticism is not about having the last word. It is about living, actively searching, making discoveries, and accepting. 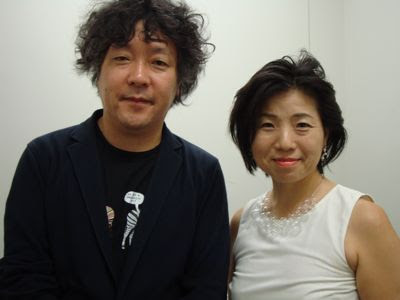 With Yuko Hasegawa
Posted by Ken Mogi at 7:26 AM 5 comments: