Writing the Little Book of IKIGAI.

The Little Book of IKIGAI, due to be published from Quercus on the 7th September 2017, is my first full English language book.

In the past, within the English language domain, I have written book chapters and edited a volume. However, this is the first time I have ever written a book in English from the beginning to the end.

It is not that I am a stranger to the publishing world. I have published more than ~100 books in Japanese.

However, the practical and imagined language barrier has been huge. For someone who was born and educated in Japan, writing a book in the English language de novo has been a dream that I thought would perhaps never become a reality.

Now that I have finished writing the book, with the final proof sent to the publisher, I can look forward to see that impossibility actually happen.

Needless to say, I am extremely happy.

Writing a book in the English language has always been one of my personal ambitions. Like many other things in life, it got postponed for some reason or another, in a series of not-so-creative procrastinations.

The serendipity happened when my literary agent Mr. H made a trip to the London Book Fair. To be precise, Mr. H was not my literary agent at that time, since I did not have a single publication to my name in the English langauge. Mr. H was born in Australia and is now based in Tokyo. We have been discussing book projects over the years, but nothing had materialized, until last year.

During the London Book Fair, Mr. H met with an editor at Quercus, Katy. Katy apparently said she was looking for someone who would write a book on IKIGAI—the Japanese philosophy of life which contributes to good life and longevity. Mr. H immediately thought of me, and sent an e-mail.
To be honest, at that time, writing a book on IKIGAI was not on the top of my "to do list".

Interestingly, there were several interesting coincidences. I already knew the Dan Buettner TED talk in which he mentioned IKIGAI as the secret of longevity in Okinawa, a lovely island in the south of Japan. Just before I got that e-mail from Mr. H, I was attending a TEDx conference in Tokyo, in which one of the audiences (who was apparently an American) mentioned in passing IKIGAI as one of the Japanese ideas that was catching the world's imagination.

So when I received that e-mail from Mr. H, although I had not thought of writing a book on IKIGAI before, I immediately thought it would be an interesting challenge to come up with something that would be not only helpful, but also provide some insights into the Japanese ways of life.

IKIGAI is something that many Japanese take for granted, like the air. In the process of writing the book, I needed to do some soul searching, reflecting on how this particular concept actually formed our daily lives. I also tried to present a concise explanation of science involved in the elucidation of the benefits of IKIGAI.

I did my best to make the book balanced on practical indications and in-depth explorations. I discussed the world of sumo, sushi, Shinto shrines, the usual suspects when discussing the unique values of the Japanese culture, as well as some themes probably new to many Western readers, such as radio calisthenics, comiket (comic market), and cosplay.

I hope this book will be helpful for people who are interested in IKIGAI as a hint for a better life. 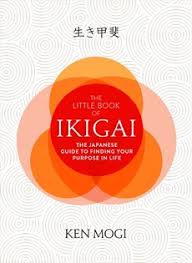