The word "Reiwa" is destined to define and influence the Japanese psyche for decades to come. The new era name, "Reiwa", was announced by the cabinet secretary on the 1st of April, 2019.

The Japanese era names ("nengo", or year name), which officially started in the year 645, have directly or indirectly affected the zeitgeist of the Japanese society.

The Meiji era (1868-1912) witnessed the rapid modernization of Japan. The Taisho era (1912-1926) was marked with the surge of democracy and diverse culture. The Showa era (1926–1989) was shadowed by the Second World War, and then brightened by the rapid development of the Japanese economy in the postwar era.

The current period, the Heisei era (1989-2019) is to officially end on the 30th April 2019, when the current Emperor would abdicate for the first time since 1817.  The Reiwa period would officially start on the 1st of May.

It is too early to predict what the Reiwa era would turn out to be. It is significant that it has been taken for the first time in history from a Japanese classic, Manyoshu ("Collection of Ten Thousand Leaves"), the oldest collection of Japanese poetry. All other Japanese era names, when they could be traced, have been taken from Chinese classics.

Manyoshu is a collection of poems composed by people from all walks of life, from the nameless peasants and  fishermen, to nobles and the Emperor. Reiwa is thus perhaps an apt era name in a modern world where the relations between people are increasingly becoming equal and free. 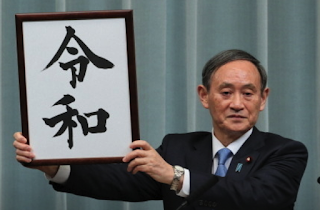