Where comedy approaches in spirit great works of drama

Steve Coogan's character, Alan Partridge, is excellent in that he exposes the ignorance, prejudice, stupidity, and vulnerability in all of us. The good work is being carried on in This Time with Alan Partridge.
When an intelligent comedian (such as Steve Coogan) plays the role of a prejudiced person (such as Alan Partridge), the result is strangely therapeutic. It is perhaps the blessing of metacognition.

In order to depict a mindless moron, one needs to make keen observations in the everyday, seeing how people fall into the pitfalls of mediocrity.

No person is hundred percent vile, nor perfectly good. It is only human to be complacent in one's imperfection. A good comedian captures the human nature and makes a truthful portrait of it. That's where comedy approaches in spirit great works of drama, such as those by William Shakespeare.

The ongoing difficulties concerning Brexit in the U.K. seem to suggest the importance of keeping your judgement implicit.

A referendum might appear to be a straightforward way to make a people's judgement. However, measurement of the people's will is only statistical. Even if we come up with a statistically significant result, there is no guarantee that the people's will would stay the same over time.

This is probably why we have members of parliament, who are elected by the people, engaged in continuing debates over issues. Real people are not numbers. Their opinions change all the time.  Most crucially, their judgements are at least partially based on intuitions which are implicit, not on explicit rules or numbers.

The ongoing Brexit fiasco, which as someone who admires the culture and traditions and above all people of the U.K. greatly hopes would come to a settlement soon, does seem to show the risks involved in putting too much emphasis, a fixed significance in particular, on a specific number supposedly representing the will of the people at a given time.

A lesson in life's fundamental conditions of radical changeability.

It is official. Cherry blossoms are here this year again.

The Japanese craze for cherry blossoms (sakura) is world famous now. The love for the five-petal flower is so deeply embedded in the Japanese psyche that we take it almost for granted, like the air we breathe.

The essence of the cherry blossoms is that they are so ephemeral. The first blooming of the cherry blossoms is always a major news making national headlines, partly because it is so unpredictable. Once they bloom, you cannot tell how long they will last. The whole affair is tinged with subtle and transient signs. You must learn to read and interpret these elusive manifestations of nature.

Unpredictability and ephemerality are the hallmarks of the cherry blossom phenomenon. The blooming and perishing of these lovely flowers is a lesson in life's fundamental conditions of radical changeability, repeated every year. 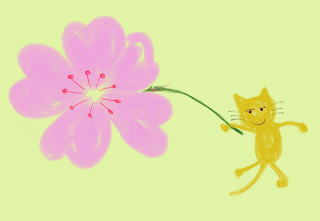