The human bran is attracted to contingencies, the mixture of regular and random things. Contingencies are concerned with the border between the self and non-self. Things about the self are in general predictable, whereas actions and events arising from the non-self are largely unpredictable.

There is, however, an important amendment due to the above statement. The dynamics of the unconscious contain surprises and inconsistencies from the point of view of the conscious mind, as historically demonstrated by Sigmund Freud. One cannot control one's dreams or hidden and often suppressed desires. Thus, due to the existence of those irregular elements, the core of the self is rich in contingencies.

That is why one keeps being attracted to the self. If everything about the self is predictable, it is not very fun any more. The very fact that some part of the "I" is unpredictable makes being the contingent self so interesting.
Posted by Ken Mogi at 8:19 AM 4 comments:

Perception of one's own action

One of the apparent functions of the perception of one's will is to make one's own action predictable by the self. By the cognition of the fact one is about to conduct an action, one is able to prepare oneself for the likely outcomes of that particular action.

For example, if, on a hot summer evening, one wills that he opens a can of beer, he can fairly well predict a series of sensations that follow. The feeling of the tab being pulled away, the sound of micro-bubbles forming in the can, the first taste of the desirable drink on one's lips and tongues, the flowing of the cold liquid down the throat. With appropriate predictions, these sensations can give one a great pleasure, as this writer is very well aware.

Without prediction, however, the same series of sensations can be a source of anxiety and horror. Imagine, without you knowing it, somebody abruptly puts some beer into your mouth. Shock and panic would be your reaction, rather than the harmonious joy that would follow the perceived action of drinking.

As I have repeatedly written in this space, I used to collect and study butterflies quite seriously when I was a kid. It meant that I had to wait for the emergence of these rare species that I was after in the forest and the fields, often for hours, sometimes even for days.

There was a special quality in the time spent waiting for the butterflies. Butterflies could pop into view from any directions in the space around you. Once an interesting butterfly has appeared, you had to react very quickly, as otherwise the species might disappear. The combination of a long wait and a quick response characterized my butterfly time.

The human brain, once it learned something from a particular experience, can apply the resulting circuit to many other things. Today, after having ceased the active chasing of butterflies, I sometimes feel that I am still waiting for rare species. The butterflies have turned into concepts, new ideas, interesting people, beautiful cultural artifacts. The butterfly time in my childhood has fine-tuned my sensitivities for the abruptly emerging things, preparing my body and mind for a quick reaction.
Posted by Ken Mogi at 7:41 AM 4 comments:

Civilizations come in many forms.

I traveled to the Island of Bali in February. On the last evening of my stay, there was a Legong dance show at the hotel.

The stage was set in the darkness of the garden. Two girl dancers floated in the dimly lit platform, moving their feet and hands elegantly to the Gamelan music, oblivious of the ups and downs of the outside world.

At that moment, I was convinced that the dancing girls were at the center of a civilization. Efforts and aesthetics were put into that core, enriching the tradition, bringing growing, glowing, enchanting, fascinating, enlightening things to those who were fortunate enough to be involved.

That vivid sense of the reality of a beautiful civilization never left me, and it is with me today.
Posted by Ken Mogi at 8:45 AM 2 comments:

I have been keeping the Japanese blog more or less regularly since 12 December, 1999. My webpage The Qualia Manifesto was initiated on 26th November, 1998.

I think I have been an experimenter of various media offered by the internet. Of all the different services offered on the web, some stay, and some go out of fashion. For example, for some time I kept issuing the so-called "mail magazine", but have discontinued to do so. I have initiated a mailing list, which is still active, but I can see its difficulties. Social network services somehow have not captured my imagination. There is something about a SNS which is not really creative or practical, and I seem to spend little time accessing them.

So I hear the latest buzzword is "Twitter". I am registered, and following some guys while being followed by some. I do understand the role of Twitter in, for example, recent reporting of events in Iran after the election. I can see that Twitter has a potential of replacing or complementing the traditional journalism. Having said that, Twitter so far has not really worked for me.

I seem to have rather stringent criteria for how I use my brain time on the web, and so far Twitter does not capture my imagination. Maybe I am wrong and am simply not seeing something.

Even in the internet era, it is not that one spends all one's time on the web. We have other things to do. I seem to regard the time connected to the internet as very precious, trying to be "a web athlete", using the "on-time" in the most efficient and rewarding way.
Posted by Ken Mogi at 7:27 AM 6 comments:

I was traveling to Nara, the ancient capital of Japan.

After searching for huge cedar trees in the mountain, I was strolling in the town center with my fellow travelers.

It was dusk. We were looking for a place to rest our tired body and have some nourishment, preferably preceded by a glass of ice-cold beer.

There was a car park, and looking down, I noticed a few weeds growing out of the crevices of pavement.

What a contrast, I thought. The 1500 years old cedar trees we've seen in the mountain, and these small weeds in the corner of the busy street.

Yet, they share the same principles of living. They are hopefuls on this earth. They are green, and thriving, or trying to thrive, as best they could.

Life. They are everywhere. Hope is the unifying theme of all that is living, whether it is the 1500 year old cedar tree in the mountain or the tiny weeds in the car park crack, or we thirsty bears looking for that refreshing glass of drink. 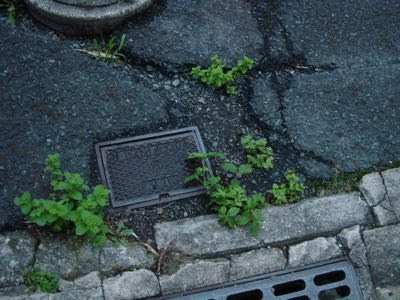 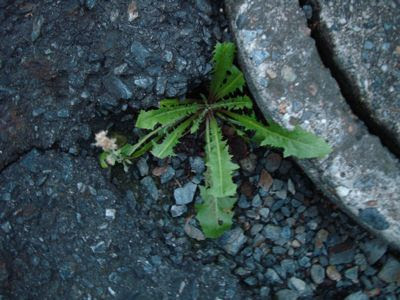 Lamentations of a Mermaid.

"The Lamentations of a Mermaid" (Ningyo no nageki) is a literary bar ("Bundan" bar) in Tokyo. You can meet writers, novelists, editors and other people from the literary circle in the bar.

The name of the bar is taken from the novel by Junichiro Tanizaki. The bar is owned by Ms. Saiko Matsumoto.

Literary bars such as The Lamentations of a Mermaid are Japanese institutions. There are many legends involving famous writers in the literary bars. Literary bars are also practical in that you can have a chance meeting with people who share the same interest, namely writing and editing. Sometimes, projects for a book is struck up in the bar.

The Lamentations of a Mermaid is located near the University of Tokyo. I know the area very well from my student days. There are many second hand bookshops, where they sometimes sell the original hand-written manuscripts of famous writers. 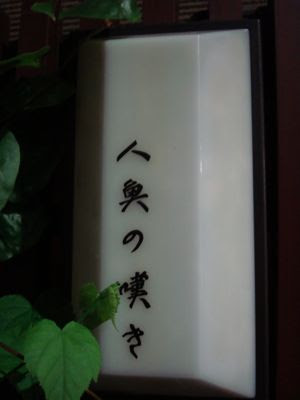 The sign ("The lamentations of a mermaid" written in Japanese) at the door of my favorite literary bar.
Posted by Ken Mogi at 9:14 AM 3 comments: