On Satuday, I went to the Suntory hall in Akasaka, Tokyo to attend President Barack Obama's speech. Mr. Obama was on his two day visit to Japan, as he involved himself in the first part of the Asia visit.
I arrived at the venue at past nine. Katsuhiko Hibino, my artist friend was in the queue. Once seated, I discovered Takeshi Kitano was in the seat front of me.

First there was music. A string quartet played Mozart. Then there was silence. While the audience in the arena waited in great anticipations, the man himself came onto the stage.

That magical moment of transformation. People standing up. Applauding enthusiastically. History being developed and made in your own eyes.

Charisma is an art depending on synthesis and balance. That a nation as large as the United Stages needs a leadership in the form of a human being in the flesh is an interesting fact of the world we live in. Although a human being is not without shortcomings, he or she is irreplaceable by any advanced technologies. We are, each one of us, the dynamo which drive history. Literally. How humble and awesome one feels.

Mr. Obama was as charming as I have always imagined him to be. Slim and warm, with enthusiasm like a teenager, and a soundness of judgment apparent from his demeanours.

The talk was over before I knew it. After s deep sigh, I walked out into a Tokyo which looked different from what I have known.

(This entry is published in advance of the 15th November date, for which it is designated, in view of the value of rapid reporting on current affairs and for the reason I would be on Sunday in a region where an internet connection might be difficult).
Posted by Ken Mogi at 12:44 PM 9 comments:

President Barack Obama is now visiting Japan. According to a news report, he expressed his wish to taste "Kobe beef" during his stay.

It is true that Kobe beef is a delicacy. The Japanese take great care in the preparation of food. I hope President Obama will have an opportunity to make his wishes come true here.

I once visited a steakhouse in Orlando, Florida. The name was "Kobe".
The chef held a knife and fork, and prepared the food in a very entertaining manner. During the procession, he actually made a "Mount Fuji" with sliced onions. Then he put some alcohol into the volcanic "crater" and set fire.

A great fire momentarily came out.

To the best of my knowledge, no steakhouse in Japan makes an onion Mount Fuji and make it erupt. I enjoyed the whole experience, though. Exotic!

When I started to learn English, I was fascinated by the word "dandelions". The Japanese language has a lovely word for this particular flower, namely "tampopo" (which became, by the way, the title for the popular film about noodles by Junzo Itami). The English denomination is alluring in a different way.

It was clear to me from the beginning that the word had something to do with "lions". I imagined that the expression referred to the mane of the male lion, as they are visually similar. Later, I learned that "dandelions" are literally "lion's tooth", where the "tooth" refers to the toothed leaves. Equipped with this knowledge then, I imagined a lion with its jaws wide open, the sharp teeth inside showing the pride of living.

Etymology is fascinating. Meanings are generated from layers of meanings. But then one is aware that the meanings of words are ultimately without reason.

On a field of significance without a bottom sways the yellow heads of dandelions. The sunbeams sprayed on their petals are enchanting messages from the cosmos which is fundamentally absurd.
Posted by Ken Mogi at 8:04 AM 4 comments:

My mother grew up in Kokura, the north capital of the southern island of Kyushu. After she moved to Tokyo to marry my father, she learned that the food situation around Tokyo had been much worse during the war.

"We were never out of something to eat, really," she used to say. "We used to eat an bowlful of kazunoko (herring roe)". In and around Tokyo, kazunoko was considered a delicacy to be consumed at festive times, especially the new year. So there was certainly a geometrical variability in the values of marine foods.

Although the girl that was my mother never really starved, there was one particular thing that she craved for. The apples. My mother's father (my grandfather, who is sadly no longer with us) used to buy one apple for each of the children, once a month on the salary day.

My mother was the eldest child in the family. On the salary day, or rather the apple day for the children, she would take her brothers and sisters to the railway station, where they waited the father's return. Because apples were rare in Kyushu at that time, the children awaited eagerly for this monthly treat.

My mother used to tell this apple story from time to time when I was a child. Although I did not think much of it at that time, now it is fondly remembered, as a story epitomizing the essence of happiness.
Posted by Ken Mogi at 6:47 AM 7 comments:

There are certain things in life that come and go as fads, and yet stand out in one's memory as vivid and significant for years to come.

The secret base play was one of them. When I was about 5, there was a vacant space near my house. Grasses grew there, and logs and metals were stored (or rather abandoned) all over the place.

It was a perfect setting for the "secret base" play.

We brought a few cardboard boxes, and started building the secret base. We imagined that we were preparing to fight an invisible and unidentified enemy. It was fun to prepare the flags and hats of the defense team.

The context was not necessarily one of confrontation, however. There was something fundamentally cozy and intimate about hiding ourselves together in the cardboard box next to each other. The skin touch. The breath. The inexplicable comradeship of us brats.

It may be because these moments of physical and spiritual proximity are rare to come nowadays that I miss the times of secret base so much. 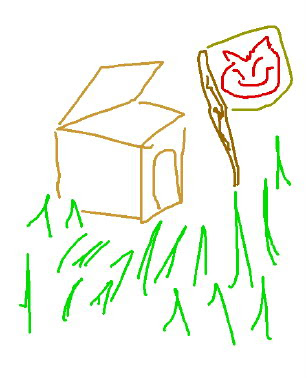 The secret base. Happy childhood times.
Posted by Ken Mogi at 7:47 AM 7 comments:

On the way to Paris, I was chatting with a flight attendant gentleman. When he learned that I was going on to Berlin, he remarked "why, are you not going to Paris?"

I know. Paris is such a romantic city. When you go to Paris, something in you is stirred. There is a new breath in life. And you remember things long forgotten.

On the way back from Berlin, I passed Charles de Gaulle airport again. I saw the "Trains to Paris" sign. Then something in me moved quite strongly.

I went to a wonderful performance of Lohengrin in the Staatsoper here in Berlin. The inszenierung was by Stefan Herheim.
It was a performance difficult to interpret at first. But then things gradually became clear. Lohengrin, the swan knight. The beauty of trusting and then the dark shadows of doubts. Lohengrin does not come from a far-off land of magic and fantasy. He appears and then disappears from the stage ceiling. There is no topological enchantment there. Everything is stripped of the venerable machines of divination, and we are left only with brutal and prosaic facts. Then we have to start from precisely there.

At the end of the third act, the lights on the ceilings came down. And then a huge sign saying "Kinder, schafft Neues!" was hung from above. The message from Richard Wagner himself.

"Kinder, schafft Neues!" "Children, create new things". In order to create, we somehow have to let free from prejudices and
accomplishments. What words of enlightenment and liberation.

When I walked out of the theatre, the night air of Berlin was definitely warmer. And the Kinder were whispering nearby.
Posted by Ken Mogi at 2:50 PM 2 comments:

When I was a kid, I gradually learned that there were all kinds of people in society. Some are bad, but they are so with some reason, and often not without a charm. Everyone is eager to live. That was one of the first lessons in life. And I keep it.

When I was about 10, I was alone at home. The door bell rang. When I opened it, I saw a man dressed in black suit outside.
"Is your mom home?" he said. I said no. "Is your papa home?" he asked. I said no. "Is anybody around?" he continued. I answered again in the negative.

Then his face became suddenly eager, all his attention apparently being concentrated on me.

"You know, son", he started. "I work for a watch company. And the company went bankrupt. I have some very expensive watches with me. They normally retail for tens of thousands yen. But I have to make money somehow. You must have your pocket money, son. Here's a very lucky proposition. For you, it would be just 1000 yen. How about it, son? Would you like to buy it? Your mom and dad will be delighted"

The man showed me a watch. There was a logo on the face. "Longtimes", it said. "This is a very famous brand", the man assured. "You are very lucky to have this watch just for 1000 yen."

At that time, I knew nothing about watch brands. Some years later, I learned that there is a famous brand "Longines". The "Longtimes" watch was clearly a fake. And a very primitive one, too.

Although I did not possess the knowledge, I said "No, thank you." to the man. Kindly, but with a firmness that a 10 year old can command. There was something oily about the man which I mistrusted. Luckily, the man was not insistent. Maybe he thought I did not have the money with me. He shrugged his shoulders and went off. Although the man was apparently a swindler, I did not dislike the person.

To this day, I vividly remember the logo "Longtimes" on the watch. It has been literally "long times" since that childhood day. It is very strange to say so, but sometimes I wish I had bought the watch. Then perhaps I could have commemorated something. The vulnerability of life, the gullibility of the deceiving, and perhaps the pang that must accompany all living on this earth.
Posted by Ken Mogi at 7:39 AM 4 comments: