Right now I am in Hakodate. I gave a lecture at the Future University Hakodate.

The night fell. I was at a Sushi restaurant with my friends. As I strolled onto the street, I saw glaring lights in the distance. At first I was confused. Then I realized that they were on the sea.

"They are Isaribi", my friend said.

A poetic Japanese word for the fishing lights. With these glitters, the fishermen attract squids. We had just enjoyed one in the Sushi restaurant.

For some time, I could not turn my eyes away from the fishing lights. They were like apparitions which did not quite belong to this earth.
Posted by Ken Mogi at 8:25 AM 3 comments:

As a kid I used to collect and study butterflies quite seriously. My butterfly mania was quite famous in the neighborhood and school. One day, when I was eight years old, one of my class mate girls contacted me. Apparently, there were some interesting looking butterfly larvae in the garden of her house, and she was wondering if I wanted to come and have a look.

That was one instance of the many butterfly alerts that I used to get from people around me those days. When at home, I would sometimes get media related butterfly alerts. I had my room on the second floor, and I would be reading books, when my mother yelled "Kenichiro, come, butterfly's on t.v.".

I would rush downstairs, and if I was lucky, would get a glimpse of butterflies on the screen, either in a news or a nature documentary.

When your love is known, people would give you alerts, out of kindness, and you respond with quick moves. Butterfly alerts were highlights of my youthful life. 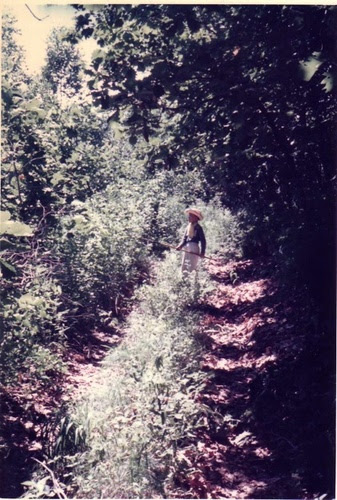 Myself as a kid (10 years old) waiting for the butterfly in the woods, possibly in the northern island of Hokkaido on a butterfly trip.
Posted by Ken Mogi at 7:48 AM 4 comments:

When I strolled in Cambridge U.K. for the first time back in 1993, I was fascinated by the ancient ambience of the academic city. As I approached the Trinity college, I noticed a small writing on the wall.

"To the river", it said, with an arrow pointing towards the river Cam.

I liked the metaphor, and it stayed with me to this day.

In my life, whenever I can, I am looking for a road leading to the river.

"To the river" sign on the wall near Trinity college, Cambridge, U.K.
Posted by Ken Mogi at 9:18 AM 2 comments:

My mother originated from the southern island of Kyushu.
I was about five when my parents took me to the hot spring city of Beppu, a few hours away from my mother's native town.

The city is famous for various kinds of "hells." The hells are actually special kinds of hot springs, which have been turned into fictional realms belonging to another world where earthly sins would be corrected.

My aunts and uncles were with us. Seeing some hells must have fuelled my imagination. I remember vividly how we came to the entrance of a hot spring bath, when my aunt said that it was called a "thousand people bath" (sen-nin-buro), as a thousand people could bathe at the same time.

The word stimulated my mind, which had been made soft and sensitive by the exposure to the hells. I pictured a thousand people in bare skins standing very close to each other, with the white steam encircling them.

I wanted to see it for myself, but I was dragged by the hand and was taken to the station, where we took the train to travel further.

More than 30 years later, I visited the city of Beppu for a brain science conference. I found out where the "thousand people bath" was in the tourist office.

The real "thousand people bath" was a gigantic hot water pool, roofed by a huge glass structure. The sunshine filled the interior, and there were trees and grasses shining in healthy green colors.

It was nice, but very different from what the five year old imagined it to be.

I am still looking for my thousand people bath.
Posted by Ken Mogi at 7:25 AM 1 comment:

I don't know how it is, but I can breathe easily when there are rooms for extreme people.

Extremity is an art, and requires a certain level of intellect. I really enjoy a conversation when there is somebody in the party who has eccentric views on, for example, the second law of thermodynamics, or the collapse of wave function in quantum mechanics.

Most scientists take a mild attitude towards these venerable enigmas, saying that as far as they can calculate things for all practical purposes (FAPP), they don't care. Those conservative people, although they are certainly the main stream in the academics, do not really interest me. Because they don't make the air lighter.

Being an extremist is not easy nowadays, when the society becomes increasingly practical. It is well advised to keep a sensible day job, while you maintain the extremist's activities at night.

It fills me with indescribable joys to think that there are still extremists around.
Posted by Ken Mogi at 9:32 AM 1 comment:

Now I have kept this journal for one month in a row, starting from the 6th of June entry "A double sin". There were two entries prior to that (3rd and 4th of June), but the continuation was broken because I did not make any entries on the 5th.

This year I intend to continue this "blog streak" for quite a long time, unless something inevitable prevents me from doing it. The reason why I am doing this is complex in psychology but simple in the principles.

It is always the principles that count.
Posted by Ken Mogi at 7:11 AM 7 comments:

The paintings by El Greco (1541-1614) always struck me as very original, ever since I glanced upon one in an art museum.

Giorgio Giulio Clovio was an artist freind of El Greco, although much older than him.

-------
Clovio reports visiting El Greco on a summer's day while the artist was still in Rome. El Greco was sitting in a darkened room, because he found the darkness more conducive to thought than the light of the day, which disturbed his "inner light". (quoted from M. Acton, Learning to Look at Paintings, p.82)
--------

The figures depicted in the El Greco paintings appear as if they are shining from within.

The inner light, when it comes from the painter, is the source for great originality.

In order to be unique you need to listen to your inner voice, rather than attend to what is being said and circulated around you.

A pursuer of inner light goes far, freed from the conventions of the day.