Alienation of the familiar

I flew to Paris from Narita. Right now I am in Charles de Gaulle airport, waiting for my plane to Berlin.

On the airplane soon after takeoff, there was an announcement to the effect that Mt. Fuji was visible on the left side. I looked out of the window. The highest mountain in Japan was seen in the far distance, with its peak just above the sea of clouds. What was striking was its metallic appearance. It was as an alien object, not really belonging to this world.

It was not the Mt. Fuji that I used to look at as a kid from the Shinkansen train. It was not the Mt. Fuji in a Hokusai ukiyo-e. The fact that a familiar thing suddenly appeared as something completely unknown left a lasting impression on me, and for the rest of the flight I was thinking of parallels, the alienation of the familiar.

Then I think the universe shivered and coughed, because I began to consider strange ideas like the possibility of a direct conversation with god.
Posted by Ken Mogi at 2:26 AM 3 comments:

When things get too busy and business becomes nasty as usual, I turn to the Ozu treasure trove. There, I find life as a tranquil harmony, where everything is human size. By getting immersed in the motion picture flow, I literally seek the salvation of the soul.

The other day I was watching "An Autumn Afternoon"again, the last film by the great director. To be precise, I did not have time to watch it. I just let the film go while being busy at work, capturing in the subconscious background the flow of lively conversations that is so typical of Ozu's masterpieces.

In it, the old teacher gets drunk again, after complaining how he is lonely in the final years of his life. The two former pupils, who have become company executives, look after the old teacher. The teacher sleeps on the floor, and then suddenly gets up. Forgetting all that has been said already, he looks at one of his former pupils in the eye, and, as if he realized what kind of situation he is in for the first time, says, "you are mister Hirayama, aren't you?" ("Hirayama san ka?"), and sleeps on the floor again.

It is at such a moment of human stupidity and fragility that makes one convinced of the love with which Ozu depicted our earthly lives. It is so poignant that one wants to cry and laugh at the same time. 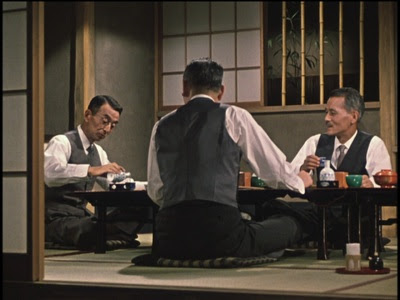 The old boys drinking and discussing the plights of the old teacher. From "An Autumn Afternoon" by Yazujiro Ozu
Posted by Ken Mogi at 6:25 AM 1 comment:

Well before my first love

As a child, I collected and studied the butterflies quite seriously. As a result, I learned to recognize and identify most of the species to be observed in and near Tokyo. Sometimes, it is difficult to tell which species while the insect is in flight. But quite often, it is easy to tell the name of the butterfly while it is airborne.

It is the natural instinct of a boy to look for rare species. When you see an unusual butterfly, your heart started to throb.

Sometimes quite violently, too. You wanted to capture the butterfly with the net, but you might also fail. If the butterfly escapes your net, it could well be that you would never see it again.

The moment you see a desirable one, the drama starts. You are in a suspension whether your wishes are going to be fulfilled.

Thus, I learned the sweet anxiety of waiting for the verdict well before my first love.
Posted by Ken Mogi at 8:05 AM 2 comments:

Admiration of the moon.

I once visited the House of Light by James Turrell in Niigata. It was autumn, and the house was surrounded by susuki (Japanese pampas grass).

Although a work of art, you can stay in the House of Light overnight.

The night fell, and some delicious dishes were brought by the house staff. While my fellow travelers stayed inside chatting over glasses of sake, I wondered out to the large engawa and lay there.
It was full moon. The moonbeam was shining on everything, on the susuki, on me, on the trees. There was a gentle wind. The insects of the autumn were chirping sweet and consoling music.

I suddenly realized that it was a perfect setting for Tsukimi. The admiration of the moon, especially at autumn times, is deeply rooted in Japanese culture. I have been accustomed to such festivities since childhood, but I have never realized that there could be such a harmony of surrounding elements for the observation of the moon.

I also realized, with a pang of realization, that with the modernizations of Japan a perfect setting for moon admiration has become hard to come by. It was almost like a remorse. In Tokyo, and in many urbanized areas, it is no more possible to find a suitable environment for conducting one of the venerable expressions of Japanese aesthetics in appreciation of the lunar blessing.

As I pass through life, the moon seems to be represent things that have been lost, like a symbol of sweet regret.
Posted by Ken Mogi at 8:16 AM 4 comments:

Used to be that when I was a kid, I ate a lot of oranges (mikan).

The Japanese oranges are small in size, and the skins are soft and easily peelable. Used to be that mother would buy lots of them in a box. I would eat 5 or 6 in a row, while being seated in a kotatsu.. The oranges were mainly winter things. I associate the white tranquility of winter times with the sweet sour taste of the oranges.

When I went to Vancouver, Canada at the age of 15, I learned that the Japanese oranges were sold as "TV oranges", as people could eat the oranges while watching the TV. I don't know how widespread this particular expression is. At least Verna told me these were TV oranges.

Learning that my familiar oranges were turned into "TV oranges" conjured a strange feeling for me. It was as if my childhood favorites were being transfigured so that the identity was not recognizable any more.

At that time, I was at a stage of great change myself. Growing up is sometimes like being transformed from a mikan into a TV orange.
Posted by Ken Mogi at 7:12 AM 11 comments:

For mammals like us, mothers play an essential role in life. Before the arrival of civilization, infants could not survive without the milk mothers provide. With the advent of artificial nourishments for the babies, mothers are still indispensable for our existence, especially in the early periods of life.

Thus, it is not surprising that we have developed a wide usage of the metaphor "mother".

For example, the expression "mother nature" has a deep resonance for a human being. Nature provides us with food, gives us protection, and supports our day to day life materially.

The mother nature metaphor is so natural to us that it is deeply unnerving and then ultimately revealing to realize that the universal concept has originated from the very particular condition in which our specific life style is to be kick-started and nurtured. It is an instance of a particular transforming itself to a universal.
Posted by Ken Mogi at 8:49 AM 3 comments:

It is sometimes said that Japanese culture is focused on the concept of emptiness. For example, some statues of worship in the Buddhist tradition in Japan is kept as "Hibutsu" or "Secret Buddha" (The Qualia Journal, 3rd July 2009).

A famous example of secret Buddha in the absolute sense is the "Gohonzon" (main statue of worship) of Zenkoji temple in Nagano. Nobody has seen or dared to see the figure in the recorded history, including the Buddhist priests that jealously guard the reclusive object of worship, which is rumored to be tightly wrapped up with white cloth.

The idea of secret Buddha is said to have been inspired by the Shinto tradition, where it is the norm that the object of worship is not explicitly shown. Sometimes natural landscapes such as a mountain is designated as the object of worship. Thus, the concept of emptiness is deeply rooted in the Japanese tradition.

On the way to a conference in Kagoshima yesterday, I was thinking again about emptiness. Everybody knows that the brain is the seat for mental phenomena. However, if you look into the inside of human brain, you find nothing but an endless network of neurons connected to each other through the synapses, with the glial cells filling the gap. The brain is thus "empty", as far as mental activities are concerned. No light illuminates the enchanted loom, and there is nobody home.

That the essence of mentality is actually emptiness is frightening on the surface but an ultimately reassuring thought. If the truth is to be found in emptiness, then we can access to an infinite source of freedom.

But then that is where our spiritual home is.