My sister and I wandered around in the night, sometimes hand in hand. My mother dragged behind, somewhat breathlessly, as I and my sister were walking fast.

It was quite a while before we could get any signs of fireflies. Suddenly, there was a cry. "Look, there goes the firefly!" We dashed on, but could not really observe the light hindered by the walls of people's backs.

Then a little boy came along, with an insect cage hanging from his hand. Lights could be seen going on and off in it. There were fireflies! "Where did you capture these things?" My mother ventured to ask. "Just there, over in the forest!" The boy's caretaker answered.

"Into the forest!" I cried, and I went off in that direction, with the equally excited sister. We looked around and around, but there were no signs of fireflies. Perhaps the had all gone to bed by now.

But then, as if in a miracle, there, in the grass near a big tree, was a flickering and vibrant light. We found the firefly! We made the encounter at last!

Strangely, by this time, the zeal to capture the insect and take it home was gone. I and sister lingered on to watch the fireflies without bothering to capture them. The night breeze was cool and pleasant. And then, gradually, we made friends with the darkness itself. The fireflies did not matter any more.

In a tranquil mood, we went home and slept.
Posted by Ken Mogi at 9:21 AM 7 comments:

When I was about 10 years old, there was an announcement in the local newspaper that a "firefly night" would be held in a nearby park. Thousands of fireflies would be released in the park for the public to enjoy, the article claimed.

The park, spacious but devoid of any clean running water, was not naturally a habitat of the light-emitting insects. The event was clearly meant to be one-off, with the fireflies brought in from somewhere else, either captivated in the wild or artificially nurtured.

In the contemporary atmosphere ever-conscious of animal welfare and environmental concerns, such an event would raise the eyebrows of many. At that time, however, thirty-something years ago, nobody seemed to have any objections. The fireflies might eventually perish in a foreign environment, but the joy that these insects give, no matter how temporary, was thought to justify the whole fuss (and mess for the insects).

I got all excited to read the article, and asked my mother to take me to the park. We had to ride the train to reach there. I took my small sister, equipped with insect net and cage. When we arrived at the station, there were already lots of kids with eager eyes. They had only one thing in mind. To see a firefly, and, if possible, to capture it to take home.

From the newspaper article, I had a vivid imagination of light points moving here and there in the dark, overwhelming the vision. The reality turned out to be more mundane. Perhaps the numbers were correct. However, averaged over the spaciousness of the designated park, the number of fireflies per unit area turned out to be disappointingly low.

"There are no fireflies," exclaimed my sister. "I would like to go home," she begun to wail. Perhaps the darkness frightened her. I did not want to go home in a hurry, so I kept saying "the fireflies would be in that direction", and continued to move around in the dark forest.

The beauty of butterfly watching

When I go for jogging in the park forest nearby, I am always watching out for butterflies. They are lovely creatures. I used to try to catch them when I was a child, but nowadays I just observe their behavior.

The most interesting feature of behavior to watch is the route that they take. The butterfly flight paths should be in principle chosen carefully for the survival value (i.e., in search of nectar, possible mates, and avoiding predators), and yet are full of rapid turns and apparently whimsical perturbations at the same time.

The beauty of butterfly watching is that you never know when and from where they are coming. Every corner of your vision becomes a potential route of entry for the airborne creature. By waiting for the butterflies, your sensitivities are kept alive and vibrant.

Yesterday, I was lucky to observe a beautiful specimen of Great Mormon (Papilio memnon Linnaeus). This magnificent butterfly used to be more southern bound. Probably due to the effects of global warming, we can now observe Great Mormons in Tokyo, too.

Thus, while jogging among the greens, I can sometimes encounter a messenger from the south.

Every child is born into a system of language.

Every child is born into a system of language. I was born into the universe of Japanese, spoken by 130 million people but virtually confined to the island nation.

English came as a second language. Nowadays I use it constantly in my professional and private lives. As a non-native speaker I still have difficulties handling things.

Fortunately the situations are improving. I feel more and more confident and find tremendous joys in going over national borders and getting connected with people on the globe via the lingua franca. Having said that, the fact that English came to me as a second language has been a source of tremendous hardships in my life.

If only English was my native language. Such wishful thinking sometimes do come to me. On the other hand, there must be some advantages of being born into a minority language. I am yet to find the specific blessing. Maybe the point is too subtle to be made in a short period.

At the least, because of the difficulties experienced, I am set out to do a particular kind of soul searching. Hopefully I stumble upon some valuable truth one day because of this wandering around.
Posted by Ken Mogi at 6:58 AM 11 comments:

Being in a hot air.

So I am back in Tokyo, back into the heat and humidity. When at home, I do not use the air conditioner, as I don't like the artificial atmosphere. The occasional breeze from the window is just fine for me.

Consequently, when I go out, I enjoy the cool air on the train, in the buildings. A tremendous motivation for me to go out!
The reason why I am resistant to heat can probably be sought back to the days when I was chasing butterflies in the field as a child. Butterflies love fine weather, and they roam around when it is hot. I associate good old memories with the state of being in a hot air.

Having said that, today's heat in Tokyo is probably a little bit too much even for me. Good thing that I will be going out soon.
Posted by Ken Mogi at 9:21 AM 4 comments:

On the plane back to Tokyo (JL001), I watched the film "East of Eden". I think I had seen this masterpiece directed by Elia Kazan a few times, in the days of my naive and callow twenties. The memory of the famous theme music, which is very easy to capture and remember, did not need any refreshing. On the other hand, I realized that I had forgotten most of the details of the film synopsis. The lettuce and beans, for example.

The final scene of reconciliation between the father and son was moving because of the subtle chemistry portrayed. The presence of the ever annoying nurse added a strangely effective spice to the whole thing, which might have been otherwise too sweet. The chasm of misunderstandings and miscommunications finally melted like a snowflake touched by the warmth of the human skin.
Before I knew it, tears welled in my eyes. In order to hide my face from the flight attendants, I raised my right arm to the level of my ear, pretending I was stretching my body after a long flight. 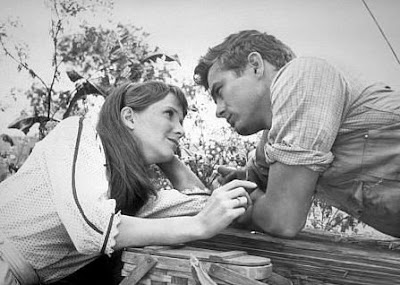 2nd day at the Science Foo camp on the Googleplex. Discussions begin in earnest. The sessions are self-organized, scribed down on large post-its on a large schedule board. I chose to attend the Evolution of beauty, Lightening talks (II), Minds, brains and children, Embracing uncertainty, Aliens and search for life 2.0., Death of old media & the birth of new democracy, and Future of authors sessions.

I met quite a few interesting people. E.g., Jaron Lanier and John Brockman.

I just love the atmosphere of free concepts exchange and jazzy dance together of minds. During the sessions, I always made a point of speaking out. But since the exchange of vocalized opinions are so continuous and never-breaking, my own music of thought needed to be precisely timed and had to be explosive when successfully inserted.
I thank the organizers and participants for the awesomeness of the whole thing.
Posted by Ken Mogi at 11:09 PM 4 comments: