I never thought of Tokyo as a beautiful city. Even the masterful touch of Ozu films such as "Tokyo Story" can barely turn it into a fantasy land of aesthetic joy. I love the city, though, because my life and work are in it, my friends, my beloved ones, and my past, present, and most probably the future. After all, I went to the university in Tokyo, have a bunch of graduate students working with me in the lab, commute a few times a week to the NHK broadcast center in Shibuya to host the "Professionals" chat show, and dine and dream on a daily basis.

When I came back from Kolkata a few weeks ago, I had a refreshing experience. In a nutshell, Tokyo never looked that beautiful. After the scenery I encountered in the Indian city, everything in Tokyo seemed to be glittering and smoothly plastic, a place ever throbbing with water-surface-wavering sensitivities. As I passed by the ANA hotel Tokyo near Roppongi, bound for a lecture and shoot session in T.V. Asahi, I could almost cry for the sheer joy of sensuality that the Tokyo night vision provides. It was a revelation that stayed with me ever since.

I am not saying that Kolkata was dirty compared to Tokyo. I am only stating that Tokyo has its unique features as regards its appearance, especially in reference to the texture of materials that make up the buildings. There's something watery--reflecting the abundant moisture of weather consisting of distinct four seasons--which became very apparent after the exposure to a contrasting climate in India.

I always thought that Tokyo lost its exquisite charm that it used to possess, captured in the great Ukiyoe woodprints in the Edo era. If there is still charm apart from being the "world-capital-of-otaku" in the capital city, I as a resident have got to find it, in the bustling noise of mobile phones and trains that operate on precision. 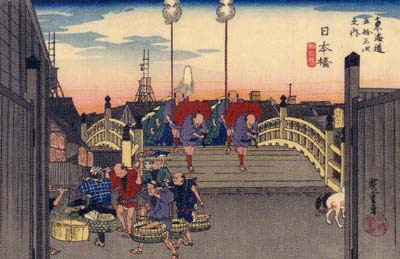 A Ukiyoe woodprint from the Edo era depicting Nihonbashi, or the "Bridge of Japan" in Tokyo.
Posted by Ken Mogi at 11:05 AM 2 comments: