Since coming to Milan for Milano Salone del Mobile a couple of days ago, I have been thinking about design from time to time.

I am aware that people nowadays talk about "sustainable design".

It is certainly a good idea to make a design sustainable, so that too much burden would not be put on the earth's environment, and in order that human resources would develop without fears of distortions or coercions. At the same time, sustainability is a difficult concept to grasp and/or materialize.

Walking through the streets in Milan, I realized afresh that most of the things I saw around me were actually related to design in some sense. After all, every artifact in an urban environment was designed by people at some stage. Some of the things might now be manufactured and installed without thinking too much about the origins, but they were designed by people in the first place, anyway.

The call for more sustainable design comes from the realization that human activities have done much damage to the earth's environment. This is certainly a salient point, but there seem to be some serious theoretical and practical issues.

For example, things in nature, whether biological or otherwise, are mutually entered and eroded, where no definite boundaries are defined. On the other hand, most artificial designs are based on a principle of exclusion. Exclusion is the very foundation of the identity of things designed, manufactured and maintained, and yet is the ultimate reason for the unsustainable feature of artificial designs.

An urban environment, of which Milan is an pristine example, is based on the principle of exclusion. An urban space is composed of concrete, glass, and steel, into which biological entities other than humans are not allowed. Nowadays, people put greens on the walls and roofs, aimed at the ostensible appearance of being environmentally friendly. But at the core, the urban space remains largely and jealously exclusive to any forces of nature which might work towards its corrosion.

I wonder how you can make any design sustainable in essence, without addressing this exclusion issue.

(Maybe I will come back to this issue later) 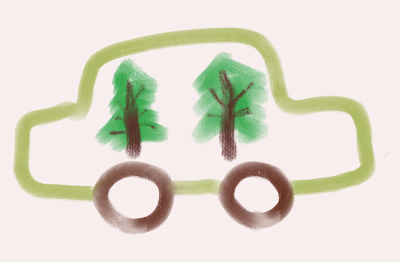 The comparison between Mr. Trump and Mr. Cruz is interesting.
Both candidates make remarks, which are, by today's standards of universal values and human rights, very questionable, to put it mildly.

However, when Mr. Trump makes remarks, for example about walls and immigration, it sounds as if he does not really mean it. It is as if he is just acting like a macho, in the great reality TV show that is the US Presidential election.

On the other hand, when Mr. Cruz says something, it appears as if he is really meaning it. Which is, after all, what earnest Presidential candidates are supposed to do. However, in this case, it makes Mr. Cruz even more scary.

There is another interesting difference between Mr. Trump and Mr. Cruz. When Mr. Trump delivers judgment, he seems to be doing so from his own experiences and value systems. It is an individualistic act. When Mr. Cruz says something, on the other hand, he seems to be referring to supposedly important communal values.

In sum, Mr. Cruz seems to be of a more "deep" case than Mr. Trump, especially because the candidate apparently lacks a metacognition of what he is doing.
Posted by Ken Mogi at 9:03 AM 5 comments: