I found the idea quite interesting. When we see an object, the conscious percept remains basically the same, no matter how often we may observe it. The unconscious cognitive processes associated, however, might be quite variable, corresponding to the heterogeneous multiple processes that makes our cognition robust.

Take the particular example of an apple. The visual image of an apple is basically the same, if we look at a particular apple from a certain angle and under specific lighting conditions. The significance attributed to the apple, however, might be different from time to time, depending on one's mood, memory, feelings, and the context in which the fruit is presented.

The picture emerges that conscious perception corresponds to the invariable in perception, while there is much variability in the related unconscious processes. It is the co-existence and co-dynamics of two processes of distinguished nature that makes human cognition robust and evolvable.
Posted by Ken Mogi at 10:16 AM 2 comments:

I think it was youtube which changed my attitude towards the portable modalities.

Used to be that I listened to the music on the portable audio player a lot, whether it was walkman or iPod. Nowadays, I don't listen to portable music that much.

The fun of listening to music on the youtube in the hotel room when traveling has changed my sensitivities to the portables. When you are walking on the street, or on the train, you are exposed to a lot of noise naturally. Listening to a portal music is done on top of that, which is sometimes OK, but not really perfect.

Listening to music in a hotel room, based on your whimsical moods, has opened a pathway for joy hitherto unknown, and in a sense made the portable music outdated.

Now I am more interested in portable reading. Whether it is the Amazon Kindle or Sony Reader, I think portable text has a great future.

In my life, portable music would keep having a place, but I foresee more importance assigned to portable text, while the music would return to the room and concerts. In that mood, I would be needing less of the earphone.
Posted by Ken Mogi at 7:02 AM 5 comments:

The Wuthering Heights was one of the novels that I read in my teens in English language as I built up my linguistic ability and sensitivities for life in general.

The thing that struck me the most was the revelation of how Heathcliff, after Catherine's death, has been wandering around the Wuthering Heights in search of the loved one's spiritual afterglows. The image of the man walking in the wilderness, seeing the invisible, remained with me vividly, although the details of the novel has now escaped.

It is interesting how a certain type of human nature fascinates one. The respect for someone pursuing something that is beyond the scopes of the everyday has been the persistent trait of my adult life.

That kind of attitude has been nurtured by encountering a novel like the Wuthering Heights, and sharing the feelings and understandings with friends of the same feather.

Precious things are hard to find and keep.

Lawrence Olivier as Heathcriff in Wuthering Heights (1939), with Geraldine Fitzgerald.
Posted by Ken Mogi at 8:58 AM 5 comments:

It seems that something in me has sparked recently. I simply cannot stop reading.

I get on the subway just because I can read in the car. I read Spinoza, Wittgenstein, Schopenhauer, Wagner, Dazai, Natsume, Terada, Penrose, etc. and can never get enough of it.

I remember my past reading spells quite well. When I was 9, scientific fiction novels suddenly captured my imagination. I read all the juvenile novels available in the library. In the senior high school, I learned to read English novels starting from Lucy Maud Montgomery to Jane Austin and Emily Bronte.

I don't know what brought the current reading spree. I could keep reading all day, if it were not for the writings and meetings and lectures and television shootings that necessitate me.

I think there is something in my brain that has now gone over the threshold, and that "something" is telling me to keep reading, infusing me with a never satiable urge.

The reading fever is quite interesting in that it perhaps symbolizes a period of inner transformation, when one is carried by the tides of the unconscious dynamics to hitherto unknown territories of intellects and feelings.

This passion is interesting. I highly recommend people to be infected from time to time.
Posted by Ken Mogi at 8:01 AM 7 comments:

The entry "My mother and Hibari" marked 200 consecutive days of continuous entries, the writing streak starting on the 6th of June 2009.

I look back on my own perseverance with a feeling of humble satisfaction and resolve to keep the streak as long as the circumstances allow.
Posted by Ken Mogi at 2:20 AM 4 comments:

My mother and Hibari.

Hibari Misora is a legendary Japanese singer, sadly no longer with us. Hibari had a concert in the Tokyo Dome once, shortly before she passed away.

The thing is that my mother is a great fan of Hibari, and was lucky enough to go to the Tokyo Dome concert.

Yesterday, passing a Tokyo street, I happened to hear Hibari's voice, singing "Kawa no Nagare No Youni" ("Like the flow of a river"), and immediately remembered how my mother was enthusiastic about Hibari Misora and was overjoyed to be able to attend the concert. At that time, of course, mother did not know Hibari was to pass away so soon.

When I remembered the Hibari concert episode, I felt tremendously happy for my mother, who is up and well at the mature age of 75. 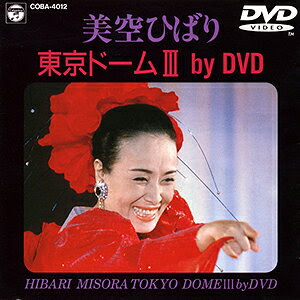 Hibari Misora singing at the now legendary 1988 concert.
(From a DVD cover)
Posted by Ken Mogi at 7:11 AM 4 comments:

I know a university is a good thing. You meet your mentor, friends, and colleagues. It nurtures human knowledge, and updates and creates concepts for future generations.

On the other hand, a university is an institution. It harbors its members, while rejecting others. I know people whose lives have been crushed because they could not enter the universities they wished. There are the pompous and self-important types who just pride themselves on being or having been a member of a particular university. Since any institution has its elements of malice, and since we are living in the internet era, let's do what we can to promote the goodies and discourage the vices.

Imagine no universities. On the internet, you can access to endless sources of academic information. Do we really still need institutions whose members are limited, due to physical constraints, which have no significance in the internet era? Why don't we tell the kids that they can explore the universe of knowledge without necessarily belonging to a particular institution? Why don't we encourage the crushed people that they don't have to feel inferior because of some stupid entrance exams taken at the age of 18?

Why don't we say loud that knowledge is open, for everyone, for someone from the street, as well as for those in the "ivory tower"?

You just need to know how.

Here it is getting colder and colder. In a metropolis like Tokyo, the time you spend inside is considerable. As a consequence, I don't wear a coat, even in the middle of winter. I don't like the feeling of being "suffocated" by heat as one enters a building, subway, or a taxi with one's coat on. I would rather bear the biting wind as I walk for a few minutes on the Tokyo street, in order to spend the indoors in comfort.

Things were quite different when I traveled to Germany in January. It was very cold. Actually, I later learned that Europe was experiencing an unusual freeze spell at that time, with the temperature reaching 20 below zero Celcius.

Here's a picture I took in Weimar, as we were walking on the street one late morning in that beautiful city. The sky was clear,
and the sun was out. Even so, the thermometer read eight below.

On the night of arrival in Weimar, I think it was 15 below or something. When it is cold as that, I discovered that your nostril
hairs would freeze.

"Paki paki". That is the Japanese expression for something that gets frozen and stiff. I remember quite well how my nostril hairs went "paki paki" as I walked through the Weimar night. Actually, that was not an unpleasant sensation.

Even a cold-stupid person as I had to wear a coat then. One could not simply survive otherwise. It seems that I have a high (or rather, a low) threshold for coat wearing, and in Weimar that threshold was reached. 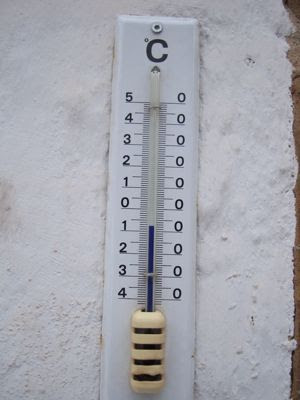 The thermometer reading eight below, in Weimar, January 2009.
Posted by Ken Mogi at 9:51 AM 1 comment: