In order to explore the vast universe of ramen noodles, I need to have more exposure time

I have several weaknesses in life. One of them is that when I eat ramen noodles, I invariably go for the miso flavor.

I know there are other flavors, such as salt, soy, and tonkotsu. If I had ramen three times a day, I would probably have a fairly balanced diet in terms of the ramen flavors, as I can start with the "secure base" of the miso flavor. As it happens, I cannot have that much bowls of ramen noodles. I am always in a state in which I am hungry for ramen noodles.

When I walk along the streets of Tokyo, I am incessantly on the lookout for ramen noodles. Most of the time I do not make it, as I am too busy or am otherwise occupied or engaged.

So when I finally have a chance to sit down at a ramen restaurant counter, I have a strong urge to choose my very favorite favorite flavor, miso, and satisfy my urge.

In order to explore the vast universe of ramen noodles, I need to have more exposure time.
Posted by Ken Mogi at 11:45 AM 4 comments:

During my stay in Vancouver, I went to the Langara college to take English lessons. I used to take the bus, and would ask for "transfers". "Transfer, please" was the first daily colloquial expression that I learned by heart. I remember quite well the strange sweetness of time passage as I waited for the bust to come. The buses were numbered, and I had to take a certain number. When a bus approached with a number that I was waiting for, my breast throbbed with relief.

These were the days when I had to form a sentence before I started to speak, or, when I tried to do it on the spot, the words came out of my mouth only reluctantly and in a clumsy manner. I enjoyed speaking (or rather, to be more precise, trying to speak) in English, all the same.

On the latest visit to Vancouver several years ago, I went to Langara college, to meet myself in the past. The buildings and the campus greens had such a resonance in my heart, until I remembered in a vivid image the linguistically impoverished fifteen years old me walking around with paper bag lunch. 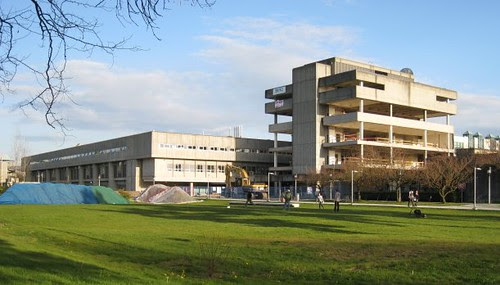 The Langara college campus.
Posted by Ken Mogi at 7:10 AM 7 comments:

There was something definitely primitive in literally eating "from hand to mouth".

One of the things that I really enjoyed doing in British Columbia was blueberry picking.

Verna took me to the Richmond Nature Park, which was about 10 minutes drive from 7580 Railway Avenue. The Park was a vast extension of shrubs and larger trees, and you could pick up blueberries. Taking the tiny fruits from the boughs and eating them straight away was an incredibly rewarding and enjoyable experience.

Verna explained to me that people were allowed to eat as much blueberries as they liked. Only don't bring bottles, Verna said. You were not allowed to take blueberries back home, to make jam, etc. I thought the regulation was fair enough.

There was something definitely primitive in literally eating "from hand to mouth". There were times in the history of human kind when the wild meant abundance, and the blueberry picking brought back those ancient times.
Posted by Ken Mogi at 7:24 AM 5 comments:

In a flash, I realized how stupid I had been.

When I was roaming in Vancouver at the age of 15, my mind was filled with all these strange ideas.

I was originally drawn to Canada by the "Anne series" written by Lucy Maud Montgomery. Consequently, I was on the look out for anything related to Anne, no matter how faint and irrelevant the connection might be.

There was a shopping center at Oakridge, and once I wandered into it. There, I happened to notice that a store attendant lady was wearing a nametag of "Ann". I think that was the fish shop.

"Oh, your name is Ann", I said. The lady, noticing that I was apparently a young boy from a foreign country and having no idea what I was up to, just answered "Yes", and smiled.

At that moment, I think, something extraordinary happened. I was no longer living in a fantasy land, and was being exposed to the reality of the everyday life. I felt the living throb of the new world through the lady. In a flash, I realized how stupid I had been. The mundane scene of a shopping center appeared to glow in a newly recognized brilliance.

Equations for happiness could be simplified

After my initial sojourn in Canada, I repeated the visit several times, and learned to love British Columbia and the surrounding areas.

Life styles are different from country to country. One of the things that I really liked in Canada was the habit of picnic. It was also a very simple and unassuming matter. You simply brought some buns, hamburgers and vegetables. You flame the burgers out in the open, and make a sandwich. The vegetables are put into the dip and eaten straight away. No fuss, no lengthy preparations,
just taking it easy.

I learned from these outings in the parks that equations for happiness could be simplified, uncovering the trembling of the inner self open to the larger world.

And then the sunshine laughs.
Posted by Ken Mogi at 6:52 AM 3 comments:

I would like to embrace the clumsy in me, in everybody.

When your English is still clumsy, and you have a small vocabulary, you have a hard time among the native speakers. The most trying is when you are the single foreigner among the patriots. Worse still, in the English speaking world of the Americas people tend to assume that you are a speaker of their language as a default, regardless of your ethnic origin.

The most difficult task is to carry the conversation in a home party, where nobody pays an extra attention to the fact that you're from a country where English is not the first language. Then you develop a set of skills designed to make life comfortable for you and people around.

For example, you develop a skill in which you divert people's attention and direct the conversation with a short sentence.
It is rather like the technique described by Kurt Vonnegut in his essay "A man without a country." I quote:

As I kid I was the youngest member of my family, and the youngest child in any family is always a jokemaker, because a joke is the only way he can enter into an adult conversation. My sister was five years older than I was, my brother was nine years older than I was, and my parents were both talkers. So at the dinner table when I was very young, I was boring to all those other people. They did not want to hear about the dumb childish news of my days. They wanted to talk about really important stuff that happened in high school or maybe in college or at work. So the only way I could get into a conversation was to say something funny. I think I must have done it accidentally at first, just accidentally made a pun that stopped the conversation, something of that sort. And then I found out that a joke was a way to break into an adult conversation.

Kurt Vonnegut, "A man without a country."

When I was in Vancouver in the summer as I was 15, I tried to get into people's conversation with short jokes or "pointers" that make people take attention and smile. When I look back on my desperate efforts I would like to embrace the clumsy in me, in everybody.
Posted by Ken Mogi at 6:58 AM 6 comments:

t was the summer of 1978. I was a freshman at the senior high, and I was being bombarded by Trevor and Randy with English every day.

I sometimes suspect that being exposed to the unrestrained and spontaneous way kids speak might be a necessary process for one's language to mature. When you start learning a foreign language in the restrained and orderly manner typical to an adult, the music of language might remain stagnant.

It then befell on me somehow to cope with the free and dynamic conversation style of Trevor and Randy. After some while, I invented some strategies to counter the dynamo, and make the conversation flow.

"I'll beat you up, heat you up, and eat you up!" Trevor and Randy, especially Trevor, got a kick out of my clumsy invention and started to imitate me.
Posted by Ken Mogi at 7:33 AM 7 comments: