SFN 2004 -- A Disneyland for Neuroscientists

The Society for Neuroscience Meeting 2004 in San Diego was again a Disneyland for neuroscientists. There were well more than ten thousand participants. The convention center was full of people migrating from talk to talk, poster to poster, their identity feebly accessible through the name tag on the necklaces, except in these Poisson distribution following cases when somebody happened to be one of your acquaintances.
I awaited eagerly the talk by Wolfram Schultz. In the last few years, his works on dopamine neurons have been increasingly inspiring, in that they address the hitherto unaddressed problems of how to handle uncertainty in a robust way (sometimes branded with the new term "neuroeconomics"). I enjoyed his talk hugely, not the less so as I discovered that his idea of a typical reward for the human brain was a bottle of beer. Wolfram now resides in University of Cambridge, U.K., but is originally from Germany, a country known for the passion of good cold beers.
The Disneyland metaphor that I mentioned above is not a trivial one. Even for a prominent senior scientist like Wolfram Schultz, it is almost impossible to be known to everybody. So everyone remain largely anonymous in the mobbing crowd, with some people preoccupied with a cure for Alzheimer's disease, some with the enigma of the prefrontal function, and yet some with brain machine interface. Nobody is given an ostensibly VIP treatment, lining up at the registration desk, queuing to get a cup of Starbucks. The Disneyland metaphor is also a testimony of the status quo of neuroscience as an increasingly big and fragmented endeavor, with nobody really knowing what is going on in the whole field. 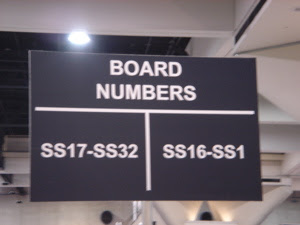 Where's your poster? The poster board number extends from A to Z, and then from AA to ZZ+something, in order to accommodate the several hundred presentations given in each session.

Right now I am in San Diego for the Society for Neuroscience meeting. We are presenting the following works this year.

http://www.qualia-manifesto.com/sfn2004mogilab.html
Posted by Ken Mogi at 5:34 AM No comments: