At the Imperial Hotel

I gave a talk at the Imperial Hotel, Tokyo. The hotel is preparing itself for its 120th anniversary. I was invited to speak on serendipity, which has been chosen as the ethos word for the special occasion by the president of the hotel, Mr. Tetsuya Kobayashi. After the talk, I had a lively dialogue with Mr. Kobayashi on the nature of making most of the chance meetings we have during the course of our life.

Mr. Kenichiro Tanaka, the chief chef of the hotel, prepared a special dinner for us. Mr. Tanaka has been a guest on The Professionals program that I host, so that I am familiar with his warm ways of communicating with people. It was a pleasant evening.

The Imperial Hotel is a national institution. Initially organized as a Western style hotel to welcome foreigners to Tokyo after the opening of the country to the outside world after the Meiji Restoration, it represents the finest in the tradition of deep-running hospitality. Although on the surface it is very western, in spirit the finesse remains uniquely Japanese.

This particular blog is in part an experimentation on expressing the world view and sensitivities of someone who was born and brought up in Tokyo, in the lingua franca that is English. In a sense, I feel the Imperial Hotel is trying to do the same thing. 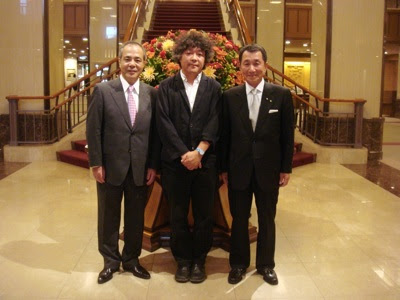 At the Imperial Hotel main entrance. With president of the hotel Mr. Tetsuya Kobayashi and the chief chef Mr. Kenichiro Tanaka.
Posted by Ken Mogi at 6:37 AM