I don't like wearing a coat even in the middle of winter, as I dislike the feeling of suffocation as one enters the indoors.

Consequently, I opt to wear a T-shirt, and then only a sweater, which is full of small "holes" by their nature through which bitter winds would inevitably blow.

When I went to Hakata the other day, it was snowing and the temperature was very low. As I ventured out of the hotel to have supper, the bitter wind was blowing through my sweater onto my bare arms with an astonishing force. It was at then that I felt a "danger" for my life.

Undaunted, I just hurried on to the restaurant, with my arms gathered around the chest area to protect and shield.

Once I was in the restaurant, I was OK.

Unrepentantly, I go about in the winter Tokyo today with my T-shirt and the sweater. People are astonished to see me without a coat. It can certainly make you alert, reacting to the changing weather. And it is just great once you are inside, without the nuisance of having to get rid of the coat.

It is just the winter of Tokyo that I have to withstand, which is relatively mild compared to, say, one in Russia.
Posted by Ken Mogi at 7:36 AM 3 comments:

Out in the Open.

Google's recent decision and moves as regards their operation is laudable. I here pledge my fullest support.
The online manifesto by Jonathan Rosenberg, Senior Vice President of Google, "The meaning of open" spells out important ethics and philosophies for how to proceed with this important medium, the internet.

At issue is the competition between an open system and a closed system. When open and closed system co-exist, sometimes the closed system might seem to have an edge in the short run, as they are more efficient in the limited context.

In the contingent universe, we must all be aware that it is impossible to control an organic and dynamical system, after all. The very idea of controlling information to the liking of the regime is childish and is bound to fail.

By putting oneself out in the open, one's spirit gets the freedom to grow out of proportions. Only then we can do justice to this precious thing, life.
Posted by Ken Mogi at 5:58 AM 3 comments:

Until I reached an intimidating speed

I am in Hakata now. My mother was originally from this region.

When I was a kid mother used to take me to the Kyushu Island. Summers in Kyushu had a profound effect on the buildup of my personality. The dialect, distinct and powerful, was a joy to hear and tickling to imitate.

When I look back on those trips on Shinkansen trains, which typically took hours, the transition itself was a joy, and I long for the breath of fresh air they brought.

Nowadays, it is less than two hours on the airplane, and the sense of transition has diminished.

Walking on the Hakata streets at night, I unconsciously looked for signs of change, both internal and external, and shuddered at the absence of the drastic. I needed to run, until I reached an intimidating speed. I've got it here inside still, the wind tells me.
Posted by Ken Mogi at 7:52 AM 5 comments:

The strange destiny of the Love Theme

It is quite fascinating how a particular piece of culture is accepted on a foreign soil. The Japanese have never understood, for example, how and why the Sukiyaki Song was so well received in the United States, compared to many other popular songs of the days.

The opposite is true, of course. The Japanese have embraced lots of foreign influences, in our own particular way.

The film "Godfather" was released in Japan when I was 10. Although many motifs of the film was beyond my comprehension at that age, the theme tune of the film Godfather ("Speak Softly Love (Love Theme from The Godfather)") struck a cord within me as a child. The powerful melody somehow sound similar to Japanese "Enka" songs, very emotional and full of life.

Somehow, the image of the motorcycle gangsters dashing through the night streets, with the fanfare of the Love Theme played repeatedly, has entered the popular culture of this nation.

When I think of the strange destiny of the Love Theme thus played out, I cannot help but marvel at the rich and subtle way cultures on the planet are mutually connected and evolve as a organic whole.
Posted by Ken Mogi at 7:17 AM 2 comments:

Now out in the world

Mystery is generated and deepens when you can experience something at a particular place and time only. Misere, composed by Gregorio Allegri, was one beautiful example. It was only to be heard in the Vatican, at certain special occasions. The copying of the score was forbidden, with the understanding that those violating the embargo will be punished with excommunication.

Then, the young Mozart came along. He was 14. Listening to the Misere in the Sistine Chapel, he later wrote out the entire score from memory. As everybody now knows, Mozart's memories were extraordinary. Mozart had only to make minor corrections on a second visit to the Chapel. It would have been impossible for anybody else to accomplish this feat.

Through the genius of Mozart, the mysterious music of the Vatican was now out in the world. The Pope, after Mozart was summoned to Rome for investigation, praised his musical genius, instead of excommunicating the charming fellow.

Pondering the significance of this famous episode, I wonder if all creative genius is not like it. Bringing to the world a marvelous gem hidden jealously in some obscure corner of the world, only to be experienced by those who were fortunate enough to be in that location by chance. Genius is about highly strung sensitivities and prodigious memories. 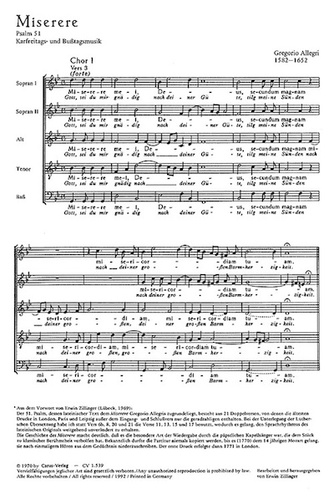 Misere of Gregorio Allegri. Made open by the service of Mozart.
Posted by Ken Mogi at 8:00 AM 2 comments:

As is materialized on his belly front

My best philosopher friend Ken Shiotani is rather big, weighing 120kg according to his recent report. In this slim overconscious civilization, you might think that his belly is rather embarassing to exhibit and see. Actually, quite the opposite is true.

People love to watch Shiotani's belly. What is more, people like to touch it.

When we are chatting in a Tokyo restaurant, as I am a very good friend of his, I can poke Shiotani's belly at any time, in a casual manner. It is rather nice, the rubbery feeling. Shiotani also doesn't seem to mind as he is used to my doing that from student days.

When people observe me doing it, they would like to do the same, and eventually do so, with invariably satisfying results.

Apart from the issue of being politically correct, I strongly suspect that there is something about fat bellies that make people around happy. While naturally concerned about my best friend's health, I respect his way of living, as is materialized on his belly front as well as in his philosophy of time, and doubt, for one, the body fascism that seems to be so rampant today. 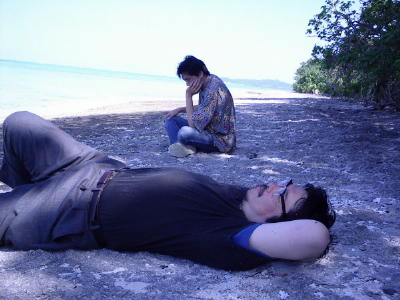 Ken Shiotani seen in the front.
In the back you see my another soul friend Takashi Ikegami.
This was on Taketomi island.
Posted by Ken Mogi at 8:55 AM 4 comments:

My body is stoutly built, and my legs are not that long. Therefore, I am not a good one for dancing in the style of ballet.
However, I quite like watching other people dance. Once I went to see Jo Kanamori dance. It was a wonderful performance.

Jo Kanamori leads the dance company Noism. I went to see a Noism performance in their host town of Niigata. I was so inspired by their dancing, that when I returned to my hotel room I began strange dancing.

I tried to imitate what I have seen, but of course my bodily movements fell short. In addition, my dance might have been less of a comic performance compared to the immortal silly walk. Conclusion: Mine was a physical activity without any meaningful purpose.

Undaunted, I keep doing the strange dancing from time to time. Nothing to show. Nobody to see. Just me and the air around me which receives the strange vibe.
Posted by Ken Mogi at 8:30 AM 4 comments: