The emergence of a new contagious disease makes one ponder on his own mortality.
Humans today tend to think that they are to live "forever", until old age takes its toll in the yet unforeseen future. Life, in reality, could be terminated by an unexpected incident at anytime, by contracting a new type of influenza, for example. We are gracefully oblivious of the brutal contingencies of life, protected by a false belief in the infallibility of the modern civilization.
One can draw the true radiance of vitality from within oneself only by confronting life's contingencies in the face. What the average man needs is a lesson on mortality, rather than on mortgage.
I traveled to Eisenach, Germany in January this year. In a church associated with Johann Sebastian Bach, I noticed on the wall a series of names marked by years and symbols. There were two types of symbols. One was a cross, and the other was a star. I then learned from a local gentleman that the star denotes the birth, and the cross denotes the death, of a person. What a poignant way to express the trace of an individual's life, I thought.
Johann Sebastian Bach composed many wonderful pieces. The cause of his death was the complications after a series of eye operations by an English surgeon. The bright star of music fell. All his wonderful creations could not save him from this untimely death.
Even the stars in the universe have their own life expectancies, the nuclear fuel within their systems drying up after billions of years. It's no wonder that fragile organisms composed of compounds fall. It is only natural that men are mortal.
If our days on this earth are limited, let us at least let them shine. The source of the radiance of our existence can only come from embracing the contingencies of life. 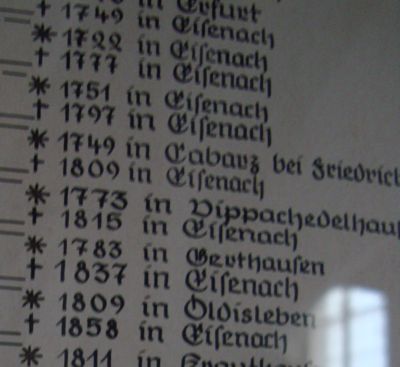 Notice of the birth and death years of church Kantors in Eisenach.
Posted by Ken Mogi at 8:39 AM 2 comments: