One of the cute and poignant things I encountered during my recent stay in Hong Kong was the Yuen Po Street Bird Garden. There you could take a look and (if you would like) purchase a variety of birds. Those animals of flight were exhibiting their gaiety in the cages hung from the roof, or, the case may be, piled up on the pavement. I was particularly interested in birds which looked like a magpie. These birds pass the mirror self recognition test. It would be fun to observe their behavior as they learn to make use of the visual reflections.

Observation is an art open to anybody, but takes many years to develop and refine. One old gentleman admiring the birds stands in a particular vividness in my memory.

He seemed to be an epitome of the mastery of admiration. 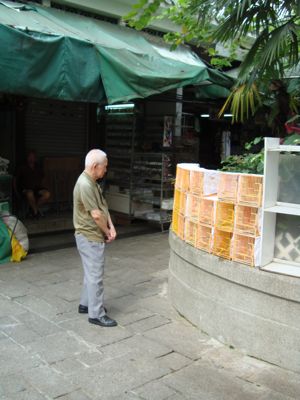 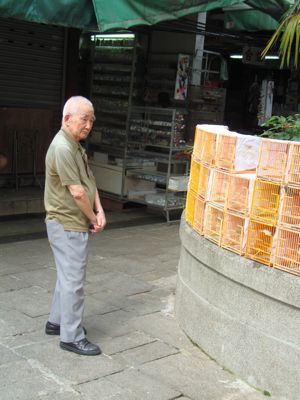 A word of wisdom.

Because human hearts are weak, there is a tendency to take the status quo for granted. But history tells us that what appear to be the opposition today is acually tomorrow's standard and establishment.

The question is, with which you identify yourself today, the opposition or the government. I am one who always thinks that it is more fun to identify with the opposition, not only in politics but in scientific and cultural domains as well.
Posted by Ken Mogi at 7:04 AM 2 comments:

There are eight tracks. I am going to chair the "Social Construction of the Self" session.


Social Construction of the Self
Track Chair: Ken MOGI
The self is a phenomenologically salient and functionally important aspect of human cognition. The discovery of the mirror neurons (i.e., cells in the prefrontal cortex representing actions of the self and others) has added a new and important dimension to the empirical investigation into this fundamental aspect of existence. Findings in cognitive neuroscience have revealed how the self is constructed through the interaction with others. The self is a socially constructed, embodied phenomenon. Various aspects of cognition, e.g., active vision, sensori-motor coordination, perception of time, body image, emotion, and memory, make sense only in reference to the self. Here experts from neuroscience, philosophy, artificial life, physics and other fields discuss the newly emerging science of the self. The session will be empirically based while trying to be theoretically enterprising at the same time.

When I was a kid, I used to imagine that it is always sunset somewhere on earth. Actually, as the earth rotates on its axis, the relation to the sun is always the same in essence. It is only that different parts of the globe are illuminated, and the bright and dark pattern moves on its surface.

There is a translational invariance in the time of the earth. Bound to Tokyo, I think that it is day, then twilight, and then night. But from the earth's point of view, it is always the same earth time.

When it comes to lives on earth, there is also a translational invariance. At any moment, somebody is being born. A loved one is passing away. Others are in the prime of juvenile joy. Some are feeling the decline. Although the points in the time of life is different for each one of us, taken on the earth scale as a whole, there is always and will ever be just one life time.

At any given moment, it is always sunset for the life of somebody among us.
Posted by Ken Mogi at 6:50 AM 1 comment:

Findings in the cognitive neurosciences suggest that the orbitofrontal cortex, along with other loci, is involved in regret.

Regret invokes a often dramatic change of your world view. The fact that you have chosen A instead of B reflects the value system that you had at that moment. By regretting, you repent and try to modify, if you can, the frame of cognition and the set of biases and prejudices that led to the regrettable choice, ultimately constituting the person that is you. This reconfiguring of personality is often painful, but is worth every agony in the long run.

Humans too often ignore incidents of failure, trying to forget what have happened. While oblivion is sometimes certainly beneficial, there is a silver lining to every cloud of regret, however thick it is.
Posted by Ken Mogi at 7:33 AM 6 comments:

Richard Feynman, in his Nobel Lecture , tells us of a telephone conversation with another great physicist, John Wheeler.

-----------
As a by-product of this same view, I received a telephone call one day at the graduate college at Princeton from Professor Wheeler, in which he said, "Feynman, I know why all electrons have the same charge and the same mass" "Why?" "Because, they are all the same electron!" And, then he explained on the telephone, "suppose that the world lines which we were ordinarily considering before in time and space - instead of only going up in time were a tremendous knot, and then, when we cut through the knot, by the plane corresponding to a fixed time, we would see many, many world lines and that would represent many electrons, except for one thing. If in one section this is an ordinary electron world line, in the section in which it reversed itself and is coming back from the future we have the wrong sign to the proper time - to the proper four velocities - and that's equivalent to changing the sign of the charge, and, therefore, that part of a path would act like a positron."

The catch is, as Feynman says, that then there would have to be exactly the same number of positrons as electrons. Actually, the universe as we know it is composed mainly of matters, an asymmetry which has not been properly accounted for yet. Despite this catch, Wheeler's single electron universe is a fascinating idea.

Talking of the mind-brain problem, it appears that despite the superficial differences, we all have basically the same form of consciousness. In that sense, there is only one consciousness, like there appears to be only one electron.

Maybe we can conceive a single consciousness traveling in a zigzag manner like Wheeler's single electron in the space-time. Then, of course, we should have an anticonsciousness, whatever it may be.

On 3rd January 2007, I posted in this journal an essay titled "Managing insanity in a proper way". Therein I quoted Ken Shiotani, my philosopher friend. I reproduce his words of wisdom here.

------------
Another Shiotani quote stayed with me. I think it was one of these days when I was wont to hang out with him in Tokyo bars and Izakayas. After speaking wishfully of his friends who was "climbing the ladders" smoothly and becoming authors and associate professors, Shiotani sighed and said thus.

"I don't want to be a star myself. I would rather like to be the dark void in which all these constellations shine".

Coming back from Hong Kong to Tokyo on the airplane, I thought that one could certainly imagine that one was the dark void in which the stars shone. Imagining the self as "voidness" makes one feel so eerie, lonely, transparent, isolated, omnipotent, permeating, and yet so intimate. I think it was this touch of intimacy which struck me most when I first heard Ken Shiotani mention the phrase.
We all need to have an element of the void sensu Shiotani in our heart, in order to remain a decent human being. We should never be dazzled by the stars alone.
Posted by Ken Mogi at 6:37 AM No comments:

I am in Hong Kong now, attending a conference on the science of consciousness. In the morning, I gave a talk in the auditorium of the Hong Kong Polytechnic University.
I started my talk with a discussion on immediacy. The slide on this theme read thus.

The phenomenological contents of a subject at a particular specious moment is determined by, and only by, the properties of physical properties of the subject’s brain at that moment
----------

----------
Response selectivity is established in essence as a statistical property.
The selectivity to a bar of certain orientation can be empirically established only by the exposure to and comparison with the activities invoked by bars of different orientations.
Such a statistical property is not immediately available for the subject at a particular psychological moment, and cannot constitute the immediate cause of the phenomenological experience.
--------

Our consciousness is always enshrined in the immediate now, and yet, we can reflect on the past, dream about the future. Immediacy also applies to space. We are constrained by the spatially immediate. And yet, we can conceive of things distant and non-existent.
Perhaps it is because we are ever prisoned in the immediate that we developed phenomenological state of minds such as intentionality. 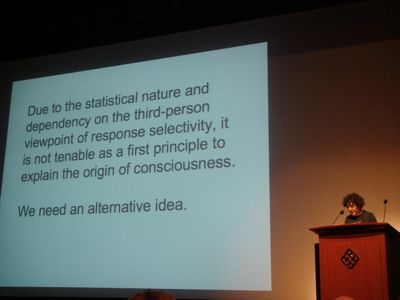