School under the pine tree

It was Thursday, 24th March 2011, the 12th day after the earthquake. Early in the morning, I headed toward the Haneda airport, which Tokyo residents use for mostly domestic flights. For the first time after the earthquake, I was to leave Tokyo. I had not been out of Tokyo since the 7th, when I returned from a trip to Hakata, Kyushu. Prior to that, I had been to the United States, attending the TED conference at Long Beach.

I am normally a restless fellow. The 17 days stay time in Tokyo was unusually long. After the quake hit Tokyo, two business trips had been cancelled; one to Kyoto, and one to a hot spring near Sendai. Actually, Sendai was within the most severely damaged area. Had either my trip or the earthquake been a few days off, it was possible that I might have been affected by the worst quake in Japan's postwar history. I could have been unable to move and breathe amongst the calamities.

As I approached the airport terminal, something seemed to start circulating within my system; something that I had long forgotten. I met my editor and photographer in front of the check-in counter. "Hey, I'm glad to see you well. Where were you when the earthquake hit??" We greeted each other with what had become the virtually default question since the quake, "where were you at that time?".

Everything is electronic in a contemporary airport. I put my printout of e-ticket over the reader, and was very cordially directed to the security gate. As a Japanese, I am accustomed to these mannerisms, but for this once, a dash of thankful emotion surged towards those in uniform. I placed my MacBook on the tray, took off my coat, walked through the metal detector gate, and collected my things back into the bag. The whole procedure was something that had become a routine, something I took almost for granted. And yet, it felt so fresh and even "shining" after the nervous confinement in the aftershocks-rocked Tokyo.

My destination in this trip was Yamaguchi prefecture. Some 100 years before I was born, this region had been one of the centers for the major social change that brought about the modernization of Japan--The Meiji Restoration in 1867. Its unique status as the arbiter of modern Japan meant that people from Yamaguchi always occupied a central position in politics. 61 prime ministers have led 94 cabinets in the modern era. Of those, 9 prime ministers had come from Yamaguchi, including the first-ever Japanese prime minister, Hirobumi Ito, and the latest as I write this, Mr. Naoto Kan, who is currently carrying the weight of restoring Japan back to health after the earthquake.

Although the trip itself had an independent purpose, I made a point of visiting Shoka-sonjuku in the city of Hagi, Yamaguchi prefecture. It was my very first visit. Shoka-sonjuku, which literally means "village private school under the pine tree", was instrumental in bringing about the Meiji Restoration. In this now legendary school, Shoin Yoshida, the much learned and spiritual leader, taught young people and inspired them. His disciples later proved to be instrumental in realizing the revolutionary social changes that led to the modernization of Japan.

I always wanted to express my deepest respect to Shoin Yoshida somehow, the great teacher whose idealism and passion was a source of inspiration to those who envisioned a new Japan. The period in which Yoshida taught at the school under the pine tree was rather short. He began his lectures in 1857, at the young age of 27, succeeding his uncle's role as the headmaster. His lecture ran for just one year, during which time such notable young samurais as Shinsaku Takasugi and Hirobumi Ito were inspired to do what they could towards the building of a new Japan.

In the days eventually leading to the Meiji Restoration, the turmoil caused by the dying cries and oppositions from the "ancient regime" meant that many aspiring and innocent young lives would be lost for petty or fake charges by the powers that be. Two years after he assumed the role of headmaster at the school under the pine tree, Shoin Yoshida was sentenced to death for his alleged involvement in a foiled assassination attempt against a high Tokunaga shogunate official. He was only 29.

It was awe inspiring to stand in front of the building of the school under the pine tree, which remains to this day. It is such a small establishment. Nowadays, the name "juku" (private school) refers to prep school for entrance exams, which are usually conducted in an increasingly outdated "paper test" paradigm. What a trivialization of a once brilliant and intense idea. How do modern academic institutions such as universities compare with the humble and (you could almost say with much reverence) shabby school under the pine tree, in terms of passion and vision, not in terms of physical grandeur or authorities endowed on them by the government?

Histories are not easily forgotten in Japan, a nation always obsessed with its own past. In the year 2010, Japanese people earnestly consumed stories about those young samurais who brought about the Meiji Restoration. The sentiment was that it was now a time for great changes in Japan, and the stories of the enterprising young ones, who dedicated their lives towards the opening of new Japan, inspired people.

The year 2011, well before the devastating quake and tsunami attack, brought new wind of sentiment to the land of rising sun: It is good to appreciate the inspiring tales from the Meiji Restoration. However, if the appreciation was not accompanied by practical measures and tactful implementations, it would by all possibilities end as an unfruitful consumption of fantasies. The more than 150 years of distance in time from the Meiji Restoration meant that it was now possible to keep a safe distance between the current affairs and the vibrant turmoil of the bygone era. There was a danger that the story of Meiji Restoration would remain fairy tales, irrelevant to the contemporary issues. As the year 2011 dawned, the Zeitgeist was noticeably changing. People were starting to take things more seriously, at their factual values. Fantasy scenarios no longer sufficed. People were starting to feel restless.

It no longer appeared sufficient, or indeed appropriate, just to praise the events leading to the Meiji Restoration. Social parameters have changed. Time had moved on.

And then the earthquake struck Japan. Many things were "reset". In waking up from the aftermath, we were searching, not so much for an answer, but a direction we could follow.

It was at this poignant moment that I stood before the school under the pine tree. I was searching within myself, for a feeling that I could trust. The context had changed completely. Japan is in great crisis. My personal life would be also affected. Perhaps we would emerge out of this crisis as a different kind of people. Maybe the change will be dramatic. Alternatives would enter the main stream. Japan would be transformed, possibly beyond recognition.

The trumpet shall sound, and we shall be changed. The question is how, and in which direction? Standing in front of the school under the pine tree, I was searching for an answer. I am still searching for one now. 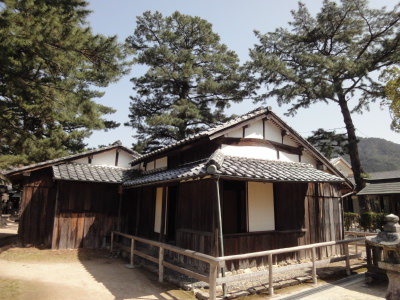 The school under the pine tree. (Photo taken by the author)
Posted by Ken Mogi at 10:41 AM 1 comment: