I went to the Kabuki-za theater in the central district of Ginza, Tokyo with my editor Ms. Yoko Oba, and Ms. Ayako Taniyama, who illustrates my essays on history in the Mainichi Weekly magazine.

One of the acts was Kanjincho. Although I have seen it many times, each time the experience is knew. A lot of discoveries are made, as is the testimony of any great classics.

This time, I was drawn to the visually stunning dramatic structure, in which the protagonists struggle, negotiate, get infuriated, and finally arrive at a humane and moving solution. It is as if a symphony is played out in front of your eyes using the bodies of actors, who are made up in exaggerated contrasts and dressed in conspicuous attire. The score is written in the implicit traditions of bodily language which have been handed down through the generations for hundreds of years.

The actors remain constrained in their bodies, and yet their expressive powers transcend time and space.

It was one of these moments when one realizes the bliss of a life in Tokyo. I simply love Kabuki.

The theatrical treat was followed by a culinary one in the Sushi restaurant Tsukasa, where the finest specimen of Maguro are procured and served through the eyes of Mr. Hiroki Fujita. 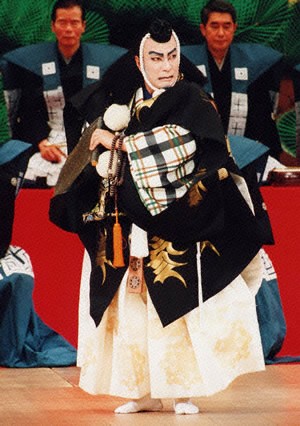 Visually stunning drama. A scene from Kanjincho.
Posted by Ken Mogi at 9:17 AM 3 comments:

From time to time I wonder: If I lived this time as a small school boy, what would I have done? How would I have felt about the goings on the world, how would I regard the people around me? How would I breathe in the air which is the beginning of the 21st century?

Occasionally, I encounter kids who remind me of my own youthful days. I observe them with great interest and empathy at these times, as they appear to be the echoes of my emotional and intellectual life of the past.

While vacationing in Taketomi island last extended weekend, I glanced upon a boy by chance. He was reading a book while strolling the venerable street of Taketomi, flanked by age old coral walls. The boy was deeply absorbed in his reading. From time to time, he would raise his eyes, and watch us strangers from a big city afar.

What kind of mental life is he nurturing, I wondered. How would it feel to be born and grow on this lovely island of a population of 342, with just 172 households, where everybody presumably knew everybody else?

How would he absorb the flying clouds in the sky? Would he be astonished by the great fruit-eating bats flying in the darkness of night? Would he pick up the seashells on the shore? Would he accumulate knowledge about the beautiful butterflies that inhabit Taketomi? Would he dream of going to the big cities, to attend places of higher education?

It was not likely that my life and his life would cross again in any significant way. However, that afternoon, on the coral island of Taketomi, my life resonated with the life of a diligent boy, leaving a bittersweet aftertaste.

I wish all the best in life for the little soul. 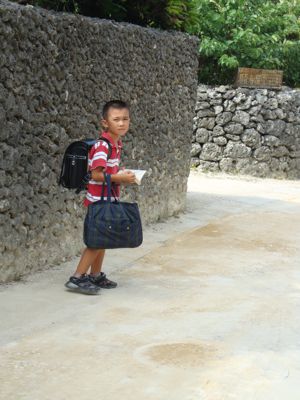 The diligent boy on Taketomi Island
Posted by Ken Mogi at 7:09 AM 3 comments:

A swarm of bacteria

The speed of the evolution of bacteria is rapid, as it multiples very rapidly, with corresponding changes of generation. It is natural that species of bacteria develop resistance to antibiotics within a short period, given the rapidity of its multiplication.

Humans, on the other hand, cannot reproduce so rapidly. The human evolution has taken another strategy.

Human evolution is characterized by sustainability, supported by the longevity of individuals. Although the "self" maintains its identity over decades, the elements that compose the self multiply and perish within a very short period.

Humans, in a sense, is a "habitat" in itself, in which the evolution of constituent entities occurs. Humans evolve most efficiently when behaving like a swarm of bacteria.
Posted by Ken Mogi at 8:50 AM 1 comment:

Breathing in the air on the subtropical Tametomi Island, old memories came back to me.

In February 2001, I traveled to Taketomi Island with some of my best friends. Notably, Yukio-Pegio Gunji was there.
On the first afternoon, we rented a bicycle and pedaled towards the beach. There was a small path, with weeds growing from both sides. As we sped through the vegetations, butterflies flew out of the shrubs and encircled us. Their wings deformed and changed positions in the air, like flower petals dancing in the wind.

It was a beautiful and yet fundamentally comical scene. We felt as if we were in a classic film. Some scholars and students dedicated to the research of complex systems riding the bike on a small island, with butterflies celebrating our efforts. The vision was striking and poignant. It stays with me to this day.

On this particular visit to the island, we made it to the butterfly road again. I found the path to be a little bit wider than in memory, perhaps due to an expansion work that has been done. Due to the seasons or other elements, there were less butterflies in the air, so I missed the replay of the movie scene with Yukio-Pegio Gunji. 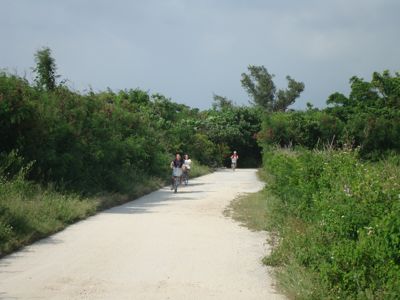 The butterfly road revisited.
Posted by Ken Mogi at 6:22 AM 3 comments:

I love the night breeze on a southern island. As we finished our dinner and gently walked home through the narrow paths, I looked up at the sky. There were stars. The milky way was clearly visible. Before knowing it, almost unconsciously, I was searching for the giant fruit-eating bats, which are characteristic of the subtropical islands around Okinawa.

I could not find one. Mrs. Maki, owner of the restaurant Maki, our favorite hanging-out place on the island of Taketomi, told us that there were less fruit-eating bats now, especially after the unusually strong typhoon that hit the island last summer. "Before that", she said, "the bats were flying over that tree beyond the house".

Without the blessing of the bats, we somehow coped. The night was as dark as it used to be, without the air-bound creatures which used to enliven the blackness enshrining our existence. 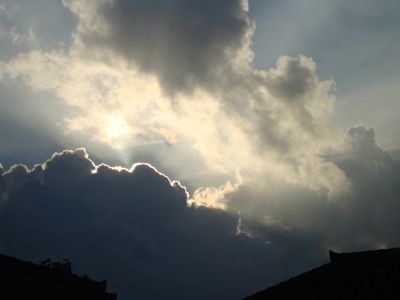 Every cloud has a silver lining. The magic of the sunshine on Taketomi island
Posted by Ken Mogi at 3:28 PM 1 comment:

Sunday came, and I traveled to the southern Island of Taketomi, one of the Ryukyu Islands. The district is called Okinawa, after the biggest of the Ryuku Island of the same name.

When I travel southbound, I go through a remarkable process of transformation. It is especially true in the case of Okinawa.

The moment I get off the plane, the process starts. I am in a mood to take off my belongings from civilization, e.g. the watch and socks. The tendency gets stronger as I travel further from the airport, cross the ocean on a boat to arrive at a small island, like the Taketomi island.

I prefer not to take any job to an southern island, as I would like to relax without caring about what I have to do. However, sometimes I am obliged to take some assignments, as in this particular trip. This morning, while my students were visiting the Utaki (sacred places in Okinawa Style), I was busy typing my manuscript on a desk in the gardens of the Minshuku we are staying.

As I worked very diligently, I could finish my job before noon. I spent the afternoon taking in the sunshine and the wind in a westward-looking beach. 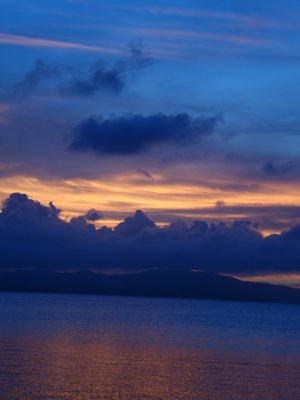 The sunset in Taketomi Island
Posted by Ken Mogi at 3:27 PM 3 comments:

This Saturday in Tokyo was characterized by occasional rainfalls, which became quite strong from time to time, verging on being a pouring rain. As I move around in cars, I did not have to use an umbrella. I do not mind the rain so much when I do not have to cover the space above my head with the nuisance of an umbrella. I hate separating myself from mother nature.

I love to listen to the rainfall in the safe haven of the indoors. It is simply scrumptious to read a favorite book on the sofa, while occasionally paying attention to the rhythmical sound of the raindrops.

As I recall. there was a particularly memorable rainfall in Chicago. I was 22, and was attending the 38th Japan America Students Conference. As the schedule on that fateful day was to meet with some important people, we had our best suits on. The day started with a bright sunshine, so we did not expect anything nasty to happen weatherwise. An American participant told me how there were flats in the skyscrapers in Chicago. The residents living in the upper floors are "above the cloud level", so that they sometimes have to ask a friend on the "earth level" how the weather was down below. The story amused me. There was apparently no need to worry about the weather on that day.

I was mistaken. We were all wrong. Suddenly, a black cloud gathered in the sky. Literally in minutes, the rain started to fall with a vengeance. We were in the middle of an open space, and there was simply nowhere to hide ourselves. Needless to say, nobody had an umbrella. We became soaking wet.

As abruptly as it started, the rain stopped without warning. The sun came back, and we were soon basking in the sunshine, while the water dripped from our noses and sleeves.

Alex began to laugh, with the characteristic, whole-hearted laughter that was Alex. I began to laugh, too. There was something amusing and refreshing in that savage exposure to the wild weather of Chicago. It was as if we were embraced and kissed by mother nature herself.

The experience was divine, and I remember it vividly to this day. The Chicago rain is one of my favorite wet memories.
Posted by Ken Mogi at 7:07 AM 1 comment: