It was my first visit to the Googleplex. Impressive. The atmosphere of playfulness and serious concentration was resonating and just fine for me.

We registered at building 40. Lots of interesting people around me. We got out badges, souvenior paper weight with 3D laser sculpture. (Mine was the fractal Julia set. Others were DNA structure and geomagnetic field. Cool.)

With a glass of wine in hand, I took a brief stroll in the campus. Four men were playing beach volleyball. There was a whole T. Rex skeleton, with birds sticking out of here and there. There were posters recruiting people for film gatherings and table tennis tournament. The dress code seemed to be "google casual."

In the opening session, we introduced ourselves each briefly with three key words. Daniel Kahneman was there. Larry Page said hello to the participants. The organizers from Google, Nature, and O'Reilly made interesting opening remarks. How stimulating the whole thing is!
Posted by Ken Mogi at 10:43 PM 3 comments:

This taxi driver has developed a cognitive filtering machine.

So here I am in Sunnyvale, California. It is 2:42 p.m. local time. In the evening, I will be attending the Science Foo Camp sponsored by Google and Nature. After I am done with this blogging, I will most probably take a nap, as I could not get adequate sleep on the plane.

I originally thought of hiring a car, but then judged it was probably too much trouble. Therefore I took a cab instead. I always enjoy conversation with the driver.

We were discussing the high tech devises on the car. The driver pointed to a camera and said it captured 8 hours of video, looping. "Do you get any strange customers?" I asked. "Yes", the driver said. "Especially at night. You know when people are loaded, when they are drunk, they sometimes behave strangely. But you can tell pretty well whether a guy is going to behave strangely when he is standing on the road." "Really?" "Oh, yeah. When a guy is waving his hand like that, or is standing in the middle of road, you can pretty well tell that he is going to make trouble. I just pass by them."

So it appears that this taxi driver has developed a cognitive filtering machine, telling potentially troublesome customers beforehand. A good adaptation. I am curious about the specific details for classification, though.
Posted by Ken Mogi at 6:50 AM 2 comments:

Being in a minority position is not without its joys.

Throughout my life, I seem to have been enjoying the status of being a minority.

In the junior high, I used to chase butterflies in the field, and read grown-up's books. That was an attitude not ubiquitous among us brats, so I was always looked at as if observing something strange.

As I grew up, my tastes seemed to be shift into increasingly exotic areas in terms of sensitivity and feelings. I had to hide my true nature from time to time, but then I started to encounter people of my own kind.

I remember quite well the rubbishings and abuses we Mac users used to receive from the majority of people who uses the import from Seattle. They said that Macs are for fun and not for serious business. Corporations and schools matter-of-factly announced that their systems and apps were not compatible with the Mac. What do you care? Many computer viruses also turned out to be Mac-incompatible.

When waiting for the train in a Tokyo subway station, I tend to stand in the corners or at the farthest ends of the platform, away from where most people stay for convenience. For me, being alone seems to be more important than seeking convenience.

And the last straw is the problem of qualia. Many "serious" scientists laugh at it as if it is a pseudo-problem. They tend to maintain that functionalist approaches based on connectionist models are sufficient. Again, what do you care. One cannot change what one believes based on empirical observation and application of pure logic.

Being in a minority position is not without its joy. When you are in the majority, it is not that difficult to find people with whom you can resonate. Being in the minority, friend-making becomes an art in miraculous encounters. For example, if and when you find people who are seriously interested in the problem of qualia, that can give you a joy that lasts all your life.
Posted by Ken Mogi at 9:05 AM 4 comments:

May Ebizo and Mao live happily ever after.

I attended the wedding party of Ebizo Ichikawa, the young and great Kabuki actor. The Kabuki is a miracle, as it is both popular and artistically very refined. Very few genres of art achieve these often incompatible goals.

Ebizo is a great person. He has the savageness of a beast, as well as a fine-tuned intelligence of a noble man. The lady he chose as his partner, Ms. Mao Kobayashi, is a well known newscaster and a very beautiful lady.

Once on stage, Ebizo can become very furious. He can portray characters very remote from human dimensions. His energy then truly approaches that of a dragon. However, this evening, Ebizo was just a very happy man, grinning all the time. May Ebizo and Mao live happily ever after.

Ebizo and Mao cutting the cake. From asahi.com.
Posted by Ken Mogi at 12:01 AM 1 comment:

My favorite bar in Tokyo is "EST" in Yushima. The first time I visited this legendary bar, I was with Ken Shiotani, my fat philosopher friend. We had just turned 22. Shiotani was actually not that fat at that time. Then his belly area started to grow rapidly, and outpaced the Japanese economy.

I have a vivid image of the first night at EST. We were wandering in the small streets of Yushima, and Shiotani said out of the blue that he had a place that he wanted to try out. At that time, it was mainly Shiotani that came up with the proposals. I was rather a naive boy in the field of culinary and alcoholic delights. Shiotani was quite eager in this respect, which probably accounts for his big gain in weight.

The walk brought us to a thick wooden door. Inside, we found a polished bar table and a man in white cook coat with a gentle smile. That was Mr. Watanabe, master of EST. 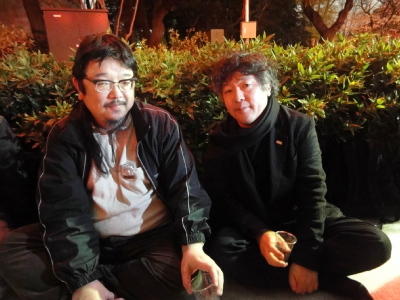 With Ken Shiotani on the "Hanami" (cherry blossom admiring) night this March.
Posted by Ken Mogi at 9:46 AM 6 comments:

As I go about my life, I meet many people. Some are famous. Others are young. Many are experienced. A few are truly awesome. I seem to appreciate the individualities of these persons in many different ways. One of the most important, however, is what I would call a "passion meter".

The question is how passionate a person is about his or her life. Passion can be nurtured in adversities, so the superficial success or failure are not that important. Intelligence also does relatively little to do with the passion level.

When professing a cause, the key concern is how deeply the antagonist actually believes in that cause. In many cases, people are just saying niceties, and do not actually put their energy into the realization of the causes. Some people are too established to really care for other people or themselves.

The greatest tragedy in life is the loss of passion. When a nation or a society suffers from it, inevitable decline follows. In many cases, people do not notice the decline, as their eyes are blind to the fact that they can convert difficulties into passion, if and only if they have the courage to do so.

So I go about the world today again with my passion meter. When I encounter an outlier of magnitude in the passion measure, I consider it as one of the rare blessings to my life.

Responding to the invitation of a senior high school headmaster Mr. Kawasaki, I gave two lectures in Sapporo. After the strenuous but enjoying hours, I strolled in the streets towards a local restaurant. It is always refreshing to venture into the unknown. Your instinct to discern the good from the mediocre, the tasty from the not so tasty, is highly invoked and something in you that remained dormant for so many years become active.

It occurs much slower than in a video game. The number of choices are also limited. You cannot fast-forward or keyword search.
But then everything is embodied, here and now.

Finally, we decided on a fisherman's restaurant. The defining moment is the taste of the evening's first beer. As I talked into the late hours with people from around the northern city, the joy of being on the road slowly unfolds itself.

In traveling, you are lost once and then find a transient home. You rest your weight on the newly found ground and then dissolve it without regret. The rather quick procession of things assures that your life is well revived and taken care of. You find that, once again, traveling has refreshed the life in you.
Posted by Ken Mogi at 8:19 AM 3 comments:

The 10 years wait of James Joyce

The Dubliners by James Joyce is a sublime example of English prose work. Written in 1904, the classic masterpiece, however, did not get published until 1914. Seen from the perspectives of today, there is nothing objectionable in the work. At that time, however, some of the expressions in The Dubliners (such as "have a girl") were considered inappropriate.

The fact that James Joyce could not get his work of genius published for 10 full years is a testimony of the fact that reception is not always automatic or immediate.

Let the 10 years wait of James Joyce be a source of inspiration for every young would-be creators and young-at-hearts.