One of my best friends, Ken Shiotani, went to University of Tokyo for many years. First he finished the master's course at the mathematics department. Then he went on to work at the Ministry of Health, Labour and Welfare. Having met his wife and thus getting a means of living, he happily quitted his job, and went back to the campus, this time as a graduate student at the philosophy of science department. He stayed in the department for 9 years, the maximum time allowed by the regulations. After graduating, he has held no position basically, except for a brief period of time when he had a job at University of Chiba. Shiotani has been a "philosopher at large", known for his sharp intellect and powerful speech deliveries, but without any steady or even temporary jobs.
For some years I hoped that he would one day get some position, but having seen how institutions destroy the free spirit by numerous administrative chores, and a false sense of self-importance, I now feel that his position as a freelance philosopher is probably the best one.
I don't know why, but I thought of him first thing this morning, after having had a very strange dream involving a chair and a cliff. 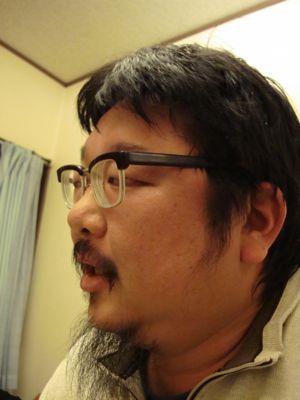 Ken Shiotani, the philosopher at large. 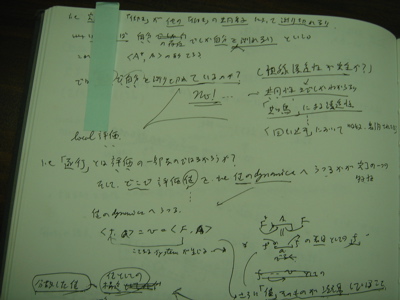 Ken Shiotani's notebook of philosophical ideas.
Posted by Ken Mogi at 8:39 AM 5 comments:

Seals and the violin.

I have some practical recollections to catch up after this long pause in writing.
It was back then. I was there. I visited Scotland in June in 2008. My fellow traveler was Mr. Seiichi Koshimizu, the venerable chief blender of Suntory. It was a trip focused on whiskey. From Glasgow I flew to the island of Islay. There, after observing the process of whisky producing in the Bowmore and Laphroaig distilleries, one day I was driven to a beautiful small bay.
There I was to meet with Fiona Middleton. Fiona was quite an interesting person. She plays the violin to the seals in the sea. She played on that day, too, while the seals lay relaxed in the ocean water. The music was beautiful. For seals, humans, or otherwise, it was a very enjoyable experience.

Fiona was a person full of exquisite charms. She also had a vivid sense of humour.

"So this is in a sense a music therapy?" I asked.
"No", Fiona said. "I apply conventional medicine if I wanted to cure the seals".

"What do you do?" Fiona asked.
"I am a brain scientist", I answered.
Fiona then said in a half serious, half laughing voice.
"Do you think I am a bit strange?"
"Oh no! Not at all. Why do you ask?"
"Because sometimes people do think I am a bit weird."

The way Fiona said it, in a calm, soothing voice, still lingers in my memory. It was an unforgettable afternoon, with the seals, the violin, Fiona Middleton, Seiichi Koshimizu, and myself, embraced by the sunshine, the wind, and something quite indescribable. 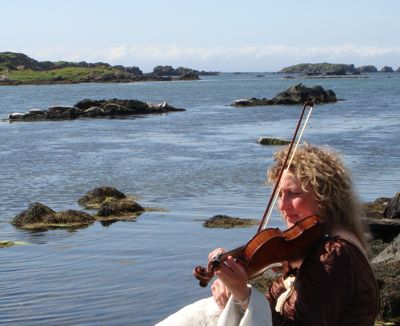 Fiona playing the violin to the seals. 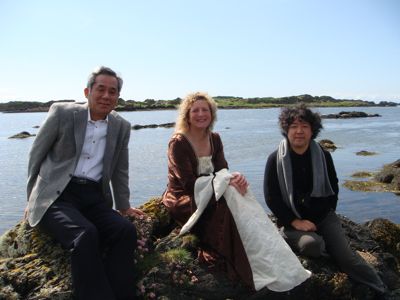 Seiichi Koshimizu (left), Fiona Middleton, and me (right)
Posted by Ken Mogi at 9:55 AM 2 comments:

One of my favorite Picasso pieces is to be found in the Guggenheim museum in New York. My encounter took place almost a decade and half ago. Still the impressions are vividly with me. 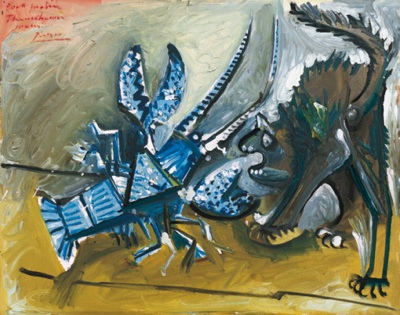 Marked by rough touches of the brush, the work leaves parts of the white canvas unpainted. Even so, the lines are simply divine. It is said that Picasso's father, himself an accomplished painter, gave up teaching his son how to paint as there was nothing more left to teach. "Le Homard et le chat" is a testimony of the spiritual "freedom" that the painter attained at the ripe age of 84.
The visit to the Picasso museum in Paris some years after the Guggenheim experience further inspired me with the depth of "freedom" that Pablo Picasso came to enjoy in his career. As is well known, the master left an enormous number of works behind. The more familiar Picassos are "market friendly", filtered by the desires of the public. His paintings would fetch astronomical prices. Specimens of earthenware painted by Picasso are very tradable. The popular Picassos are now everyday icons in the art world and beyond.
However, some of the pieces that I've witnessed in the Picasso Museum were clearly not "marketable". There was a real Small White (Pieris rapae) butterfly sticked on a cardboard. Sculptures were constructed out of iron trash the painter scavenged while walking around his Paris domicile. These works were clearly not done for commercial purposes. The painter was simply pursuing the pleasure of expression. Even with the name of Picasso, it is not apparent if these items would sell well in the market. But apparently, the artist could not care less.
Pieces found in the Paris museum are those with which the great master did not part until his death. Wandering among those precious pieces filled one with foods for thoughts. What is the nature of "freedom" that Picasso tried to embody with his works all his life? One of the founders of cubism, Picasso continued to search for new venues of expression. We are dazzled by the changes in his style. When the mist clears above the great sea of changing tides, what remained invariant all his life must be sought for and grasped.
Contemporary brain sciences tell us that freedom is not chaos. Being free is not equal to "laissez-faire". There is a silver lining of internal discipline in every cloud of freedom. The "Le Homard et le chat" painting that I admired in the Guggenheim museum was constituted of lines that simply had to be. Finding inner constraints to follow could inspire one to be free from the trivialities of conventions.
One can be free while being constrained by invisible rules of aesthetics. The paradoxical co-existence of constraint and freedom is the origin of consciousness, and the raison d'être for all artistic endeavors.
When I saw the Guernica, Picasso's Opus magnum in Madrid, I was reminded of the plume of passion within the artist. On hearing the news of atrocity inflicted on innocent townspeople during the Spanish Civil War, the artist finished the masterpiece in a short time, fuelled by rage. The piece, although political in its conception, is rather tranquil in its impression of beauty. One is rather reminded of the paintings in Lascaux and Altamira, in terms of the great continuity of quality and perception.
Picasso's works seem to be the fruits of an all-out freedom, but actually follow a strict ethos of the senses natural to the artist.
A secret that would ultimately bless every moment of our earthly lives is hidden in the paradox of being sublimely free and hopelessly bound at the same time. In search of the answer, I sometimes find myself in front of a Picasso painting.
Why is it that for the human spirit the arts are indispensable?
Why does man not live by bread alone?
At such occasions, I sometimes feel ever so close to the truth hidden from the very beginning of human history.

("Constraints and Freedom" by Ken Mogi. Translated from Japanese by the author. The original article will appear in the "Masters of Western Paintings" series, a weekly magazine to published by Shogakukan, Tokyo in 2009)
Posted by Ken Mogi at 9:58 AM 3 comments:

It has been sometime since I made the last entry into this blog. I don't know how this long absence has taken place. I have been busy, giving lectures at places (most of the time within Japan but from time to time outside of it), writing neuroscience papers with my students (one of them, Takayasu Sekine, has had his paper recently accepted by a fine journal. Good for him!). I had to write essays after essays, which appeared in magazines and books et cetera, to keep the deadlines. My initially casual commitment to Japanese televisions has over the time become a more involved one, taking some portion of my time. All these elements, taken together, might have contributed to my not writing a blog in English for more than 6 months. On the other hand, I have kept my Japanese blog almost on a daily basis.

(My Japanese blog in the original langauage)

(( My blog through English translation. Even with the great technologies adapted by google the result of machine translation is devastating.)

The lesson is that one can be distracted from something. Even when that "something" is previous and meaningful in one's life. Some time ago, I made a vow to conduct more activities outside the Japanese domain. Writing scientific papers is not enough. I would like to write books in English, let the little things coming out of my research and life breathe the air of the broader, wonderful new world. I am making efforts, but not enough has come out yet.
Not that my activities in the Japanese domain are meaningless. There are thousands of languages spoken on this globe. Every single one of them is important, has an equal right to flourish and nourished. Japanese is only one of them. So is English. My wish to express in English is historically incidental, privately desired, supported by some demographic evidences. And the love to the mankind.
Now that I have made this entry after this long silence, I feel the tiny "English muscle" in my brain itching, ready to be let free to follow its instincts. Let's see what the year 2009 brings.
Posted by Ken Mogi at 10:34 AM 3 comments: