On August 9th, 1945, an airplane approached Kokura, a city in the northern part of Kyushu island. My mother, a girl of 9 then, lived in Kokura with her parents. It was a cloudy day at Kokura. The airplane circled above Kokura, looking for a break in the cloud. But the cloud covered the city, and the fuel started to run low.

So the plane went to Nagasaki instead.

So I owe my existence to the cloud over Kokura on that fateful day.
Posted by Ken Mogi at 7:52 AM 3 comments:

I have not figured out how and why yet, but I do observe that creative people sometimes have very strong visions, bordering on the hallucinatory, which would, taken literally, raise the eyebrows of a rationalist.

I met with one of Japan's leading photographers, Shimpei Asai, the other day. One of Shimpei's famous works was when he photographed the Beatles Japan Tour in 1966. He captured the Fabulous Four in many interesting poses while they relaxed in Tokyo hotel rooms, etc.

Shimpei is a man of common sense and a sharp sense of aesthetics. I enjoyed the conversation hugely, appreciating his deep understanding of the human condition. Then, in the middle of our conversation, he mentioned matter-of-factly that he had a guardian angel named Gabriel.

"Gabriel would come while, for example, I am having a meeting with a group of editors. When I notice that Gabriel has entered the room, I would smile to Him. I smile very secretly, so that the people around me don't notice it".

The advent of Gabriel was so sudden that it took me by surprise. But then, the conversation was practical and quite logical otherwise. Gabriel was the only hint of "insanity" (in the conventional sense) that came along during our two hours long discourse. Shimpei was very considerate of people's feelings, exhibited a broad knowledge, and above all very intelligent. Gabriel was like a gush of wind that suddenly came and then went away, leaving an enchanting fragrance.

I wonder if there isn't always a Gabriel in creative people's mind life.
Posted by Ken Mogi at 8:38 AM 4 comments:

I regard this blog as an experimentation in the expression of things I encounter during the course of my life. I started to learn English at the late age of 12 as I entered the junior high school, and then only very clumsily and slowly. That means that a vast domain of my own experience since childhood is not "tagged" and "structured" within the context of the English language.

I suspect that there is a common problem shared by people who have learned a second language only relatively late in their life. Namely, the accumulation of personal experience since infancy has not been transferred properly into the universe of the second language.

When a speaker utters a word, all the details of the history of his life is behind it, giving the speech force and energy. Only after the translation of at least the salient episodes of one's life can one be expressive in the second language.
Posted by Ken Mogi at 5:27 AM 9 comments:

The speeches of some people reach us as heavenly music. With some people under certain situations, every second of listening to becomes a torture.

People don't realize that the art of talking is not simply that of a manipulation in meanings. When speaking, people become musical instruments. The expression "it is music to my ears" is a compliment for those who excel in this art of speech. It is not only a metaphor. It is a very accurate description of what is actually happening.

The art of speech is not unidirectional. While listening to others, people become musical instruments themselves. By immersing ourselves in the flow of words, we can resonate to what is being said, magnifying and sometimes even going beyond the original intent and scope of the speaker.

Thus, without holding a flute or sitting before a piano, we can train ourselves as musical instruments, as we go through the usual rounds of everyday life.
Posted by Ken Mogi at 6:06 AM 1 comment:

I admit I used to be very clumsy in my youth. During my senior high school days, I found it difficult to talk to girls naturally. I attended a co-ed school, so there were many opportunities, real and imagined, to get friendly with my female counterparts. But these occasions almost never materialized. I was enshrined in an imaginary kingdom of books and music, and just looked straight on to the unforeseen and uncertain future.

It is not that I was not attracted to the feminine. In those days, I used to draw pictures of girls stretching one arm towards the moon in the sky. In my imagination, the moon was silvery, and glistening very brightly in the darkness of night sky. The girl had a long hair, and was always looking towards the moon, with her eyes gazing at the shining satellite of the earth. I felt a great sympathy towards this girl of strange behaviors. There was no real person who served as the model. I do not know what the moon girl symbolized.

A lot of waters have flown under the bridge, and my clumsiness melted away, opening my way for the admittance into the human race. Yet I still remember the moon girl very vividly. There is still some energy surrounding her, so apparently a part of me is still in the moonshine. To commemorate the still unnamed existence of my youth, here I make a rough reproduction of my celestial soul mate of bygone days. 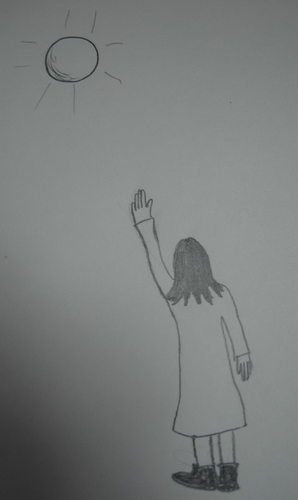 The moon girl. Reproduced by the author.
Posted by Ken Mogi at 6:14 AM 4 comments:

Laughter is very much related to the emotion of fear and uneasiness. The classic act of a man tripping over a banana skin involves the danger of physical injury. The false-alarm theory postulates that laughter has evolved as a mechanism to reassure one's mates when a possibly menacing situation has dissolved. The banana skin act is comic because it hinges upon physical vulnerability, while not being actually damaging.
One is captured by an urge to burst into laughter when one is inherently fearful or uneasy. I vividly remember an example from my own childhood. When I was in the second grade of elementary school, suddenly a "milk scare" seized us boys. This was nothing serious for the health. It was a comic scare.
I don't exactly recall who started it, but I can testify that before knowing it, I was one of the active protagonists. We were served with school meals during lunch time. The idea was to say funny things or make comic gestures while somebody was drinking milk from the bottle. The victim would burst into laughter, and squirt the milk into the air. I remember a particularly effective operation when one of my best friends literally became a white fountain. After the incident, there were stains of white liquids all over. Some of them were on our faces and hands. We the brats shouted merrily in the aftermath, and bursted into peals of laughter.
Although the whole thing was done in good spirits, we were literally scared all the same. Fearing that somebody would make you laugh, you drank up the milk as soon as it was delivered. The enormous peer pressure in the form of forced milk drinking is still clear in my memory. Looking back, I think the milk scare taught me the essence of the origin of laughter, long before I came across any scientific theories of mirth.
When we became third graders, the manner in which the school meal milk was delivered was changed. The milk now came in a "Tetra Pak", with a straw attached. Drinking milk then changed from a savage gulping to a gracious sipping. The days of our milk scare were over, much to our regret and relief, although we would never admit to the relief part before our fellow brats.
Posted by Ken Mogi at 8:37 AM No comments:

When I was a kid, I used to eat a lot of bad things. Outlets of dagashiya, which literally translates as "junk sweets shop", used to be our favorite hanging out places. Incredible things were consumed by today's health conscious standards. For example, there was a "sweet paper", which tasted sweet when you licked it. In addition, your tongue would turn into red due to the color additives. Modern kids will roll their eyes to hear that. Who would want to taste a just plainly sweet paper? Didn't they have more nice things to eat?
Those were the days when sweets were still considered as luxurious (I was born in 1962), and kids got a kick out of tasting sweet things. It was a time when the Queen of Sweetness reigned in the kingdom of children.
I sometimes wonder if the degree of health-consciousness at one era is not reversely correlated with the overall energy as living organisms of the members of the society. When you are full of energy to live, and are very active doing this and that, you eat and drink what you can get, and do not really care about the supposed qualities of these things. I wonder if there aren't similar phenomena in other countries and cultures.
Posted by Ken Mogi at 7:55 AM 6 comments: