No award is premature

The decision of the Nobel committee to award Mr. Barack Obama the Nobel Peace Prize was laudable. Some people might say that it has been premature. I disagree, considering the nature of the human mind.

With recognition comes self reflection, as recognition, by its very nature, involves the vision of the others. Recognition can and should be the basis for further development, within the context of the relations with others. With recognition one can step forward with increased courage. Mr. Obama is now likely to be more invigorated in his efforts to make the world a better place.

In elementary school, the teacher sometimes hands out awards. Considering that the recipients are very early in their "career" indeed, every recognition that a child receives is arguably premature. From the point of view of the development of the child, however, no award is premature.

It is nice to learn that the award committee of the world's most prestigious prize knows the human nature well.
Posted by Ken Mogi at 9:08 AM 2 comments:

When I was a kid, I found it really difficult to swallow the pills. It was not that the pills were particularly large. These were ordinary pills for the kids, prescribed by the doctor when the child had a cold, stomachache, etc.

When I got sick, I would go to see Dr. Hishikawa, who had the office near my parent's house. When Dr. Hishikawa said "I am going to give you some pills", I would wince, as I knew that I was going to have a hard time swallowing one.

From the perspectives of adulthood, it is difficult to explain why it was so difficult for me as a child to swallow the pills. It was partly psychological. I simply could not take the pills down the throat, no matter how hard I tried.

My mother would say, "what if the doctor told you that you are going to die if you don't swallow this pill?"

I could not figure out what I should do in such a circumstance. The plain fact was that I simply could not swallow the pills.

As a result, I always had to take powder medicine. Oh boy, these were bitter. My mother would say again and again, half jokingly and half reproaching, that I was inviting my own misfortune by being unable to take the pills.

Many years later, when I read "Thus Spoke Zarathustra" by Friedrich Nietzsche, I came across the famous narrative of a man who was bitten by a snake in the throat. Then I remembered my childhood miseries, and felt that the whole experience was rather like this episode in the philosophical novel.

I was six or so when I was finally able to swallow a pill down the throat. I remember the sensation quite vividly.
In Zarathustra, the unfortunate man finally rises by biting of the snake head, and stands, with his eyes glittering like the blazing sun. The new man is born.

As I look back, it feels as if I saw the burning flame of life by being able to swallow the pill finally, at the mature age of six.
Posted by Ken Mogi at 9:09 AM 6 comments:

Without even knowing it, one becomes a prisoner of one's own prejudices, I thought.

I was in a Tokyo bar as the typhoon number 18 approached the Honshu island.

Why cant we break it. How come we can't let free of the chains we are just imagining?

As my compatriots are in general rather restrained, I sometimes feel as if the imprisonment is mirrored into my own system. Implicit connotations are good thing for a culture, but sometimes it can also suffocate one.

The typhoon number 18 was approaching. It brought with it the tremendous energy of the south sea, where the temperature is high.

As I left the bar, a gush of wind blew against my umbrella. I almost wished that the umbrella would be destroyed, exposing me to the brutal forces of nature.

But it wasn't to be. 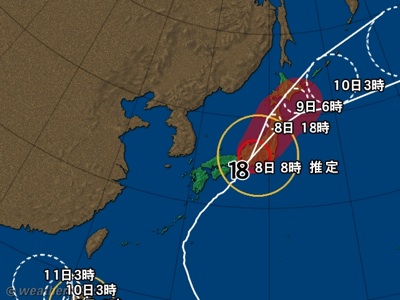 The typhoon No.18 approaching Honshu island.
From a Japanese weather forecast, 8 a.m., 8th October 2009.
Posted by Ken Mogi at 8:45 AM No comments:

I went to the Superdeluxe club in the Roppongi district of Tokyo. I was late, having finished my work for a broadcaster at 22 hours.

As I arrived at the scene, a young artist started fighting against the wall. He first scribed unintelligible words involving "peace" and " will", and then painted them all over in blue. He used the hands and pressed them very hardly against the wall, as if rebelling against it.

When young, you are naturally surrounded by many walls, both real and imagined. When you get older and become mature, being able to keep seeing the wall that be is one of the manifestations of a creative mind.

In life, you've got to face the wall, more or less, and it becomes incumbent to decide your attitudes toward it.

Painting. What fantastic way to come to terms with the wall. You don't destroy it. You dance with it. By becoming one with the wall, feeling its physical brutality, you can give birth to a monster that is art. And then the monster breathes beautiful air. 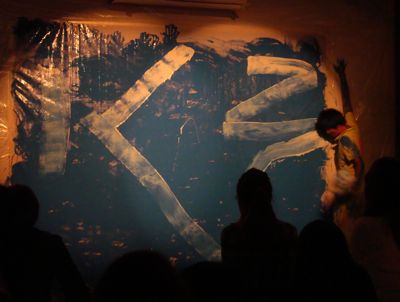 A young artist fighting the wall in Superdeluxe.
Posted by Ken Mogi at 7:31 AM 4 comments:

The return of Soseki Natsume from the two years' stay in London, in retrospect, was a watershed in the cultural history of modern Japan.

Records show that he was an excellent writer of English. His knowledge of the English literature was vast and deep, reinforced by intensive readings of volumes of the genre during his stay in the United Kingdom. Had he chosen to do so, he could have started a successful career in English prose, rather like Mr. Kazuo Ishiguro of contemporary times.

However, history had it that Soseki chose to write novels in Japanese, much to the benefit and enrichment of the Japanese literature for sure, but effectively closing the Japanese mind at the same time.

To date, considering the significant presence of Japanese economy, it is astonishing that Japanese intellectuals have produced so little in English writings. Surely, natural scientists do write papers, but then the expressions tend to be dry and do not reflect the subtle nuances of living on the island. It is a remarkable fact that there has not been an active English voice based in Tokyo, The Japanese scholars, especially in the humanities, have been primarily importers rather than exporters.

The result is a void in which the inner visions have never found a channel for expression. Such novels as "Memoirs of a Geisha" has strange connotations seen from a insider's viewpoint, as if the proportions are distorted and feelings were trodden on. The film "The Last Samurai" was in many ways a joke in facts and sensitivities.

These misrepresentations are all due to the lack of vigor in Japanese intellectuals in expressing the insider's viewpoint in the lingua franca, to the loss of both the island inhabitors and people at large.
Posted by Ken Mogi at 8:18 AM 2 comments:

It is often said that the stream of consciousness was discovered by the great American psychologist William James. Needless to say, the stream has been with us always, ever since our birth, before WJ. It is only that the particular way of looking at our own experience, in its phenomenological dimensions in particular, solidifies and defines itself only with the explicit introduction of this concept.

Once in a while, during the course of the day, I would think about the stream of consciousness. How subtle are its manifestations. The ups and downs, the subtleties, multitudes of nuances, anticipations, apprehensions, sweets and bitters.

Even for a brief period of, say, one minute, it is not possible to give a full description of the stream of consciousness. We can only witness in helpless promised amnesia its magnificent processions before our own eyes.

The phenomenology of subjective experience is then a hopeless battle of the ever losing and being lost, rather like the explosive grandeur of Olivier Messiaen's Turangalîla-Symphonie.

What solace and disappointment to this mortal soul!
Posted by Ken Mogi at 8:07 AM 1 comment:

I have been up and doing recently, for quite a long time. Galloping has to stop somewhere and sometime. Now seems to be the time for reflection.

Took a deep dip in the hot spring. Tasted the water from the bathtub. Pondered how divine is every thing. Between earth and heaven.

In the Okinawa Islands, there is a saying.

The moon is beautiful on the thirteenth night.

The girls are beautiful in the seventeenth year.

When I look up at a beautiful moon, I am wont to think of this poetic song. I first heard it when I was 10. I have been missing its touch ever since.

When you do too much typing, you feel as if you were starving, as if your inner words reservoir was getting low. Then you read a beautiful essay written by a lonely soul. You feel replenished. You can go on again.

You have a full moon in your soul again.
Posted by Ken Mogi at 7:10 AM 3 comments: