Some time ago I received a mail about my 11th April blog from Janice Tay. Janice is an active writer originally from Singapore, who now stays in Kyoto. In the mail, she said that she was planning to write an article for the Straights Times, a venerable English newspaper founded in 1845. Janice asked if she could mention my blog in that article. I was overjoyed.

Janice's article titled "When closed doors set us free" has now been published on the 14th July issue.

Janice's blog.
http://thesoundofonehandwaving.blogspot.com/
Posted by Ken Mogi at 11:09 AM 3 comments:

Some time ago, I met with Prof. Lisa Randall of Harvard University at a lecture and discussions session held in Koshiba Hall at the University of Tokyo. I am an alumnus of the Physics Department of this university, where Prof. Emeritus Masatoshi Koshiba (Nobel Prize in Physics, 2002) used to teach.

One of the marvels of contemporary physics, from the eyes of an interested onlooker, lies in the belief that the power of logical consistency is pushed to the limit. Assuming that the laws of physics such as general relativity and quantum mechanics hold, one can make certain conclusions about the origin of the universe, scales of parameters involved in forces and particles, etc. What is remarkable is this belief in the "extendability" of the power of logic. For example, by applying the currently known laws of physics, one can make certain conclusions about the dynamics of the generation and annihilation of the universes, a great multitude of them in fact, one of which we supposedly inhabit.

Lisa's combination of logical rigidity, a well-balanced sense of humor, and healthy common sense was a great charmer for the full packed audience. Lisa's powerful role in generating new results as well as communicating about them to the general public is a super nova. The session was recorded, and will be broadcast on NHK (Japanese public television) on the 25th of August, 2007. 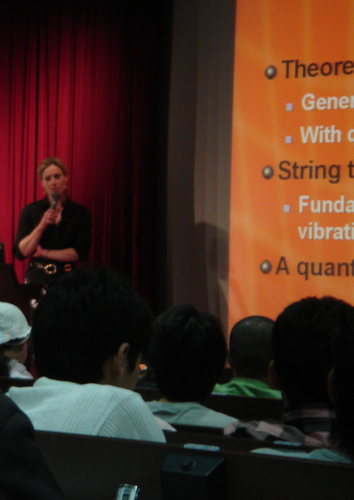 Lisa Randall lecturing in Koshiba hall, University of Tokyo on 28th July 2007
Posted by Ken Mogi at 10:47 AM No comments: