Shift of mood in the saga of Japan's coping with the coronavirus.

With the outbreak of COVID-19, countries all over the globe have taken stringent measures. Japan has been one of the rare exceptions, where even a partial lockdown has not been taken.

Things have started to change a bit in the run-up to this weekend. On Friday, Ms. Yuriko Koike, the governor of Tokyo spoke at a press conference and suggested that people refrain from going out unless necessary. The wordings and the regulations behind were not so draconian as in other parts of the world, but the Japanese people took the message. In a characteristically obedient response, there were very few people in the central districts of Tokyo on Saturday, with many shops and restaurant closed or operating under reduced staff and opening hours.

The reaction to the coronavirus outbreak has been varied across countries, and it is interesting to observe how the dramatic development is being played out here in Tokyo and elsewhere in Japan. I am of course very much concerned with health and safety. At the same time, I would be actively interested in how Japan copes with this difficulty in her own way, as somebody born and grown up in this country.

Semantics is a part of the mind-brain problem.

Although research on artificial natural language processing has made great progress, so far it is avoiding the most salient feature of language: Meaning of words.

For sure, among some circles a call for taking the semantics seriously would stir (superficial) jeers. However, at the end of the day, the meaning of words is the most obvious thing to tackle if you want to take natural language seriously.

Phenomenologically speaking, meanings of words are instances of intentional qualia. As is true for qualia in general, statistical approach cannot uncover the fundamental aspects of the meaning of words.

Statistical learning has made great progress in recent years. Feats like GPT-2 are impressive. However, these statistical methods cannot tackle the semantic sides of language no matter how impressive their results might appear.

Semantics is a part of the mind-brain problem. Technical separation of language processing from consciousness studies is good for a while, but it cannot be the ultimate route for understanding why and how we speak.

The conundrum of the COVID-19 lottery.

One of the cognitive difficulties involved with COVID-19 is that the whole things is like a lottery.

You can take care and make necessary precautions, but it is always possible that you get the bug after all.

Once you are infected, you may be OK with only slight symptoms. On the other hand, you could proceed to severe symptoms, and even die.

Media reports suggest that the elderly and people with chronic medical conditions have the risk of developing severe symptoms. However, we also know that it can prove fatal for the young and healthy, too.

Governments all around the world are advising citizens to take extraordinary precautions, to the almost total halting of social and economic activities, with their own consequences. And yet, politicians including Boris Johnson repeatedly tell us that it is likely that a majority of the whole population would eventually affected.

It is the almost mystic cloud of uncertainty surrounding COVID-19 that is making an adjustment to the disease so difficult. We would like to live sensibly, but it is not at all clear what being sensible entails in this case. That's the conundrum of the COVID-19 lottery.

Why officials find it hard to postpone the Tokyo Olympics.

So the torch relay is soon to start in Japan in the run-up to the Tokyo Olympics. However, as everybody is keenly aware, the atmosphere surrounding this sports event is dire, to say the least.

There are several elements why the officials in the organizing committee of Tokyo Olympics (most of them senior men, although the Mayor of Tokyo is a woman) are reluctant to admit that a postponement is now necessary.

One, the Japanese love the Olympics, perhaps much more than the average citizens in other parts of the world. The last Tokyo Olympics in 1964 coincided with the happy memories of the rapidly growing Japan after the turmoils of the second world war. That established a favourable associative memory nationwide.

Second, for many people Tokyo Olympics 2020 was the symbol of hope for a way out of the stagnant economy in recent years, sometimes referred to as the "lost decade(s)" in Japanese history. It was hoped that the economic impact of the Olympics and the waves of tourists from all over the world would provide the much-needed stimulus package for the ailing economy.

Three, there is a tendency in the Japanese culture that once something is started, there is a great momentum to pursue it to the end. Although this mindset has its merits, it can also backfire. It is increasingly doubtful whether the obstinacy to carry on with the preparations for the Olympics would turn out to be sensible.

All these parameters provide a potentially toxic cocktail of denial, disbelief, and wishful thinking in those involved in the Tokyo Olympics, especially among the senior officials, who cling to the dwindling possibility of the games going ahead with the problems of COVID-19 somehow miraculously solved.

Feelings in Japan about the postponement of Tokyo Olympics

The enigma of the subdued coronavirus outbreak in Japan.

The coronavirus outbreak has entered Japan some time ago, but as of today, there is a strange and almost eerie atmosphere of calm in the nation. There are reports of new infections and casualties almost every day in the media, but the government's response has been mild and unfocused, a far cry from the stringent and even draconian measures taken by many countries. In and around Tokyo, the trains are running as usual, and bars and restaurants are open, although the number of customers have noticeably dwindled.

The enigma is that despite the lukewarm measures taken by the Japanese central and local governments, the coronavirus outbreak has been restrained so far in Japan. Some people argue that this is perhaps due to the lack of infection tests. Conspiracy theories abound, pointing out that the government is trying to keep the infection and death figures low in order to go ahead with the Tokyo Olympics. This is unlikely to be the case, as the number of severely ill or dead from the disease does seem to be low, figures hard to suppress given the openness of the medical sector in this country.

So why is the coronavirus outbreak subdued in Japan? Some point out that the Japanese are incredibly clean people, washing their hands before eating food well before this outbreak. Others say that the obsession to wear masks even when there are no symptoms helped. Yet others suggest that the Japanese shyness towards bodily contacts such as handshake, hugging, and kissing in social life is a factor in suppressing the coronavirus spread.

In any case, there is an atmosphere of unreality and incredulousness in Japan right now, as the news outlets report tragic and urgent situations in other parts of the world. Life in Tokyo is certainly not as usual, but not so different from the norm. There is a hidden undertone of suspension in the Japanese psyche now. Is the Japanese government doing enough? Can we really go through the crisis with THIS level of protective measures?  Nobody knows the answer.

Related video: Enigma of the apparent low infection rate of coronavirus in Japan

I love cup noodles, but the problem is, well, you know it, you cannot claim it to be super healthy to indulge in the joy of eating a bowlful.

So one of the tricks I use is to buy a cup noodle in a convenience store (which is ubiquitous all over Japan) together with salad. Then, I put the vegetables into the cup noodle, thus making a healthier (and actually tastier) serving of food for my soul to devour and enjoy.

To whomever who is fortunate enough to spend at least a few days in Japan, I heartily recommend this life hack of combining one of the most celebrated fast food in the world with a health-conscious addition of the greens.

(By the way, needless to say, I have been using the term "cup noodle" as a general term, not referring to a specific merchandise!) 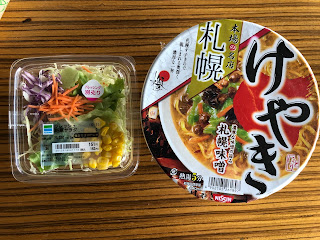 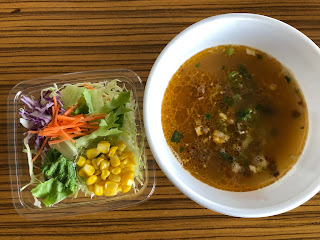 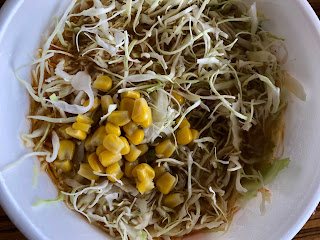