I think The Carpenters was the first pop singer group that captured my imagination when I was a kid. I guess I was about 10.

"Top of the world", "Yesterday once more", "Close to you", "Please Mr. Postman", and other great songs from the duo gripped my heart, although at that age I did not understand the English lyrics very much.

I fell in love with the voice of Karen Carpenter. The vocal qualia is a given gift. The particular form and strength, dynamics of Karen's vocal chord must have produced the sensuous qualia that my consciousness receives when she sings.

20 years passed, and I was about 30, when I went to a Karaoke room with my best friend Yoshi Tamori (mathematical whiz kid).

I discovered that Yoshi liked the Carpenters songs, too. To my utter bewilderment, when he sang, his voice sounded a bit similar to Karen's. It was a shock discovery. Karen and Yoshi look so different. And Yoshi is a man. Karen was so delicate and thin. Yoshi is, ....well.....

I have kept the enlightenment by this mysterious coincidence as a secret, and have not told anybody, until today that is.

Now Yoshi has something to boast apart from incredible rose origami..... 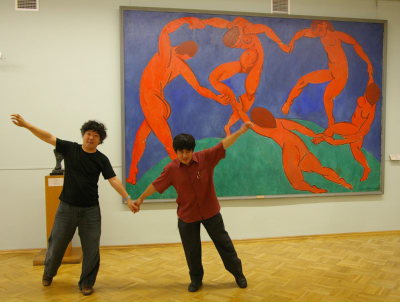 Myself (left) and Yoshi Tamori at the Hermitage Museum, St. Petersburg, Russia.
Posted by Ken Mogi at 8:40 AM 7 comments:

I and Ms. Sumiyoshi Miki had a conversation with the manga artist Takehiko Inoue for "The Professionals" program broadcast by NHK. The conversation, together with the documentary films, will be broadcast on the 15th September on NHK general.

Mr. Inoue stuck me as a fundamentally honest person. Mr. Inoue said that his works are in a sense mirrors which reflect his true self. He said that one needs to get free from self-delusions and pretensions, in order to reach the true roots within oneself. Once the root of one's spirit is reached, one finds there what is universally human. This self-digging of the soul is a necessary process for the creation of works which are at once high quality and popular.

One needs to be courageous to come face to face with the true root of the self. Self-delusion is such a sweet poison. But the courage finally is rewarding.

I did not even dream

When I am hungry at night, having been unable to take a respectable bite, at the bed time I am faced with a dilemma. Should I eat something or not? When I succumb to the temptation, I would perhaps put the kettle and make some hot water. I would make one of the instant noodles in the cup, and eat it, with a feeling of guilt on my heart. You are not supposed to eat miso soup noodles in the small hours.

Last night, I had that kind of temptation again, but resisted it. It is not that I had an iron will. I was simply too exhausted.

The feeling of exhaustion translated itself into a need to watch one of my favorite British comedies, Father Ted. I did not last even for a few minutes.

When I awoke this morning, I found the DVD having gone to the very end, with the computer making the characteristic fan sound when it has been on for a long time. It was heat that accompanied my finally sweet sleep. I did not even dream.
Posted by Ken Mogi at 7:44 AM 5 comments:

When I was a kid, I used to love to eat white thin noodles ( Somen ) in the summer.

After being boiled, the noodles would be put into ice cold water. You pick the noodles with hashi (chopsticks) and put it into a soy source flavored soup.

It used to be that there would be a few colored noodles in one "bouquet" of somen noodles. The noodles would be normally white, but a few would be colored in yellow, red, blue, and green.

Although exactly the same in taste, the colored noodles fascinated me as a kid. When my mother brought a bowl of noodles, I would dash to pick the colored ones, in competition with my sister, who was 2 years younger than me. The height of our competition for the colors was when I was 6 and she was 4. I remember we had several bitter fights, and my mother would complain "what's all this fuss about colors? They are all the same in taste."

We actually knew that.

As years passed, I somehow grew out of the colors. When I was about 9, I remember vividly saying to my sister "you can have all the colored noodles you want." It was a sign of my maturity. It was also an end of my childhood enchantment by the colors.
Posted by Ken Mogi at 8:12 AM 8 comments:

My native and resident country, Japan is a nation of islands. Going abroad used to and remains to have a special connotation for its inhabitants.

I went abroad for the first time when I was 15. I still remember the shock as the airplane descended to Vancouver international airport. I happened to observe what later turned out to be quite an ordinary residential area by Canadian standards. However, at that time, the spacious greens in which the houses, some of them with pools in the backyard, seemed to be a scene from another planet.

Now, when I travel out of and into the Tokyo International airport, the shocks still persist more or less, albeit in a diminished manner. On the other hand, I seem to begin to discern a more universal and global pattern common to all world regions, no matter how different the languages and habitats might appear on the surface.

As time passes, I seem to be more concerned on what is universally human.

I never took a serious interest in nationalism, or in people who advocate it.

As the shock of differences fade away, the light of universality emerges. And we follow the light.
Posted by Ken Mogi at 9:15 AM 4 comments:

Solace to the soul of a nation

Parsifal is the final opera of Richard Wagner. It seems to be a fitting end to the career of a composer who pursued the theme of Erlosung durch Liebe (redemption through love) for life.

It was fitting that my first experience of the Bayreuth festival came to a conclusion on Saturday with the performance of Parsifal, conducted by Daniele Gatti and directed by Stefan Herheim (Bayreuth Festspiele, 15th August 2009).

During the Vorspiel (overture), the stage curtain was already open, and we saw a woman with long blonde hair dressed in white lying on a bed. Apparently she is in death agony. In Sehnsucht (yearning), she calls for her boy child. The boy, not understanding the nature of maternal emotion, refuses to be hugged by her and goes away into the garden with a bough in his hand.

Soon after the boy left, the mother dies. The doctor declares the death, and puts a sheet over her body. They leave the room, and the dead woman sinks into the bed and disappears.

When the boy returns, the room is empty. He looks at the bed where his mother has been lying. Still not comprehending what has been going on, he faces with unconscious misgivings a platform in the front of the stage which turns out to be an alter en effect throughout the performance. He lays bricks there, apparently forming a wall. However, the wall remains incomplete and in translation.

This brief description of what happens, in outline, during the course of the overture would do justice, I think, to the multitudes of possibilities that a stage director can put into a contemporary Wagner performance.

It was a production with a heavy resonance with the sometimes tragic modern history of Germany, with vivid and unforgettable images. The fact that an opera can bring solace to the soul of a nation by facing its history without any self deception is once again a testimony of the forces of a great piece of art.

Image from Parsifal directed by Stefan Herheim from Wagneropra.net
Posted by Ken Mogi at 11:03 AM 4 comments:

In order for a work of performing art to be maintained in a living condition, it needs to be refreshed in the styles of times. The concerns close to people's heart, the joys and fears of the common man change with the passage of eras. A presentation of a work, no matter how vivid and appropriate within the context of a particular time, tends to fade away in relevance in the face of a new period.

These were the thoughts invoked as I left the theatre after attending the performance of Die Meistersinger von Nürnberg (Bayreuth Festspiele, on 14th August 2009), conducted by Sebastian Weigle and directed by Katharina Wagner.

Katharina Wagner's Meistersinger premiered in July 2007. It was heavily booed. The fact that people boo certain productions is a testimony that opera is taken very seriously. The production of Der Ring der Nibelungen directed by Patrice Chéreau and conducted by Pierre Boulez, for example, was booed on the first night to such an extent that it became a scandal. The perception of the audience can then go through a dramatic transfiguration. In its final staging in 1980, on the night of Götterdämmerung, Chéreau and Boulez's Ring received 101 curtain calls which lasted for 90 minutes.

It remains to be seen how Katharina's production will be finally received. It is certainly a very interesting production. It is, which is important more than anything else, also very courageous. The fact that the great granddaughter of Richard Wagner is bold enough to try this brand new philosophy of staging is reassuring for the future of the Bayreuth festival.

Katharina herself says thus. “Being booed belongs to the job description of a director.” ( New York times, July 31, 2007)

The progress of the human spirit is a very complex and dynamic process. Booings and bravos are the fuels that propel its procession.