Companies to my sweet sleep

I am in Nikko, where a series of temples were build in the early 1600s for the first Shogun of the Tokugawa government, Ieyasu. Now it is a UNESCO world heritage site. I am to have a joint public lecture today with a respected Buddhist priest, Mr. Yusai Sakai.

When I arrived at the hotel, it was already pitch dark. I had a nice dinner with editors from Asahi Shimbun newspaper. After parting, I went to sleep after watching for a while the second debate in the U.K. general election.

When I woke up this morning, I went to the window to take in some fresh air. To my surprise, there was this very attractive river just outside the hotel. A beautiful mountain was behind the river, and together, the water flow and the chunk of rocks made a wonderful scene.

I was taken unexpected, and thought of the long night during which I was not aware of those things. In the darkness of night, it was impossible to sense their existence. To think that the river and mountain have been companies to my sweet sleep all along gave me a surge of happy realization.
Posted by Ken Mogi at 6:50 AM 2 comments:

When I arrived in the U.K. to do two years' research in Cambridge, the first thing to do was to find a home.

I looked around, and found a cozy place on Missleton Court, in the southern suburb. The owner was a professor at University of Cambridge. We shook hands as we agreed on the rent.

There was a small wooden chair in the house. The professor pointed to the chair, and said, "Well, this chair has a sentimental value for me. My father made it for me when I was a child."

Maybe it was the way the professor said these words to me. Maybe it was the particular circumstances. I had just arrived in U.K., preparing myself for days in a foreign soil. The words "sentimental value" associated with the parental love probably struck the chord in my heart.

How strange is the human memory system! To this day, I remember vividly how the professor said it, on the ground floor room, as the sun came through the small green house attached to the side, in which I used to drink beer in the evening, as I looked up at the swallows crisscrossing the sky.
Posted by Ken Mogi at 7:44 AM 3 comments:

When and if Mount Fuji erupts.

I am still recovering from my experience of being stranded in Europe for 4 days due to the volcanic eruption. I could have enjoyed it as an unexpected vacation, but I simply had to come back to Tokyo in order to fulfill some important assignments. Controversies are raging whether the tight airspace controls have been a case of overreacting. One thing is certain. It has exposed the vulnerability of an island economy.

England was harder struck compared to the continental Europe not only because of its proximity to Iceland, but also due to its geological isolation. The U.K. is an island nation. The logistics depend much on the air, especially in the shorter time scale. In the continent people are able to use other means of transportation, albeit taking much longer time. Something is better than nothing. An island nation, when deprived of air, can go into a state of despair. Much thanks thus are due to the channel tunnel, without the existence of which the U.K. would have been more severely cut.

When I think the state surrounding my own nation, the island vulnerability is clear. If Japan loses its airspace, it would be virtually cut off from the outside world, especially in the shorter time scale.

The largest volcano, Mt. Fuji, has last erupted in 1707. Theoretically, it can erupt at any time again, letting out a huge amount of ash like the Icelandic volcano did this time. That could well lead to the loss of airspace in metropolitan Tokyo, judging from the events in the past days.

The nation clearly needs a contingency plan in case eruptions (not necessarily limited to Mt. Fuji) happen. Meanwhile, while I return to normal from the ashes, I brush up my cognitive processes so that my world model would better reflect the inherent unpredictability of the world that we inhabit.

You never know what tomorrow will bring.

Mount Fuji as depicted in a famous Ukiyoe print by Hokusai.
Posted by Ken Mogi at 8:30 AM 4 comments:

I don't know what happened to the serious man.

A great sigh of relief was emitted from my mouth, or rather, my soul, as I finally made it onto the Lufthansa flight to Tokyo.

I was sitting at a window seat. I was looking for any signs of irregularities outside, but noticed only a tinge of the air quite widespread, which looked like dust from some perspectives. It was hard to say if that was the effect of the volcanic ashes, though.

At first I had this theoretical fear that something might go amiss with the engine (which were quite visible from my seat, bad thing or good thing?). However, as I took my first glass of wine things started to become fuzzy. Before I knew it, the airplane was cruising over Russia, well out of the danger zone. Maybe alcohol is a great tranquilizer preventing the passengers from unduly panicking.

Probably I was in a mood for an entertainment spree after these days of trials. Surely I could be excused if I did not work. I watched three films in a row.

The first was "All about Steve", which traces the stalking activities of a narcotic, but not unattractive crosswords maniac girl.

The second was "The invention of lying", starring the "The Office" Star Ricky Gervais.

The last one was "A Serious man". I started watching the film assuming that it was another light-hearted comedy, but sensed something was different in the first few minutes. I looked at the film description again, and found that it was actually directed by Joel and Ethan Coen!

I found the film quite interesting, and wished to watch it to the end, but as the airplane approached Tokyo Narita airport the entertainment system was abruptly terminated. So I don't know what happened to the serious man.
Posted by Ken Mogi at 10:55 AM 7 comments:

Today the Lufthansa started operating its long distance flights, despite the still existing problem of the volcanic ash.
I therefore would hurry to Munich airport in a few minutes,

in a hope that I would be able to secure a seat in the planned Tokyo flight.

Fingers crossed. There is a silver lining to any desperate situation, and that is hope.
Posted by Ken Mogi at 4:33 PM 4 comments:

I am still stuck in Munich due to the distant echo of the vigorous activities of the volcano Eyjafjallajökull. Last evening, in an effort to indulge myself a bit and boost up the morale, I went to a Japanese restaurant in front of the Hofbrauhaus. I had a Sushi plate to the accompaniment of miso soup, occasionally sipping sake. Eating my favorite delicacies did not make me homesick or anything, but surely improved the overall mood.

This morning, I am still struggling to find a way home. The Vienna airport has opened. The Germany transport minister is apparently taking a conservative stance about it, and is being criticized by airliners such as Lufthansa. For a few hours I considered the possibility of moving to Vienna by train, but later found that it was not plausible due to several circumstances including difficulty of reservation, predicted ash shift, and the state of ongoing cancellations for the long haul flights.

Thus, the best hope apart from the opening of the Munich airport seems to be the flight from Rome. I could secure an Alitalia flight to Tokyo leaving on the 22nd. I have a train ticket to Rome on the 20th, and intend to try to change the date to the 21st at the Hauptbahnhof today, thus preserving the option of trying to fly out of Munich for one additional day.

Meanwhile, staying in this state of forced procrastination seems to be directing my psyche in an increasingly eccentric direction. I have been suspecting that it is in me for some time, but now I am quite sure.

My madness seems to be as certain as the blue sky over Munich.

Here's the snapshot of me standing next to my all time favorite mad hero, King Ludwig II of Bavaria. 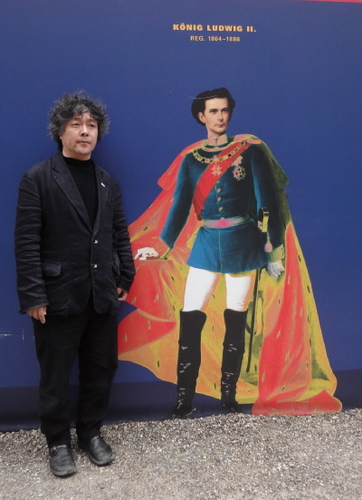 My much respected fellow of the lunar clan. King Ludwig II of Bavaria.
Posted by Ken Mogi at 5:48 PM 4 comments:

Operating through the ashes

In the morning I went to the airport, to make changes to my reservation. As the telephone lines are always busy, one needs to go to the airport counter physically and make necessary arrangements.

After I finished the ordeal, I went back to the city center. I love Munich. I have visited the city many times. I know some of the backstreets by heart. And yet I never expected to wander around in my beloved city in a spirit of exile.

I went to the National Theatre, in a ritual that must be done every time I come to Munich. I then meandered through the narrow paths. The Hofbrauhaus was too full of people, so I sought a quieter bierhaus instead. Prior to this "spazierengehen" in the evening, I had already learned that the Tokyo flight I meant to take had been cancelled. So I needed to stay in Munich for at least one more day, unless I started searching for other routes.

The decisions are not so simple. The distribution of the volcanic ashes are unpredictable. At present Rome and Madrid are open, but one does not know if the wind would not change. It is reported that Lufthansa started test flights to see the plausibility of operating through the ashes. That adds new elements of uncertainty to be considered, albeit in the direction of hope.

There is a heavy cap on the logistics. Since one needs to move on land because of the blocked airspace, once one makes the critical decision to try Rome or Madrid there is practically no turning back. Number of additionl uncertainties make the decision extremely difficult. Thus the procrastination.

There is one consolation, though. Despite all this, the city of Munich still allures me with its charm. Maybe I will stand in front of the New Town Hall (Neues Rathaus) in the evening breeze and forget all about it. 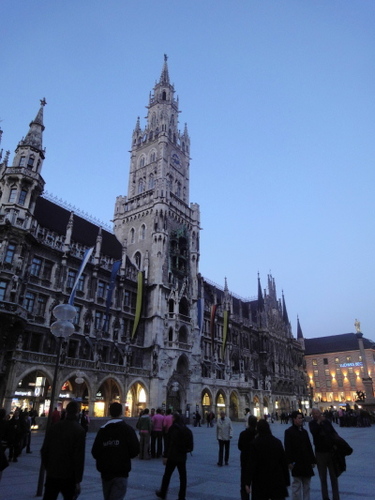 The famous New Town Hall in Munich. Standing aloof from the ashes.
Posted by Ken Mogi at 4:54 PM 3 comments: