Place of the highest concentration of uncertainty.

I went to the Keio University Hiyoshi campus for our "Brain Club" meeting and lecture giving.

It is always so interesting to go to a University campus. There are people with lots of uncertainties in life, who wander on the earth, with their faces full of expectations and anxieties. The sheer ambience of these immature souls are such a joy to observe.
In a society in which on graduation many people search jobs expecting a life employment, the university campus continues to be the place of the highest concentration of uncertainty. Once in the society, there are categorically less uncertainty. Which is a good thing in terms of security, but is also suffocating for the soul.

My personal wish is that the Japanese society in general would become more of a University type place of uncertainty rather than the present system built on an increasingly unsustainable security. After all, uncertainties in life cannot be avoided, and the false presumption of a fictitious security rampant in society does more harm than good to its members.
Posted by Ken Mogi at 8:34 AM 4 comments:

Penrose does not usually look up what people have already done.

Greg left a very interesting comment on my last entry "The secret is to hide your sources".

Greg: It sounds reasonable that new discoveries emerge from sources that we may not be able to trace directly. However, there appears to be some tension with this idea and the underlying philosophy for academic writing where authors are expected to move from known scholarship to new inferences and discoveries. There is the impression that scholarship moves incrementally from the known to unmask the unknown through sound reasoning, observation, and experimentation. Perhaps, this is an ideal as well and that what happens is something between the two ideas.

Yes, indeed! Thank you for making this good point, Greg!

Academic paper writing is all about continuity and incremental knowledge building. Therefore, when you write the paper, it is necessary to cite all the relevant references, and state clearly what new things your present work is bringing into the field.
(Having said that, it is a fact that the Einstein paper in 1905 did not cite a single paper. I wonder if that was an acceptable mode of writing in that era.)

I remember a chat that I had with Sir Roger Penrose some years ago in Oxford. When I asked where his ideas came from, Penrose answered that it came from nowhere. Penrose does not usually look up what people have already done. He just does whatever he likes, and checks only afterwards whether any others have done similar things before. The order of things is actually opposite to what is normal in academic paper writing. I suspect that it is the case with quite a few people, especially those with originality.
Posted by Ken Mogi at 8:01 AM 2 comments:

The secret is to hide your sources.

Albert Einstein once remarked to the effect that the secret of creativity is to hide your sources.

Here, the great physicist is showing again his great intuition about the psychology of creativity. Mysterious though the workings of the brain may appear to us at present, one thing is clear. Nothing comes from nothing. When one has a moment of inspiration, one might have the feeling that the new idea came out of the air, without a trace of precursors and origins. And yet, the breakthrough is in fact the result of a continuous experiment of associations and links within the cortical network, where various information obtained through experience and thinking is thrown into the "crucible" and fused.

In reality, when there is a new idea, say X, popping into the mind, there should be an unspecified set of information, say A, B, C, D, ....., that amounted to the forging of X. The intriguing fact is that we are not always, and indeed most of the time not aware of the sources A, B, C, D, ...... Hence the rather surprising nature of the moment of insipiration.

Thus, as Albert Einstein said, the secret of creativity is to be found in a process where the sources are hidden, and the human brain is very capable of such a process.
Posted by Ken Mogi at 6:16 PM 2 comments:

While in Ann Arbor, there was one thing that I would very much like to see.

ENIAC stands for Electronic Numerical Integrator And Computer, and was the world's first electronic computer. ENIAC was constructed in University of Pennsylvania by John Mauchly and J. Presper Eckert, and was completed in 1946. It was then operational until 1955. ENIAC conducted 5000 cycles of operations per second.

Four of the original panels are now displayed in the entrance hall of Computer Science and Engineering Building at 2260 Hayward, University of Michigan, Ann Arbor.

Standing in front of the legendary machine filled me with awe and inspiration. To think that the evolution of modern computers started here, all the way to the wondrous machines that we so casually use today, including the one I use to type these words, infuses one with respect for the pioneers.

Here's some photos of the legendary machine. Thanks to University of Michigan for preserving and displaying this significant bit of history. 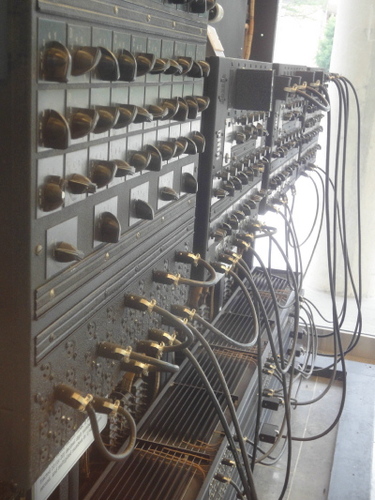 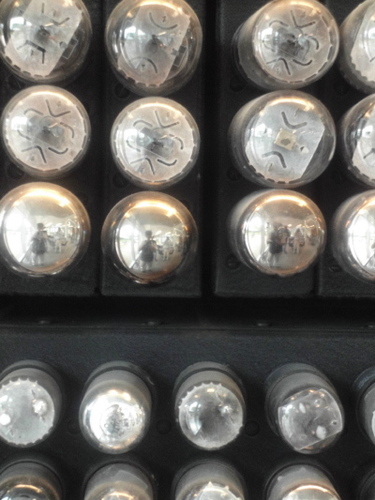 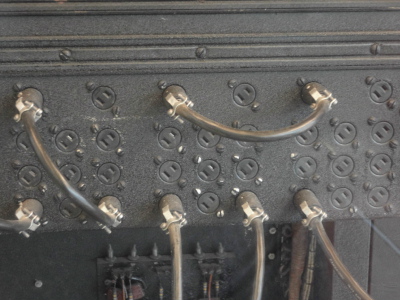 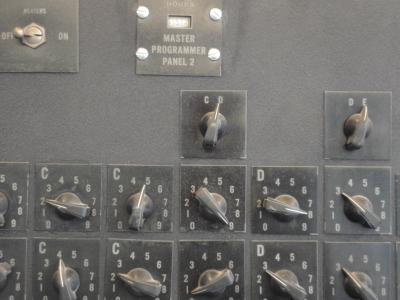 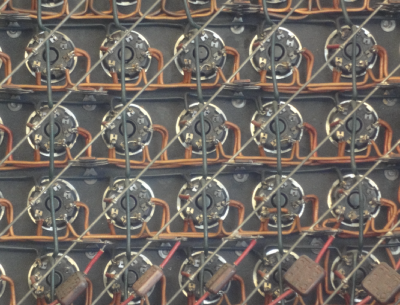 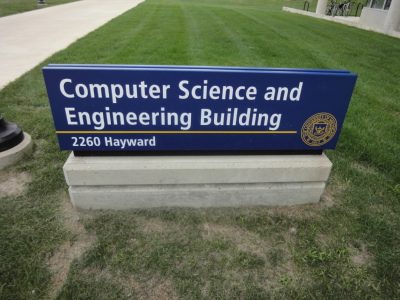 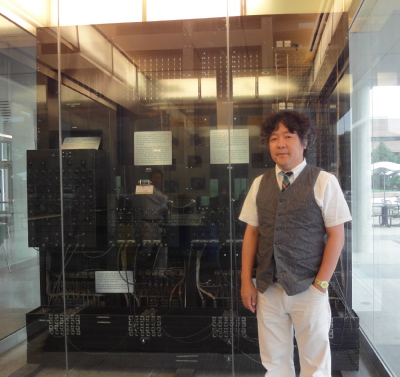 My travel in the United States continues.

A 30 minutes drive from the Detroit airport brought me to Ann Arbor. As the car approached the academic city, memories swelled in my heart.

In the summer of 1986, I participated the 38th Japan America Student Conference. This conference was my first exposure to the American culture. As part of the itinerary, we visited the University of Michigan at Ann Arbor.

We stayed at the student dorm on campus, and talked late into the night. As the conference was finished for the day in the evening, we strolled into the streets. As I recall, I realize that was one of the prime times of my life.

At that time, I was seriously considering of moving out of Japan and going to the United States. I don't know what made me walk away from that adventure eventually. Possibly, it was a fear of losing my own roots.

At that time, as is the case today, America was a huge crucible in which things got mixed and then melted and fused. I think I was unconsciously afraid of being lost in a ocean of constantly moving trends of miscellaneous unknowns.

At the time of my visit to Ann Arbor, I did not know Yasujiro Ozu, had not visited the Ise Shrine, and had not rediscovered Hideo Kobayashi. Perhaps I was not confident enough in my own cultural tradition to set out to the vast of ocean of contingencies in the United States.

Shortly after the conference, I made a decision to go to the graduate school in Tokyo. My first long-term residence in a foreign soil was then to be the postdoctoral years in Cambridge University, U.K. In this era, my heart was rather remote from the things U.S. To this day, I do not know if I made the correct decision.

Once in the city, I suddenly remembered that there was an Ice Cream place called Steve's. Nostalgia made me curious if that was still there. Memories of the conference in 1986. The walks we took to the Steve's Ice Cream, smiles of my friends, arguing which flavor was best, making jokes, bursting laughter, patting on the shoulder, tasting each other's, exchanging remarks, outreaching of cultures...

When I checked the web in the hotel room, I learned that the precious Steve's is gone. An entry from "Ann Arbor's lost eateries" reads:


So a gem in my past is no more. Gone too is the young I who aspired to be a global citizen, not knowing exactly why or, more importantly, how.

Time flows and flew, and here I am in Ann Arbor again, looking at the phenomenon which is the United States with renewed vigor and bits of educated bewilderments.
Posted by Ken Mogi at 11:18 PM 3 comments:

I arrived in Columbus, Ohio, and moved to Athens, Ohio, on the road.

We dropped by a roadside restaurant. I got into talking with John. John majored in film studies at University. He said he saw many works by the Japanese masters, Kurosawa, Ozu, and Mizoguchi.

This morning, as I greeted him on the hotel corridor, John yelled to me "Ohio!" I asked him if he meant "good morning" in Japanese (the Japanese word for good morning, "Ohayo", is very similar in pronunciation to "Ohio", and saying "Ohio" in the sense of "good morning" is a relatively well-known bi-cultural joke). John said "yes". "There was a Japanese movie with that title".

"Oh, you mean Ozu?" I said. "Ozu has a lovely piece with that title". "Well, I don't remember exactly," John said.

Back in the room, I started to muse that there might probably be two roads to the universal from the local. One is the internet way, and another is the Ozu way. Before I have time to type down the thoughts however, I realize that it is now time for me to leave to face up to today's missions.
Posted by Ken Mogi at 9:02 PM 2 comments:

The statistics indicate that my entry into the journal was rather random and sparse for the first 5 years.
Then, on 6th June 2009, I made a resolution.

I thought that I would keep the diary continuously, without any breaks, from that day.

Today, The Qualia Journal celebrates one year of continuous entry. Some of the entries have been short, some of them fairly extensive, some written in my native town of Tokyo, some abroad, most of them typed down in the morning (local time), some on the airplane, but here, it seems that I have successfully kept my resolution.

My deep felt thanks for all readers of this humble blog. In particular, I am grateful for those who have left a comment on my entry. Some of them have had the generosity to come back repeatedly to my blog, and left several comments. I enjoy reading the comments, and have learned a lot from them.

So here I make yet another resolution, to keep The Qualia Journal every day indefinitely. May your days be happy, and let us hope that this tiny celebration of the emerging global culture might be sustained in the years to come.
Posted by Ken Mogi at 9:49 PM 20 comments: