The world at large is never to know.

---------
Yoshiro moved closer to Sanshiro. "How do you like 'Woman in Forest?'"
"The title is no good."
"What should it be, then?"
Sanshiro did not answer him, but to himself he muttered over and over, "Stray sheep. Stray sheep."

So finally, it was about a painting. To the casual onlooker it is just a painting of a woman with a fan, posing in the forest. It is nothing but the "Woman in the Forest".

To Sanshio alone, the painting is the focal point of his never-to-return youthful wanderings. The encounter with the enigmatic woman, the romance, the agitations, dreams, heartbreaks, and the eventual catastrophe in the form of the marriage of the woman to a total stranger.

The novel starts with the encounter of Sanshiro with Mineko by the pond, and ends with the fulfillment of the creation of the painting in the final scene. The painting hides many secrets and tears under its shining surface.

The intimacy is private, and the world at large is never to know. Nobody is to hear Sanshiro's sighs. Then the novelist comes to the rescue.

The Sanshiro pond in the University of Tokyo Hongo campus, named after the famous novel.
It was by this pond that Sanshiro met Mineko.
Posted by Ken Mogi at 8:18 AM 2 comments:

Lights, darkness and all.

Drank with my best friends until late at night. Had an early morning, but simply had to stay. There are nights like this when you simply wanted to hang out with your chums.

Thought of leaving in-between, but stayed until the last call was made. Walked out into the Shibuya street. Took a group photo.
Memories of forgone times. Tears, smiles, and visions for the future.

Writing this journal on the way back home. Embracing life. Lights, darkness and all.
Posted by Ken Mogi at 8:00 AM 4 comments:

During the course of my life, I sometimes search for dissonance. Consonances are surely beautiful. To drink a good white wine in a sunlit room on a late spring afternoon is an epitome of consonance. On the other hand, disagreeing can be also glorify the soul, whether it is with people, food, music, or painting.

Sometimes, the dissonant experience visits us in a subtle form. take the paintings by Francis Bacon (1909-1992), for example. His paintings makes the onlooker uneasy, as if something is wrong with the painting, or the world, or, more seriously, with ourselves. It is as if elements of rage of disagreement is diluted, and sprinkled all over the place, so that the dissonance in distribution becomes something akin to love. Self Portrait by Francis Bacon.
Posted by Ken Mogi at 7:32 AM 2 comments:

Things in the periphery

So the knack is to see the scenery as a whole, and wait for something to "pop out" from the unconscious into your attention.
What we see is massively parallel in nature. Things are captured in the visual awareness at the same time. Brain's resources as regards attention, perception, cognition, memory, action cannot be allocated to all that are visible at one time. So you need to distribute your concerns diffusely.

How to come to terms with the overflow of the periphery is one of the most essential things in life.

Look at a painting like "Children's Games" by Peter Bruegel the Elder.
Here's a larger file. Notice how things are visible in a massively parallel way. And then let little things tickle you. 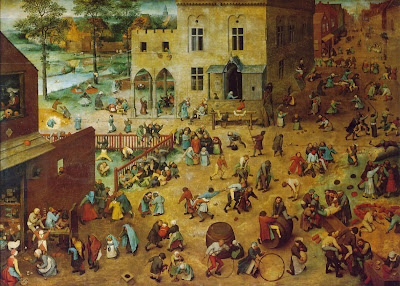 Take the starry night by Vincent van Gogh, for example. This oil painting, painted in 1889, strikes one with a vivid impression. However, Gogh himself has nothing to say about it.

Nothing to say. Creators must remain silent, after the work is finished. If the work is powerful enough, it will speak for the self. The urge to add some words to the self-standing work is a testimony of its feebleness. Weakness requires complements. Beauty and power are self-sustaining.

If you are a creator, you should not go moping about, concerning your work. You may want to do it privately, among your close friends, but not publicly.

This universe, which we inhabit, is a beautiful and powerful place, with lots of secrets and treasures, a small portion of which we humans have uncovered. It is a self-sustaining work.

That is probably why God remains silent.

The Starry Night. By Vincent van Gogh
Posted by Ken Mogi at 7:27 AM 7 comments:

When you watch classic films shot in Japan's Showa era like Akira Kurosawa's "High and Low", you are surprised by the swift and vivid movements of the actors.

The actions are full of energy, with surprising twists, and accompanied by the very strong feeling of something living here and now.

Although the gist of the impressions is surely due to the mastery of the great director, I think it has a lot to do with the Zeitgeist, too. The film was released in 1963. At that time, 17 years after the end of second world war, Japanese economy was rapidly growing, rather like today's China. People were naturally highly motivated, with a belief that tomorrow will bring something exciting, something unprecedented. Such a mindset shows in the movements.

Civilization, when it develops, envelops the human beings with lots of protections. We become "vetted", and lose our wilderness. With the advent of the internet, we are all in a danger of constant vetting, and that is reflected in our daily movements.

To watch a film like "High and Low" is tantamount to having a glimpse into the time in which we were rather like "wild animals", roaming in the world at large, driven by our own instincts, oblivious of the glass ceiling of civilization which actually exists in any given era.

Cover of Akira Kurosawa's "High and Low" DVD.
Posted by Ken Mogi at 8:18 AM 2 comments:

"I am happy. I will live long"

In Yasujiro Ozu's film "Early Summer" ("Bakushu"), there is a surprise scene where Noriko (played by Setsuko Hara) agrees to marry the widower Kenkichi (played by Hiroshi Nihonyangagi). Kenkichi's mother, Tami (played by Haruko Sugimura), on a sudden impulse says that she had been wishing that somebody like Noriko would marry the lonely man. The unexpected proposal, and Noriko's equally unanticipated "yes", is a dramatic turning point in the tranquility of the beautiful cinema.
Upon hearing Noriko's consent, Tami goes on to say "Thank you very much. I am happy. I will live long." Tami has been worried about her son's future, and her own welfare, but now that the key arrangement has been made, she can rest assured that her remaining days, the last stretch of life, would be happy.

Seeing my own mother for the New year, I remembered the poignant scene from the great master. And I wished that my mother would be able to say "I am happy. I will live long." in the coming years.

Life is full of ups and downs, and I can take my share of the upheavals, as I am determined to be strong in heart, but I would like my aging parents to be happy, without conditions.

The immortal "proposal" scene from "Early Summer."
Posted by Ken Mogi at 7:52 AM 3 comments: