The American way of being explicit

The American way of communication has been said to be unique to that particular nation. When I go to the States, people say hello to me on the lift, waiters state their names aloud when I sit in a restaurant. In meetings, people articulate their background with lengthy words.

In other societies, it is usually considered a bad taste to be so explicit. In Japan, people rely on an implicit understanding of the social norms and aesthetics, which are seldom mentioned. In the United Kingdom, where I did my postdoc for two years, the American way of stating everything was kind of looked down. Some people thought that it was a manifestation of a lack of wisdom.

But things are changing.

The reason why the American mannerism developed over the years, of course, is to be found in the social construction of the nation. The American society is made up of people from various backgrounds. No matter what your ancestor's nationality was, whether you are an immigrant or a native-born citizen, you are a "typical" American. With such a variety of backgrounds and cultural traits, it became necessary to state the very assumptions and paradigms that frame your actions and value systems in a explicit way. Otherwise people don't understand you.

With the advent of internet, things are changing. As more and more people start to interact within the small-world network, crossing over borders and less frequently language barriers to my regret, it is becoming necessary to state your background in a more explicit way.

In the cyberspace, the situation is much more "American" than the physical nation itself, in terms of the heterogeneity of people surfing the web. Maybe we should all start stating our names aloud and take pains in explaining everything that is tacitly assumed in the respective home society. We should, in a sense, all emulate the American way of being explicit. Otherwise we would probably miss the great revolution that is happening here and now in the cyberspace.
Posted by Ken Mogi at 8:45 AM 1 comment:

"Mono no aware" (the pathos of things) is an important concept in understanding Japanese literature and way of seeing the world in general. It is an awareness of the vulnerabilities of life, the ever-changing faces of things, the non-permanence of human existence. It was famously employed as a critical tool by Motoori Norinaga (1730-1801), the founder of Kokugaku (Japanology) in the Edo period.

Those who possess a sense of "mono no aware" are sensitive to the sufferings of the weak and underprivileged, as they know that they might fall into these misfortunes themselves. They are aware that nothing is permanent, love, social structure, human relationships, not to mention politics. They do not therefore take a "no-nonsense" approach in coming to terms with conditions of the outcasts and the estranged. They are full of compassion and commiseration.

In the Japanese society, there has always been an implicit conflict between the bureaucratic and hard-nosed and those with a soft heart for the "mono no aware". In the Heian period (749 to 1185), the ruling class prided themselves on having a feeling for "mono no aware", as exemplified in the beautiful story of Genji. The Japanese history had seen some periods where people insensitive to their own and others' vulnerabilities unfortunately found central positions in government.

I myself would like to live fully immersed in "mono no aware". I would like to expose myself to the vulnerabilities of life, both within and without, and constantly find a new self. It is the only way to grow spiritually.

Those were the thoughts as I walked through the forest of the Meiji Shrine in the heart of Tokyo, on my way to the NHK broadcast center one recent afternoon, with the sky above being cleared of clouds which brought rain earlier in the morning. 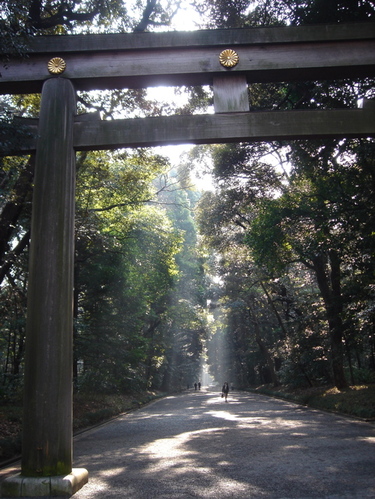 The torii (sacred gate) of the Meiji Shrine. I walk past this gate into the forest behind twice a week on my way to the NHK (Japan Broadcasting Corporation) broadcast center.
Posted by Ken Mogi at 11:00 AM 2 comments:

The present paradigm of neuroeconomics is too narrow in its conceptual setup in order to encompass all that is truly relevant and important in life. It starts from the assumption that the human beings are selfish and then goes on to study various anomalies (e.g. altruism) as something added to the fundamental assumptions. However, after some careful considerations it would appear that the fundamental assumptions themselves are very much restricted for the purpose of accounting for the development and maintenance of the self in the complex world that we find ourselves in.

Let's draw an analogy with the cycles of life here. In order to account for the fact that there are various forms of life on the earth, one needs to "doubt" the stability of existing life-forms and delve straight into the underlying vulnerabilities. If the life forms were not mortal, meeting their respective destinies in the struggle for life, there would not have been any evolution of the species.

The same can be said for the origin of the self. If the self does not "bleed" and "threatened" and even "destroyed" from time to time, it cannot really "evolve" in the course of an individual's life or over generations. "Emergence" originates in "emergency". Fury, envy, enchantment, bewilderment, hate, love, all these emotions that makes life such a complex and colourful experience is nothing more than reflections in one's psyche of the contingent processes that form the self in the interactions with the environment and other agencies.

Game theory, neuroeconomics, all these wonderful theories of the origin of human cognition and behavior are just scratches on the surface of the gigantic mass of mentality out of which our humble every day life is formed.
Posted by Ken Mogi at 8:07 AM No comments:

Two years after the end of the war, my mother passed away. Mother's death affected me very deeply. Compared to this sorrow, the great war, while shaking my flesh physically, did not move my spirit in any discernible way.

A few days after my mother's death, I had a strange experience. My house at that time was situated in the remote parts of the Ougigaya valley, where there was a brook running along the path. It was already twilight. As I went out of the gate, I saw a firefly floating through the air. Fireflies are something common in the region at their season. However, it was the very first sighting that particular year.

The firefly appeared large like I had never seen, the light in the dusk shining prominently. My mother has now become a firefly, the thought suddenly occurred to me. Strolling after the floating light, I could not let myself free from this strange idea any more.

Excerpt from the opening sentences of Hideo Kobayashi's unfinished work "Impressions", in which Kobayashi discussed at length the philosophy of Henri Bergson. The war Kobayashi refers to in the text is the Pacific War (1941-1945).

Polar star in the night sky

When small things tend to let you down in life, it is useful to think of the really wonderful things.

In my case, I remember how wonderful the achievements of Newton and Einstein have been, what a sense of bewilderments the fruits of the strivings of these giants have given to humanity. I also ponder the beautiful moments in the music of Mozart, Beethoven, and Wagner. I remember the poignant depiction of the human condition in Yasujizo Ozu films.

Remembering all these wonderful things gives me a sense of value and goal in life. I would not dare call this perception absolute or Platonic without the modern "small prints". Whatever the nature, the remembrance of these wonderful things serves as the "polar" star in the night sky of my mentality, the immovable and guiding principle in life.

That is not to say that small things in life would go away. These troubles would still torture me from time to time. It is only that I can become immune to some extent, thanks to the smile and joy the remembrance of beautiful things brings to my soul.
Posted by Ken Mogi at 8:34 AM No comments:

On the ecological complexity of novels.

A few years ago, I was giving a joint talk with Masahiko Shimada, the famous Japanese novelist of my own generation, at the Asahi Culture Center in Tokyo. We were discussing the nature of good literary works, and I happened to mention that the repetition of words was not necessarily a bad thing, although abhorred by editors in general. What I was trying to allude to at that time was the importance of repetitions in the spoken language, especially those that accompany dances and other rhythmic actions in daily life. Close to life in its nature, the liberation of repetition could broaden the universe of literal expression, I suggested

Masahiko then said something interesting that set me pondering. He said that any great novel is like a dictionary. To take an example from the Japanese literature, consider Soseki Natsume. The vocabulary that Natsume uses in his novels is quite vast, and it encompasses a large sea of words employed in the written and spoken forms of the Japanese language. A Natsume novel is a "dictionary" in effect structured along a storyline, covering and giving a lively list of virtually all the words that are used in the cosmos of our native tongue.

The discussion with Masahiko at that time prompted a wave of thoughts about the richness that complexity would generate, how it is related to the philosophy of life. In the Amazonian rainforest, it is known that the same species of vegetation thrives far apart from each other, a multitude of different kinds mixing and co-existing within a tightly woven ecological system. In such a system, the lack of repetition of the same element is a hallmark of the richness of complexity. An obvious analogy can be made between ecology and novels.

It is a worthy ambition for anybody interested in linguistic expression to author a "virtual-dictionary" type work of literature. Technical writings in science and mathematics often suffer from monoculture in words, for the very reason that certain expression and phrases needs to be eradicated to ascertain logical coherence. It is then by no accident that in the beloved literature of the world insanity and illogicality must sometimes surface, as these traits are admittedly major members in the universe of human spiritually, calling for appropriate corresponding expressions in the spoken and written language.
Posted by Ken Mogi at 9:48 AM No comments: