The trumpet boy in Salzburg.

I have been visiting Salzburg, Austria, to attend the Quantum Mind
conference organized by a long time friend of mine, Gustav Bernroider of the University of Salzburg. Now I am heading back to Tokyo, lost in translation at Vienna airport.

On the last evening of my short stay in Salzburg, I was tasting my beer in the venerable Cafe Tomaselli. A small boy of about 6 or 7 years old was playing the trumpet. He was adequately good, but not particularly masterful, going out of tune here and there. About five meters from him, a man, apparently the father, was standing observant, eagerly watching his son's performance.

The sight reminded me of the life of Wolfgang Amadeus Mozart. Mozart was "on tour" from the age of six, traveling around Europe, earning money for his father by displaying his genius at the piano. It was a marvel which attracted people's attention, but the admiration waned with the growth of the great composer. The novelty value was diminished as Mozart's height increased and he became an ordinary young man. The real struggle of Mozart's life, to have people acknowledge that he was a serious musician to be appreciated on genuine merits rather than as a "small chap" playing the piano masterfully, started there.

As some approached the trumpet boy and showed their appreciation with the sound of dropping coins, I wondered what it would have felt like to witness the very young Mozart in performance, eagerly trying to please people all around. I would have liked to see the gleam in his eyes. 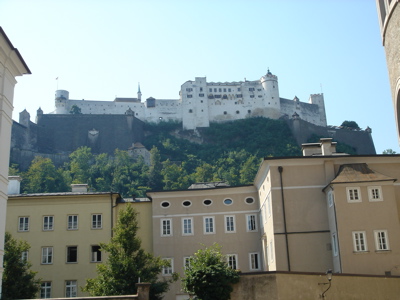